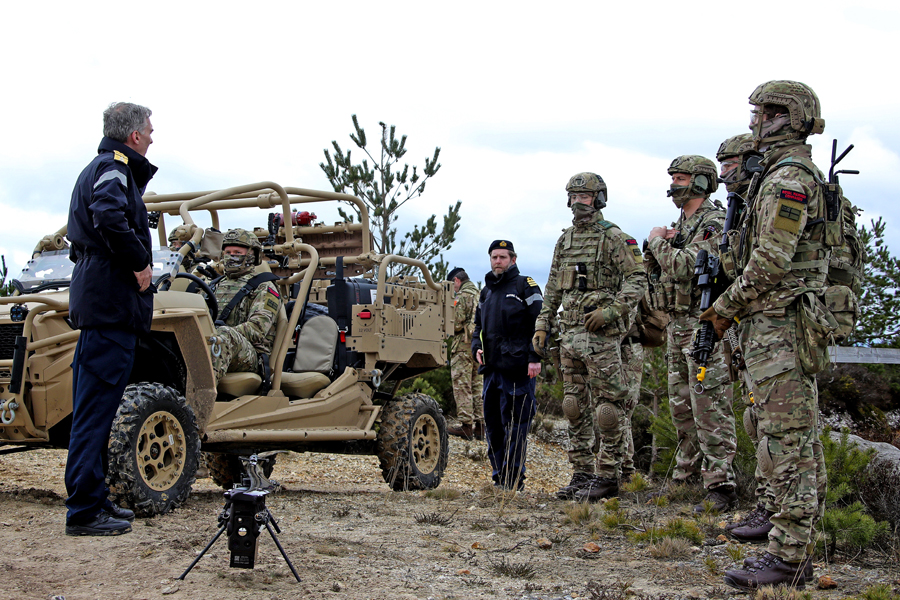 Following a weekend of UK MoD media spin some images from Friday’s restricted access media facility at Bovington have finally been released.

“Project HERMOD is a capability demonstration to mark the Defence Integrated Review (IR). Taking place on RFA Mounts Bay and at Bovington training area, it displays Multi-Domain Integration (MDI) within Defence as part of a with transformation programme. A number of stances display the cutting edge technologies that the military is adopting, including autonomous systems and advanced digital communications. This improved exploitation of technology allows agility and performance in all domains, and it keeps forces fighting effectively in the future.”

Regrettably, just like many of our independent UK specialist defence journalist colleagues, we were not invited to the event with the reason given this time for exclusion being cited as COVID-19 prevention. As this was an open air event held on a windy training area we suspect that rather than caution over virus spread being the reason, it is far more likely that the specialist defence media was excluded over fears that we might have spotted the much heralded emperor’s new IR clothes are an illusion.

We were, however, able to put forward four questions to today’s lunchtime ‘off-the-record’ MoD Virtual Briefing on Integrated Review / Command Paper and one of our questions was answered (replies are embargoed until after SoS addresses Parliament around 16:30 today). However our submitted questions on the vehicles to be used by the new Light Brigade Combat Teams and the future of Airborne insertion capability under the new order were not put to the panel. Talking to fellow independent defence journalists afterwards, consensus is that there is more spin than substance doing the rounds at the moment.

We do not really go in much for Armchair Analysis, but once we have taken a little time to look through the Defence Integrated Review in detail this time we might just make an exception.

Footnote: For those interested in the detail: the vehicle in the lead photo is a Polaris MRZR which the Commandos would like on their inventory; the Royal Marines in the lead photo are mostly wearing wearing their gucci new, and very expensive, Crye Multicam trousers rather than standard issue UK MTP camo equivalents; weapons carried are either the 5.56mm Colt Canada C-8 rifle (a 35-year old design known in British service as the L119A1/2) replacement for the 5.56mm SA80A3 or the 7.62mm L192A1; and the vehicle in front of the SoS is a borrowed GTK Boxer (possibly German from the camo).