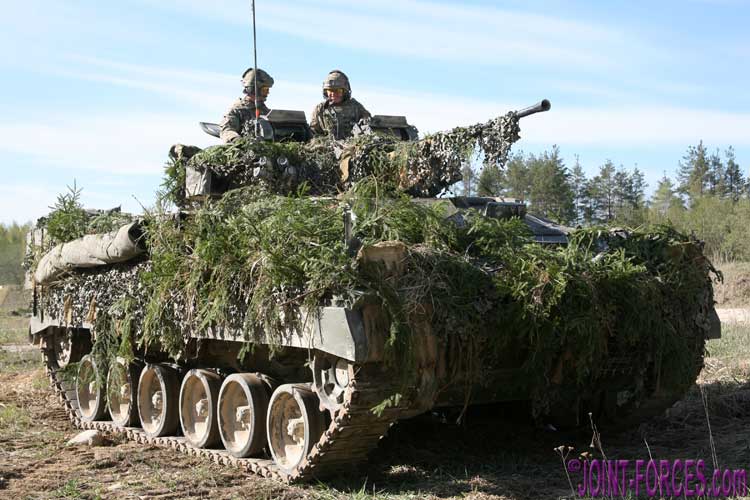 The most north-easterly of NATO’s four eFP (enhanced Forward Presence) multinational battle groups deployed in its defensive Baltic shield, which stretches from bases in Orzysz in Poland to Tapa in Estonia, has the United Kingdom as its framework nation. For the initial eight months of what was originally scheduled to be at least a two year deployment, France provided a 300-strong secondary contingent and in early 2018 Denmark joined the force – as we will see in the next article in this eFP series.

Kolgu, Estonia, 23rd March 2017, 08:45. From their forest hides the armoured vehicles of an Infantry Company from 5th Battalion The Rifles cautiously edge out towards their start line. The British infantry are transported in WARRIOR ISVs (Infantry Section Vehicles) supported by a Troop of CHALLENGER 2 main battle tanks from the Queen’s Royal Hussars. In a clearing just to their rear, the Mortar Platoon in their FV432 Armoured Personnel Carriers is forming up with the barrels of their 81mm weapons pointing out through their vehicles’ roof hatches in the direction of the enemy.

Two kilometres to the west an Infantry Company from France’s 2e Régiment d’Infanterie de Marine, transported in VBCI 8×8 Infantry Fighting Vehicles and supported by a Troop of LECLERC main battle tanks, is mirroring their British allies. Five kilometres to the north of the two infantry companies, behind a defensive screen of (German) Marder tracked Infantry Fighting Vehicles, a Yellow Forces (Lithuanian) Infantry Company is well dug in occupying prepared trenches in the forest overlooking tracks and clearings which the Blue Forces, part of a NATO eFP battle group, will need to traverse if they are to regain territory occupied by the invaders.

Part of the Phase IIIB Heavy Battle stage held towards the end of Exercise KEVADTORM (SPRING STORM) ’17, these manoeuvres were conceived primarily as a final exercise for the 2016/17 intake of Estonian Army conscripts and a major test for Estonia’s 1st Infantry Brigade designed to “increase interoperability of participating units and headquarters in order to sustain and increase combat readiness of the Defence Forces”. The secondary goal of KT17 was to validate the recently formed, British-led, multinational NATO eFP (enhanced Forward Presence) Battle Group Estonia (BG EST) under realistic exercise conditions.

On the penultimate day of Phase IIIB I joined the British company group at the start line and then, travelling in a neutral marked Estonian Defence Force Geländewagen provided along with an NCO driver for much of our time in-theatre, we passed through their lines to photograph the Yellow Forces defenders.

As the recce element from 5 RIFLES probed forwards toward the Yellow Forces lines (to avoid upsetting the neighbours, the theoretical enemy was not labelled as Red Forces) we grabbed the opportunity to photograph their attached Royal Engineers preparing a crossing point over the Valgejõgi (White River) alongside a road bridge which had been (notionally) dropped. Both a TERRIER MSV (Manoeuvre Support Vehicle) and TROJAN AVRE (Armoured Vehicle Royal Engineers) accompanied the 5 RIFLES company as it advanced.

After photographing the Germans and Estonians we then doubled back down the western axis to catch the French 2e RIMa company as they advanced on their final objective. By lunchtime this sub phase of the Heavy Battle stage was almost concluded with the overwhelming might of Blue Forces having pushed back the Yellow Forces.

The AMX LECLERC, designed and manufactured by France’s state-owned GIAT (Groupement des Industries de l’Armée de Terre) Industries, which is now known as Nexter Systems, is a 58 tonne main battle tank armed with a 120mm GIAT CN120-26/52 smoothbore cannon, 12.7mm coaxial machine gun and a 7.62mm machine gun fitted in a remote weapon mount. Powered by a 14.5 litre Wärtsilä V8 diesel engine, it has a published top speed of 72km/hr (45mph) and a range of 550km; in comparison CHALLENGER 2 weighs 62.5 tonnes in basic configuration, i.e. without appliqué armour, and has a maximum road speed of just under 60km/hr. Unlike CHALLENGER, which has a crew of four, LECLERC is crewed by just three as it has an autoloader. The tanks deployed in 2017 as part of the 2e RIMa S-GTIA belonged to 1er Régiment de Chasseurs (1er RCh) and were accompanied by at least one LECLERC DNG (Dépanneur Nouvelle Génération) armoured recovery vehicle.

The OpFor (Opposition Forces) troops on KEVADTORM ’17 facing 1st Estonian Infantry Brigade and the UK-French NATO eFP battle group consisted of a predominantly German, Lithuanian, Finnish and Polish mechanised multinational battle group plus Estonian troops, under command of 2nd Estonian Infantry Brigade. For the Phase IIIA Light Battle stage of the exercise the invading Yellow Forces OpFor, representing the fictional aggressive nation of Bothnia (situated somewhere in the Baltic Sea), operated further to the east but during the Phase IIIB Heavy Battle stage some units moved onto the Estonian central training area to provide a realistic opposition for the eFP battle group. The vehicle to the right is a Yellow Forces (German) Marder firing back at the advancing 5 RIFLES company group.

The bulk of this article was first published in the now out-of-print Combat & Survival magazine in the autumn of 2017.

In the fourth feature in this series reporting from Estonia, Carl Schulze takes over and focusses on the multinational BG EST (Battle Group Estonia) in the late spring of 2018 when it was one year into its NATO eFP defensive shield mission.