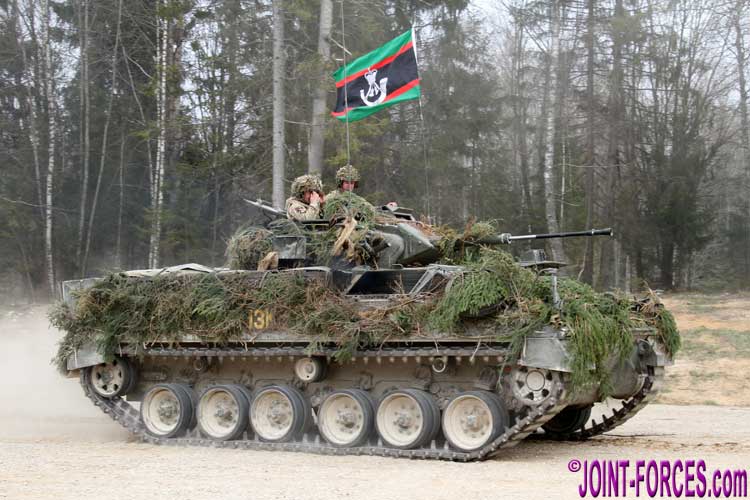 With diplomacy failing to persuade the Russian Federation to reverse its expansionism NATO, which since shortly after the end of the Cold War had presumed its borders to be secure, was forced to once again think defensively. Forced back onto a defensive footing after nearly a quarter of a century of détente following the demise of the Soviet Union and the Soviet-led Warsaw Pact, the Heads of State and Government of the 29-nation Alliance agreed in July 2016, at the Warsaw Summit, to the formation of four multinational battle groups to enhance protection in the Baltic States and Poland.

The most north-easterly battle group in this token enhanced Forward Presence (eFP) shield, stationed in northern Estonia midway between the capital city, Tallinn, and the country’s border with the Russian Federation, has the UK as its Framework Nation. In Pt.1 we looked at one of the British Army Infantry Companies, A Company from 5 RIFLES, which along with a French Marine Infantry Company and squadrons of both French and British main battle tanks initially formed the teeth of Battle Group Estonia or BG EST. In early 2018, a we will see in Pt.4, they were joined by a Danish Army formation. However there is more to an armoured battle group than just its infantry element so, before turning our attention to the final Heavy Units Battle (Phase IIIB) portion of Exercise KEVADTORM (SPRING STORM) ’17 we now concentrate a little on the supporting arms during the Light Units Battle (Phase IIIA) a few days beforehand.

Fought over public and forestry land in an arc roughly 50 kilometres east and south of the eFP base at Tapa, the Light Units Battle saw the Blue Forces of 1st Estonian Infantry Brigade, under which the NATO eFP battle group serves, defending against an attack by Yellow Forces; this OpFor battle group included both 2nd Estonian Infantry Brigade and supporting formations from Finland, Lithuania and Germany. After spending a long morning covering the Eesti Scouts, the Scoutspataljon, and the Estonian Defence League in their defensive positions on the front line near the historic village of Tudu (established 1241) we headed about 25 kilometres north to meet up with Royal Engineers from 29 Armoured Engineer Squadron.

At a key road junction and on the approaches to a strategic bridge over the Purtse River, French troops from the 2nd Marine Infantry Regiment (2e Régiment d’Infanterie de Marine or 2e RIMa) were in position to provide security for the British combat engineers should this be required. Nearby were more French and British communications and logistics troops, making preparations to block the expected Yellow Forces advance, and while we were photographing them the battle group’s Commanding Officer, Lieutenant Colonel Mark Wilson, turned up with some of his Tactical HQ staff to review the situation and be updated on the obstacles which the engineers had constructed.

After the colonel and his small team had moved on to the next location we asked the officer commanding the engineers, Lieutenant Sam Ward, to give a quick brief. Sam explained that his team had moved into the Area of Operations and down to the bridge site, which had been assessed as critical to both the eFP the battle group’s and the enemy’s manoeuvre through the area.

The sappers assessed the bridge, eyed up how they would demolish it and then set it up ready for demolitions. Then, as an alternative crossing, they also laid down an Infantry Assault Bridge which is a one-man lightweight bridge that can cross a gap up to 60 metres when fully assembled; in this instance they assembled it to cross a wet gap of 30 metres.

Summing up, the lieutenant told us: “So we’ve prepared a bridge for demolition… and we are prepared to, on orders, demolish that bridge and still allow dismounted troops to cross the Infantry Assault Bridge. Once that is complete we can then cross it ourselves, dismantle it and then leave the area, meaning we’ve denied this crossing to the enemy.”

Keen to photographically record some of the British and French logistics vehicles, once finished at the bridging site we cruised around the rear area to see what else we could spot before heading back to our Tapa base after a very long day in the field. In Pt.3 we will take a closer look at some of the French eFP contingent, and their armour, deployed as part of the British-led multinational battle group on what their Ministry of Defence has designated Operation LYNX.

The bulk of this article was first published in the now out-of-print Combat & Survival magazine in the autumn of 2017.