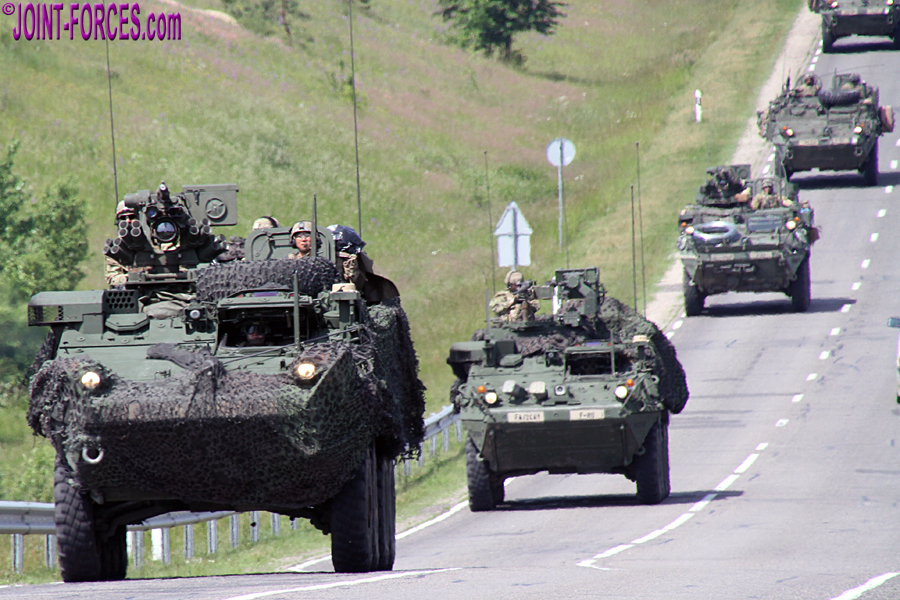 On a British Army web page created shortly after publication of the Integrated Review it was revealed Brigade Combat Teams are the way ahead.

Over the last six years we have seen US Army Infantry Brigade Combat Teams (IBCT or Stryker Brigades) for ourselves, operating from Stryker 8×8 mechanised infantry vehicles in Germany, Lithuania, Poland and the United States. It is a good concept allowing a high degree of force mobility, also used by many of our NATO Allies, and works well to complement slower-moving and heavier Armoured Brigade Combat Teams equipped with main battle tanks, tracked personnel carriers and armoured heavy artillery.

However for the British Army to go down the Brigade Combat Team route for its infantry formations, using the long overdue BOXER MIV as the primary means of transportation for the dismounts, a quantity of specialist recce, mobile gun system, close support and ambulance variants would also be required to give the desired “self-sufficient tactical units with the ability to work across the Army”.

If such IBCT units are going to be formed and properly equipped, will the British Army’s Strike Brigade concept be shelved, cast aside or converted? As specialist defence journalists are not being invited to the Integrated Review media facilities, with COVID-19 compliance and social media distancing being cited this time as the reasons for their exclusion, it will be interesting to see if any mainstream media manage to see through the fog of spin and ask the pertinent questions which need answering.

“In order to be able to operate and fight in the way described in the Future Land Combat System document, the Army will be organised differently. Brigade Combat Teams will be self-sufficient tactical units with the ability to work across the Army, partners across government, allies and industry.”

“When it does go to war, the future British Army must be more lethal and more agile than ever before, in order to fight and win, and to reduce the risk to frontline troops. Combat forces will be made up of armoured troops – using modern armoured vehicles. Mechanised and infantry soldiers will be tasked with seizing and holding complex or urban terrain. Air assault operations and raids will be able to help us win the battle in difficult terrain.

Our close combat forces will be supported at a distance with a range of lethal and non-lethal capabilities such as, artillery strikes, attack helicopters and Uncrewed Aerial Systems (UAS). Increasingly automated logistics will support troops closer to the front line, and counter-UAS, counter-missile and chemical biological radioactive and nuclear (CBRN) capabilities will provide a protective system which can identify and react to different kinds of attacks: from conventional, cyber or chemical weapons.”