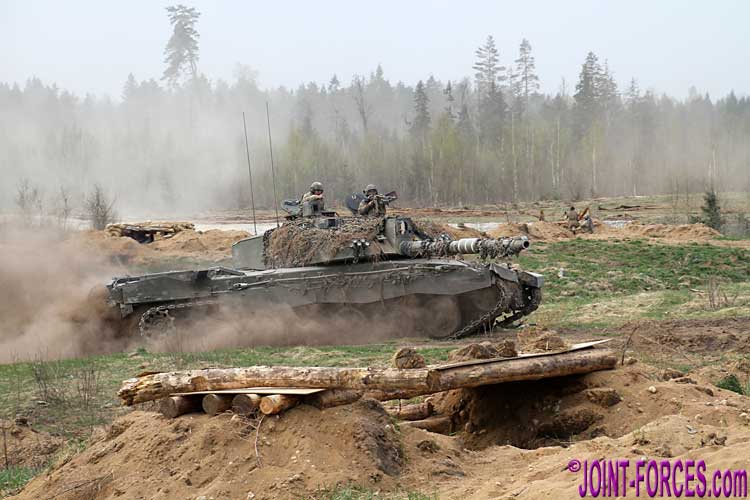 NATO responded to this Russian expansionism at the Wales Summit in September 2014, where a Joint Statement was issued by the NATO-Ukraine Commission confirming “support of Ukraine’s sovereignty and territorial integrity within its internationally recognised borders” and strongly condemning “Russia’s illegal and illegitimate self-declared ‘annexation’ of Crimea and its continued and deliberate destabilisation of eastern Ukraine in violation of international law”. Russian leaders paid scant regard to the Alliance concerns and at the NATO Warsaw Summit in July 2016 it was formally announced that the NATO military presence in the east would be strengthened by the stationing of four multinational battalions in the Baltic States of Estonia, Latvia and Lithuania plus neighbouring Poland.

The UK agreed to play a major part in this NATO enhanced Forward Presence (eFP) mission by not only providing the lead for the Estonian battle group (BG EST) but also supplying a reconnaissance component for the US-led Polish battle group (BG POL) to form an additional Troop for the US 2nd Cavalry Regiment. From the spring of 2017 under Operation CABRIT the initial, roughly 800-strong, lead component of BG EST was formed around 5th Battalion of The Rifles who were supported by a Troop of Challenger 2 main battle tanks from the Queen’s Royal Hussars plus artillery, engineer and logistics assets.

In mid-May 2017 I was able to watch and photograph A Company of 5 RIFLES undertaking an assault on prepared positions during the Light Units Battle Phase IIIA of the major multinational Exercise KEVADTORM (SPRING STORM) 2017 in Estonia. Prior to this I was also able to photograph British troops out in the field working alongside French troops serving with BG EST, and during the final Heavy Units Battle Phase IIIB I was able to observe a combined British and French attack on German and Estonian OpFor positions. In this first of three features I focus on A Company during Phase IIIA and next I plan turn my attention to the full eFP battle group on Phase IIIB. Carl Schulze will then update the story with images captured in 2018.

At the time of their initial deployment to Estonia, 5 RIFLES operated in the Armoured Infantry role as part of the Reaction Force, serving as part of 20th Armoured Infantry Brigade within 3rd [UK] Division. The approximately 600-strong battalion used the FV510 Warrior ISV (Infantry Section Vehicle) as its primary form of transportation and its personnel were used to working closely with Challenger 2 Main Battle Tanks and Royal Engineers as part of an armoured battle group. In the early summer of 2017 two of the battalion’s three Rifle Companies were deployed on Op CABRIT in Estonia alongside a third, mechanised infantry, company from France’s 2e Régiment d’Infanterie de Marine (2e RIMa) who used the 8×8 VBCI.

These images in the album were mostly shot on the morning of 20th May on the Estonian MoD Central Training Area near Tapa. As part of the work-up training for the finale of KEVADTORM ’17, A Company from 5 RIFLES, operating as a Company Group with a Troop of four Challenger 2 tanks from the Queen’s Royal Hussars in support, broke in onto an enemy-held trench position defended in platoon (minus) strength. The RIFLES broke in from the south of my position and undertook sequential platoon assaults onto the trench complex, clearing through with the tanks providing fire support and in-depth support.