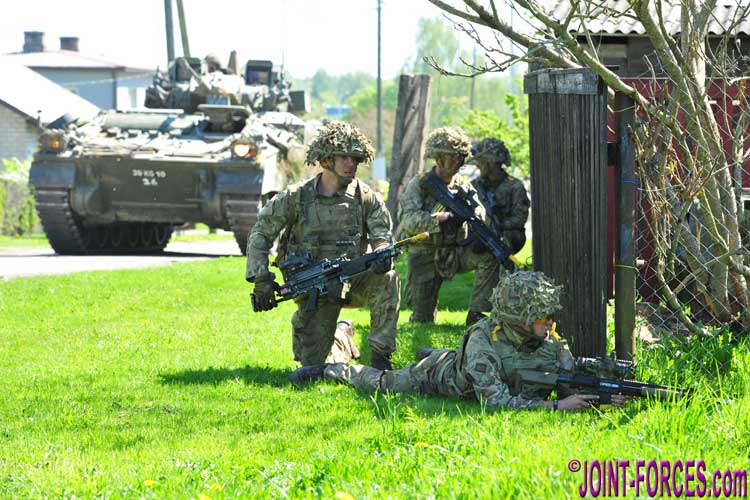 In 2018 our Senior Correspondent, Carl Schulze, visited the enhanced Forward Presence (eFP) Battle Group in Estonia after the Danes joined the British-led formation.

Since early 2017 the British Army has provided the core of the enhanced Forward Presence Battle Group Estonia (eFP BG EST) under Operation CABRIT on a persistent, rotational basis. From late 2017 through to summer 2018 the core of the battle group was provided by the 1st Battalion, The Royal Welsh.

During the 2016 Warsaw Summit the NATO member states decided to improve the forward presence in the eastern and south-eastern parts of the alliance’s territory in order to deter further Russian expansion. Following the decision, four multinational battalion-size battle groups were deployed to Estonia, Latvia, Lithuania and Poland on a rotational basis. The enhanced Forward Presence Battle Group in Estonia is led by the British Army and between October 2017 and July 2018 the armoured battle group consisted of both British and Danish troops, as well as a strategic communication civilian from Iceland, numbering a total of 987 troops.

On 30th October 2017 the 5th Battalion, The Rifles officially handed over the eFP BG EST mission to the 1st Battalion, The Royal Welsh (1 R WELSH), which inherited the role for eight month before handing it over to the 1st Battalion, The Yorkshire Regiment (1 YORKS) in July 2018. The 1st Battalion, The Royal Welsh is the only armoured infantry battalion of its regiment and its home base is Lucknow Barracks in Tidworth. The unit falls under the Bulford-based 12th Armoured Infantry Brigade that belongs to the formations commanded by the 3rd (United Kingdom) Division. The unit deployed with its Battalion Headquarters, Headquarters Company, three Armoured Infantry Companies (A, B and C) and its Fire Support Company to Estonia, with the latter including the battalion’s mortar-, reconnaissance, anti-tank and sniper platoons.

Combat Service Support for BG EST was provided by elements of the Royal Military Police, the Royal Signals, the Royal Electrical and Mechanical Engineers (REME) and the Royal Logistics Corps. The formation was also augmented by four Augusta-Westland Lynx Wildcat AH1 multi-role helicopters that could be employed for reconnaissance, command and control, transportation of troops and material, and the provision of force protection.

The accompanying photos were taken during Exercise SIIL (HEDGEHOG) 18, held in May 2018, which was one of the major training events that saw the participation of the NATO enhanced Forward Presence Battle Group Estonia alongside local Regular and Reserve Forces. From top left to bottom right:-