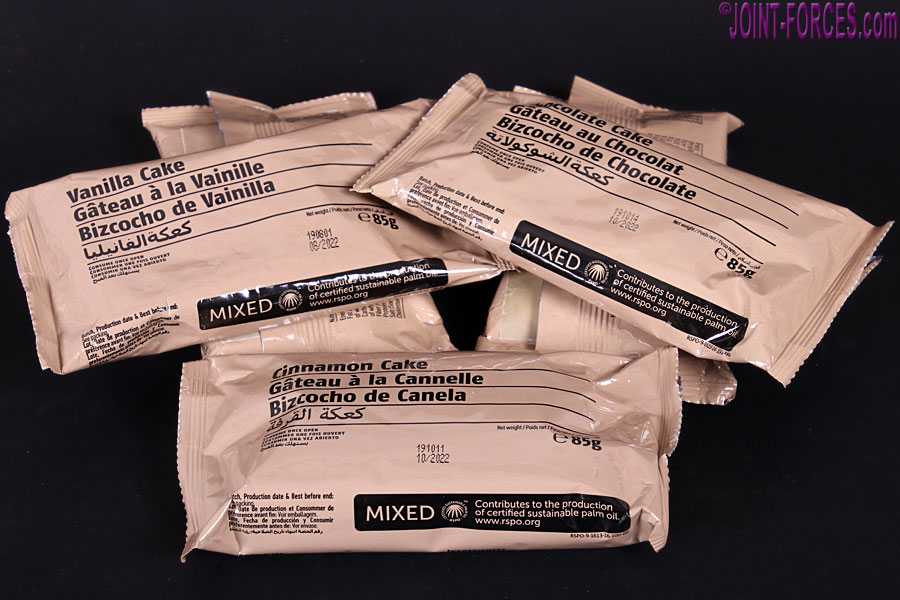 It is no great secret that I like pies… a lot. If truth be known, I also like cakes almost as much and I suspect that the marketing manager for the Spanish rations company probably realised this from my waistline, hence her asking me if I would like to try out the new expanded range of cakes which Jomipsa are now offering for rations packs; muchas gracias señorita.

As I have mentioned in recent rations reviews, until relatively recently supplying cakes and soft bread items with a long shelf-life in ration packs could be a bit of a problem, often also requiring an oxygen scavenger inside the pack to keep the texture acceptable, but recent developments mean that is now a thing of the past. These latest sponge cakes from Jomipsa have a shelf life of three years and having now eaten a couple of different examples packed 22 months ago (as well as year-old cakes) I can vouch that if stored properly they taste just as fresh as short shelf-life supermarket equivalents from the big brand name manufacturers.

At present five different flavours are produced by Jomipsa – Chocolate, Cinnamon, Lemon, Orange, and Vanilla – and I have taste tested all but the Vanilla sponge cake, which I have held back for a very rainy day. Packed in August 2019, just like the Chocolate and Cinnamon cakes, the Vanilla will be good for almost another two years (and probably longer) if stored properly so it kinda makes sense to keep it with my emergency foodstuff stocks as a treat. Talking of treats, I sampled the Cinnamon Cake with hot Devon Custard (regrettably not yet available in any military ration pack I am familiar with) and it was superb.

Each cake block weighs 85g net and provides at least 330kcal of energy. Per 100g the cakes, which on the nutrition side vary very slightly dependent on flavour, should provide a minimum of 54g of carbohydrates and 15g of fat plus 4.5g of protein and 3.5g of fibre. The most important thing, however, is that they are comfort food and provide an appetising but not too sickly (17g sugar per 100g) sweet snack inside a sturdy tan coloured foil packet. Information is provided printed on the packaging in English, French, Spanish and Arabic.

Jomipsa are bound by confidentiality clauses which prohibit them mentioning exactly which nations have procured which contents for their armed forces, but I have previously spotted one of these cakes in the 2019 batch Bahrain Defence Force 24-Hour Individual Ration Pack; the cakes are not, however, in the similar German bagged Einmannpackung ration which Jomipsa also supplied, via a French MoD procurement agency, as the Bundeswehr preference was for sweet and savoury biscuits.