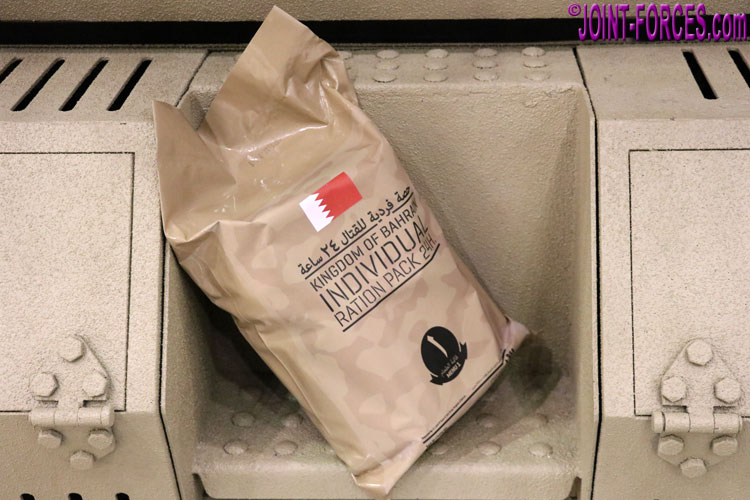 The current 24-hour Individual Ration Pack issued to the Bahrain Defence Force is packed by Jomipsa of Spain and supplied by the Al Aujan Group of Manama, writes Bob Morrison.

At first sight the Bahrain Defence Force (BDF) 24-hour individual ration pack, widely issued from 2019, appears very similar to the current German bagged Einmannpackung (EPa) One-Man Pack which we reviewed last June and when one peals the seal and looks inside the contents are broadly similar too.

There is, of course, a very good reason for the similarities between the German and Bahraini ration packs, as although the former are supplied to the Bundeswehr by the French MoD supply organisation (Economat des Armées) they are actually produced and packed by Jomipsa of Alicante. Of course there are some differences between what Northern European and Persian Gulf Region soldiers expect to find in their ration packs, and as Bahrain is a Muslim country meat products must be halal, but this is easily catered for by supplying different main course retort pouches and tweaking the selection of additional items to suit different palates; for example by swapping pineapple conserve and most dates for fruit cocktail and pork pâté.

There are currently three BDF Menu types; I sampled Menu 1, which the Jomipsa and Al Aujan team gave to me at the BIDEC 2019 defence expo and conference in Manama last November. Before opening the pack I weighed it and it tipped the scales at 1797g, which corresponded with the 1.8kg gross weight printed at the foot of the front label; incidentally, Jomipsa do not print the tough outer plastic pouch but affix large self-adhesive printed labels front and back instead. The text, front and back, is in both Arabic and English and easily understood graphics are printed alongside the text. There is also a small Bahrain flag sticker on the front, and if this is carefully peeled off it can be used to seal the folded over outer pouch between meals.

Rather than being eaten as three meals in Western style, I suspect this ration pack would be split into two for primary consumption at dawn and dusk, with the dates, fruit jellies and sweet biscuits being snacks eaten during the day to keep energy levels up. I sampled the contents over two separate days between Christmas and New Year, to give me a break from turkey, and I enjoyed everything. I started with the stew, which was a bit watery but very tasty, and I resisted the temptation to crumble biscuits into it as I might have done if consuming in the field. Flavoured with ras el hanout, the North African delicate spice mix, and with twice as much large chick peas as mutton, this dish struck me as being Moroccan-influenced. The Chicken Byriani was a mix of wild and long grain rice with chicken meat, cashews and raisins. This was, unquestionably, the tastiest ration pack retort pouch meal I have tasted over the last three decades… and my waistline indicates I have sampled quite a few ration packs.

This ration pack may not be to everybody’s personal taste, but if like me you have adventurous tastebuds and prefer interesting over bland, I heartily recommend the Bahrain Defence Force 24-hour individual ration pack Menu 1. The only downside is that I might need to wait a couple of years to sample Menus 2 and 3.

Above: Contents of the two smaller items bags [©BM]