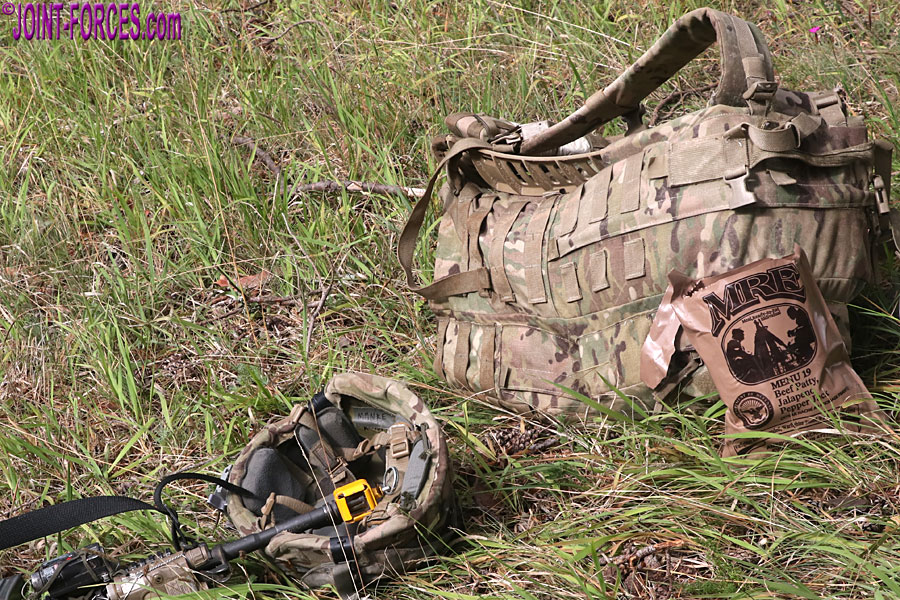 For this twelfth article on US MRE rations I am taking an unexpected second bite at the Year 39 or XXXIX Batch (excuse the pun) cherry, writes Bob Morrison.

The last time I looked at production batch US MRE (Meal Ready to Eat) ration packs, just before last Christmas, I presumed that the next time I would have another chance to sample one would be during the planned US Army DEFENDER-Europe 20 (DEF20) deployment and that it would most likely be a Year 40 / Batch XL meal which I picked up.

Back in late December COVID-19 was in its infancy and we had no idea the havoc the new virus would generate, or that much of the world would go into Lockdown once a global pandemic was declared in March. As a result of the virus all US Army overseas deployments and exercise were immediately scaled back and/or rescheduled and DEF20 was one of the first casualties. More recently, however, the pace of training exercises has picked up again, albeit with some necessary safety restrictions, but as only a fraction of the 20,000+ US troops expected to cross the Atlantic this spring actually did so there has not been the anticipated draw on MRE stocks and as recently as late August troops training in the field were still consuming Batch XXXIX meals.

While out on Drawsko Pomorskie (Poland) and Hohenfels (Germany) Training Areas in August I paid close attention to what the US troops were eating (I will cover Polish rations in a separate article) and in addition to sampling some in the field I was able to both ‘liberate’ a couple of complete MREs for review and also bring home one of my favourite pouches – the Hash Brown Potatoes with Bacon from Menu 20. Most years a couple of meals are dropped from the production list, partly to bring a little variety and often on account of feedback from the end users, and for Batch XL it is Italian Sausage that will be found in Menu 20. A pouch called Hashbrown Potatoes is included as a secondary item in the latest Menu 17, to replace the Muffin Top, but I suspect this will not be the same as my favourite MRE breakfast pouch. Ho hum.

The two meals I was able to bring back from the summer field exercises were Menu 18 (Beef Ravioli In Meat Sauce) and Menu 23 (Pizza Slice, Pepperoni) from Case B. From the dates stamped on the individual contents it would appear that both Menu pouches were packed, by The Wornick Company, around late June 2019. For those coming to the MRE topic for the first time, there are 24 individual Menus which are delivered in outer cartons, designated Case A and Case B, each holding 12 different outer pouches. It is not unusual to see one or more of these cartons, normally of the same type as they appear to be delivered on single type pallets, stowed externally on armoured vehicles or in the cargo compartment of Hum-vees etc. with one carton providing three meals for four troops for one day.

My Menu 18 contained the following individually packaged edible components: Beef Ravioli in Meat Sauce, as the main item or entrée; Hot Sauce sachet; Muffin Top, chocolate and banana flavoured with nuts; Snack Bread; Cheddar Cheese Spread; Candy – in this case a bag of M&Ms; and a sachet of Fortified Carbohydrate Beverage Powder. Inside the tan outer bag there was also a Spoon, Accessory Packet C, a Flameless Ration Heater, a Paperboard Sleeve (for use with the FRH) and a Hot Beverage Bag (for heating the reconstituted drink powder).

The Menu 23 which I picked up contained the following edible components: Pepperoni Pizza Slice; Cherry Blueberry Cobbler, as desert; Vegetable Crackers; Jalapeño Cheddar Cheese Spread; an Oatmeal Cookie; and Chocolate Protein Drink Powder in a bottle-shaped pouch. Inside the tan outer bag this time there was also a Spoon, Accessory Packet A, a Flameless Ration Heater, a Paperboard Sleeve; and a Hot Beverage Bag.

One of three, mostly similar, bagged Accessory Packs is supplied inside each Batch XXXIX MRE pack. Components common to all three are: 2x Chewing Gum, 1x Moist Towelette, a Toilet Tissue and a sachet of Salt. Packs A and C contain Dried Coffee and Powdered Creamer sachets and Sugar or Sweetener respectively, whereas Pack B has a sachet of beverage powder (in one of three flavours) instead. Packet A contains a book of matches.

The Pepperoni Pizza Slice is well-liked by troops meaning Menu 23 is often one of the first to be chosen when Carton B is opened, so I was glad to get the chance to try this one out for myself. Soft baked items like breads and pizza are not the easiest of long shelf-life foodstuffs to get right, but over the last few years the food scientists have made massive strides forward and when heated (like other main meal components it can also be eaten cold if necessary) this pizza slice is not at all bad. As I like spicy I was tempted to add the hot pepper sauce from Menu 18 after heating, but resisted the urge to ensure my taste buds were not overpowered when trying the pizza; I am glad I sampled it straight out the pouch as it was tastier than I had envisaged.

I have sampled the Cherry Blueberry Cobbler before, so knew precisely what I was getting with the Menu 23 dessert pouch – just think black cherry crumble without the crispy topping. Again I resisted temptation as that little demon on my left shoulder was whispering “add vanilla ice-cream to it!” One day I will give in to that little voice, but even without ice-cream, or Devon custard, it was a very tasty and warming pudding.

Menu 18, in comparison, struck me as being a rather bland meal; not exactly unusual for an MRE, though some main courses have certainly been getting more tasty and cosmopolitan over the years. In my opinion the Beef Ravioli in Meat Sauce was on a par with UK supermarket own-label tinned equivalents and pretty uninspiring, so I can see why the Hot Sauce sachet was included with this meal. I separately sampled the sauce, made with Red Tabasco and Habanero peppers, and it certainly has a kick (almost on a par with the Hot Diggidy Dog sauce found in some UK 24-hour ration packs). The chocolate and banana flavour Muffin Top was okay, but I much preferred the fruit cobbler in the other pack.

In the past Crackers (savoury biscuits) were included in most MREs, but these days Tortillas are almost as numerous across the 24 standard meal packs and Snack Bread is now appearing in several Menus. The Snack Bread in Menu 18 was shaped like a slice of loaf but was a little more sponge-like in consistency, though nothing like as sweet as sponge, and was accompanied by a sachet of Cheddar Cheese Spread; in natural light this processed cheese paste is almost neon orange in colour but it actually tastes reasonably okay when spread on crackers or bread. The Vegetable Crackers (flavoured with carrot, onion, peppers, celery and tomato) came in the same two blocks of four format as standard MRE Crackers and in this case were accompanied by Jalapeño Cheddar Cheese Spread. I think I prefer the snack bread over the crackers.

A Flameless Ration Heater is provided in each standard MRE and as I have previously covered these (see FRH ~ Flameless Ration Heater) I don’t plan to repeat myself here, save to say that while I usually heat up rations meals for review in a pan of simmering water and set the FRH to one side for my ‘Survival Stock’ in this case I heated up the Pizza Slice and then the Cherry Cobbler in the recommended manner using the same heater. If used properly, along with a Paperboard Sleeve and propped at an angle “against a rock or something” as per the instructions, sufficient heat usually remains to warm up dessert when one is eating the main course; incidentally, can anyone explain why our friends to the West use the French term for a starter / appetiser course – i.e. entrée – to describe the main course?

Finally to the Paperboard Sleeves used in the heating process and also to hold the initially hot meal pouch in order to protect bare hands. It is now usual to find nutrition information for one of the retort pouch meals on one side and different dietary facts on the other side which can make for interesting reading while chomping. You get a lot, in more ways than one, inside the modern MRE.