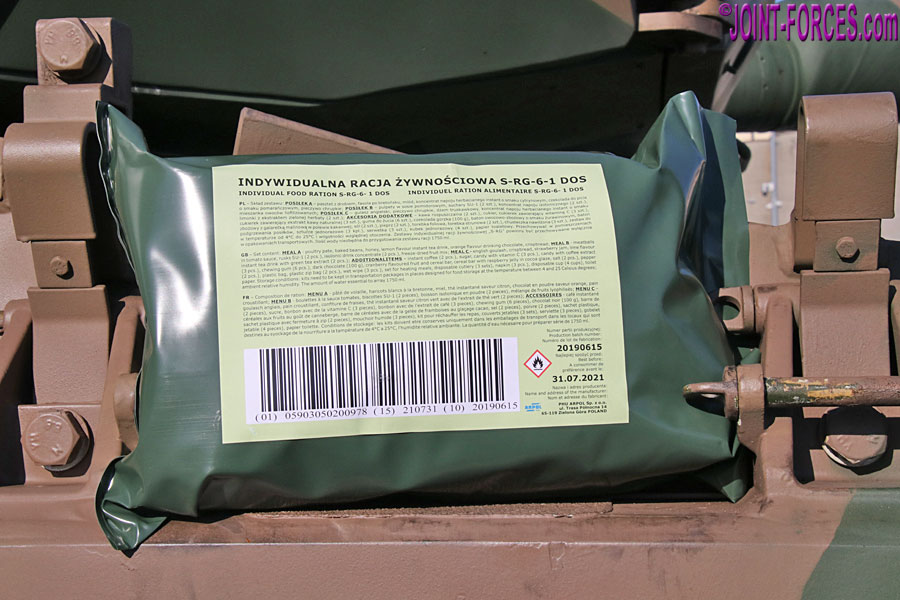 I have previously covered both the 24-hour (IRŻ S-RG) and single meal ( IRŻ S-R) Polish ration packs, in the Field Rations 02 feature, and also the similar one-meal (IRŻ 1-Posiłkowa) pack marketed commercially by KADAR in Field Rations 03, but this time I have been able to talk to a senior officer responsible for developing Poland’s military feeding system to learn more from the source.

When out the MSPO defence expo in Kielce this September, I was briefed on current Polish ration packs by the Deputy Commander of the Military Research & Development Center For Food Services (Wojskowy Ośrodek Badawczo-Wdrożeniowy Służby Żywnościowej or WOB-WSŻ), who also gave me the IRŻ S-RG featured here plus several packs of the new style army biscuits to try out. While there have been minor contents tweaks to the 24-hour pack since the previously featured examples issued in 2016 (Menus S-RG-4 and S-RG-5), the pack featured here (Menu S-RG-6) is virtually identical so I will not repeat myself too much.

However I can confirm from documentation provided at MSPO that: there are seven different menus; each pack provides between 3,600 and 3,800kcal; pack weight is no greater than 2,100g; and shelf-life is 24 months minimum. According to the [auto-translated] list inside my pack (and also in brief on the outside label in Polish, English and French) contents were intended to be broken down into three Meals plus Additional Accessories. The illustrated Menu S-RG-6, packed 15 June 2019 and Best Before 31 July 2021, contained:-

Most contents of IRŻ Menu S-RG-6 are not too dissimilar from previously covered items, but the Miezzanka Owócow Liofilizowanych (Mixture of Freeze-dried Fruits) was a little different. After emptying the pouch into a clear dish to photograph the contents in their freeze-dried state, put them back and reconstituted with a little water, zipped the pouch and left it for ten minutes before decanting into the clear dish again to photograph the resultant mush. As I did not have any instructions I was unsure of how much water to add, and probably overdid things, but the results were tasty enough; having said that, I would probably have preferred a more conventional retort pouch of fruit cocktail / macedonia in syrup.

One item which slightly puzzled me this time was the 190g can of Gulasz Angielski or English Goulash. This turned out to be a sort of pork luncheon meat which, like the poultry pâté, I spread onto the crispbread. While I am not really a fan of crispbread, and especially the light ‘styrofoam’ version, I prefer it to the black bread found in some northern European ration packs and it lasts longer than more conventional white bread would. Mind you, when pâté or Gulasz Angielski is spread well onto the slices crispbread does not taste too bad.

It is a long-standing joke with troops that the SU-1 hard biscuits or rusks, which have long been supplied in Polish rations in 45g packs containing two slabs, have a secondary use as trauma plates in body armour as it almost takes a jackhammer to break them. However these are soon likely to be a thing of the past as the latest WOB-WSŻ development is a 90g pack containing six thinner, but taste-wise identical, biscuits which both break easier and also ‘dunk’ better in soup or gravy. I have tried a couple of packs of these SUCHARY SPECJALNE SU-2 biscuits and got on with them much better than their thicker predecessors; I have put the other packs into my Survival Larder as not only do they provide almost 350kcal per pack but they should last well beyond the expiry date of August 2021.

I suspect this is likely to be the last article in this section for a little while, as several defence expos I had lined up after MSPO were cancelled or postponed, we completely lost the main 2020 summer militaria shows in the UK (where surplus rations often pop up), and pandemic travel restrictions mean neither Carl nor myself expect to cover military exercises away from our home countries for some time to come. However, to slightly misquote the late Sean Connery, never say never… as who knows what the future holds?