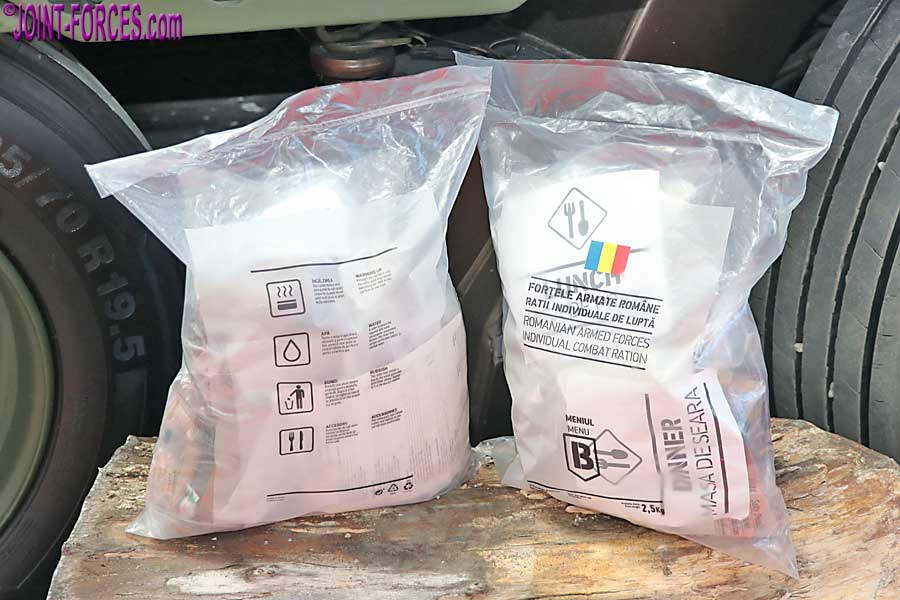 Defence expos like the Spanish FEINDEF in Madrid and Romanian BSDA in Bucharest are a good way to pick up rations news snippets, writes Bob Morrison.

International military, and humanitarian assistance, ration pack production and supply is a constantly evolving topic which we try to keep up with even though, just like the ubiquitous utility vehicle, it is one of those subjects that the average soldier pretty much takes for granted… until or unless it doesn’t turn up when expected.

Ask the average soldier in the field which supplier or packer produced the military ration they have just consumed and the chances are, even though the company’s name was most likely printed on the outer carton or bag and on many individual items, the consumer will probably not be able to recall it. If Carl or myself are fortunate enough to pick up a spare ration pack while on our travels, or we are issued with one when embedded with troops we are reporting on, so long as we have not previously covered it in this section (or there are noticeable differences from last time we tried that type) I will usually analyse and then taste test. However we simply do not have the resources to work with every army we would like to, and not all armies issue their troops with combat ration packs (plus some defence ministry media comms officials either treat the topic of ration packs with almost as much secrecy as they do secure communications equipment or are so removed from front line soldiering that they do not know what is actually issued) so also keeping our ears open and nose close to the ground at expos can sometimes pay dividends. But I digress.

For over 15 years Spanish Army rations have been supplied by the UTE Raciones consortium of three companies: JOMIPSA of Alicante, which has been producing combat ration constituents for 40 years, TEÓGENES RUIZ of Tarancón, a supermarket production and distribution company; and ALONSO HIPERCAS of Alcorcón, a wholesale food supplier. Normally the companies jointly display as UTE at FEINDEF, but JOMIPSA sometimes also displays individually at international expos; the latter being the case at the BSDA 2022 (Black Sea Defence Association) expo in Bucharest in May. It was at this show where we spotted the JOMIPSA 24-hour Individual Combat Rations (Rații Individuale de Luptă) offering for the Romanian Armed Forces. A modular, high energy pack comprising three meals (breakfast, lunch and dinner) providing 5,000kcal, this 2.5kg pack included: main meal pouches rather than tins; cereal and energy bars; biscuits with jams and spreads; one of the now near legendary JOMIPSA sponge cakes; drinks powders and tea; and accessories, including three Flameless Ration Heaters.

Although the Spanish Armed Forces also issue a high energy 5,000 kcal 24-hour Individual Light Ration Pack (Ración Individual Ligera 24H) specifically for cold climate deployments, this one uses freeze-dried components but their primary individual ration packs (Ración Individual de Combate) contain more traditional canned primary components. On the JOMIPSA stand at BSDA 2022 two new 415g main meal tins ~ Pasta Bolognaise or Pasta A La Boloñesa and Chicken Curry or Arroz con Pollo Al Curry ~ were shown, though unfortunately as there was only one example of each on display I couldn’t really blag them for a taste test. Ideally these cans should be warmed for 15 minutes, though as the meal is fully cooked it can be eaten cold if necessary, and energy value is in excess of 400kcal.

Now something a little different involving JOMIPSA canned ration components: In my ‘set aside for a rainy day’ cupboard, which doubles as my emergency survival foodstuffs cache, I had one Spanish Armed Forces (Fuerzas Armadas) ration can approaching its BBE (Best Before End) date and two others which had well and truly exceeded theirs. Fortunately with tinned goods, so long as the integrity of the container is sound and it is not visibly damaged the contents will usually be perfectly edible far beyond their marked ‘best by’ date; however, if in doubt let your nose make the initial assessment before tasting.

As these three tins all had a Mediterranean theme, and as I fancied a taste of Andalucia at the end of our recent very hot weather spell in south-west England, I drained the cans of excess oil and tipped them into one of my WILDO bowls then after chilling the dish in fridge I opened a bottle of vino tinto from the Valdepeñas region. You can probably work most of this out for yourself, but 115g Atún Blanco En Aceite Vegetal, 115g Sardinas En Tomate and 350g Judías Con Tomate translates as White Tuna In Vegetable Oil, Sardines In Tomato and Beans With Tomato.

With just a little seasoning my ‘Mediterranean hash’ was delicious, bringing back memories of several trips with Ramilla to Almuñécar, a slightly off-the-beaten-track historic town on a quiet stretch of Spain’s southern coast, and of pleasantly warm evenings on the traditional tapas trail.

Featured, JOMIPSA, Rations, UTE Raciones
You may also like