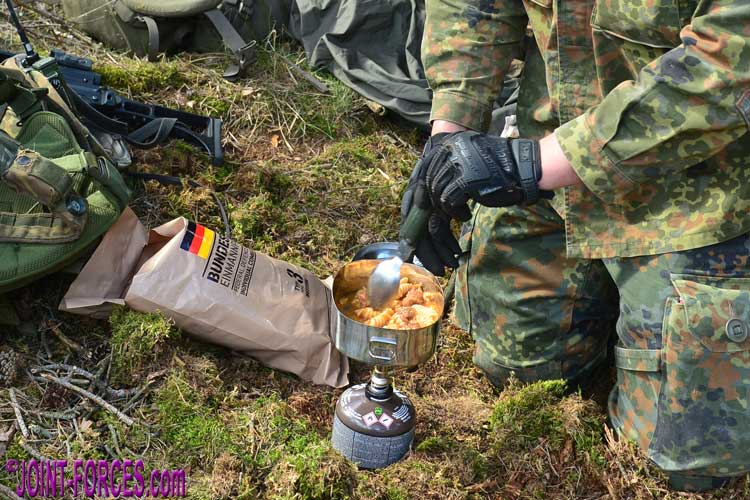 In this last of three articles we now look at the very latest Bundeswehr Einmannpackung (One Man Pack) currently on issue to German troops on exercise, writes Bob Morrison.

Our man Schulze was issued with this new version of the Einmannpackung, or EPa, when deployed with the Bundeswehr on the binational GREEN GRIFFIN airborne exercise in May and in addition to taste-testing it for myself I have also talked to the manufacturer to determine some basic info which they were able to talk about without breaching any client confidentiality rules.

The first most noticeable thing about this 24-hour ration pack is that the components are contained in an outer pouch which both looks and feels very similar to that used for the US MRE, though of course as the German pack contains three meals’ worth of food, rather than the one meal inside the American pouch, it is considerably larger and weighs 1.9kg. On the front of the pouch there is a peel-off German tricolour (possibly to allow for resealing if the top is rolled over) plus a basic description and on the back are German and English notes on heating, water sterilisation and accessories. The surprise comes at the bottom of the rear face where it is stated that the ration is distributed by Economat des Armées, which is the French Ministry of Defence supply organisation.

When one opens the new Bundeswehr Einmannpackung to get at the contents, the surprises keep coming. Not only have the main meal foil-topped alloy meal trays of old vanished, now replaced by retort pouches, but almost all of the components are Spanish and produced or supplied by JOMIPSA of Alicante; this is one of three companies in the consortium which produces rations for the Spanish Armed Forces. Our contacts at JOMIPSA were unable to explain the French connection, as they had not been directly involved in the Bundeswehr contract, but suggested it is probably something to do with the European Union tendering process. They were, however, able to confirm that their company is involved in the supply of six different Menus of which three are designated Western, two are Halal and one is Vegetarian.

The ration I recently taste tested was Typ (Menu) 3 Western, packed 10 September 2018 with a Best Before End date of September 2020; though most individual components had much longer shelf lives. The two main meals retort pouches were Cassoulet and Pasta With Beef, and there were three Spanish commercial brand canned components – Cooked Ham Paste, Pork Liver Pâté and Fruit Salad – with German language stickers on the base of the spreads. The rye bread which previously featured in German ration packs has now gone but the biscuits and jam are still there, however there are now five individual packs of four biscuits (both sweet and savoury) rather than a single pack of twelve, and both jam pots in my ration pack were Peach. Secondary components included: 4x Lemon Isotonic Drink Powders; 2x 25g Dark Chocolate; 10x Chewing Gum; 2x Moist Wipes; 1x Tissue Pack; and 4x Aquatabs for sterilising water. The hot drinks kit consisted of: 4x Coffee Powder; 2x Tea Bags; 4x Creamer; and 6x Sugar. The drinks sachets were contained in two zip-lock bags, intended to be reused for holding waste packaging, and there were also four Salt sachets and a Contents List included. Total energy provided, assuming all edible contents are consumed, is 3447kcal.

Although described in English as Cassoulet, the classic French stew from Languedoc, and in German as Bohneneintopf or Bean Stew, I reckon this dish is markedly more Spanish in taste. I enjoyed it, but if eating it again I’d possibly perk it up a bit with some chilli sauce. The Pasta with Beef tasted exactly as I presumed it would, though there was more beef in it than I expected, and it was interesting to note that the pack carried the Arabic marking showing it to be Halal Approved. On the whole I enjoyed this new Einmannpackung, but I am a little surprised that it did not contain cereal bars or any of the snacks (other than biscuits and paste) that most other NATO ration packs now include.

Update: We subsequently discovered that this non-typical bagged Bundeswehr ration pack was sourced outside of the usual supply system to ensure sufficient increased stocks would be available to cover the period when the Bundeswehr assumed lead nation status for the NATO VJTF (Very High Readiness Joint Task Force) commitment during 2019.