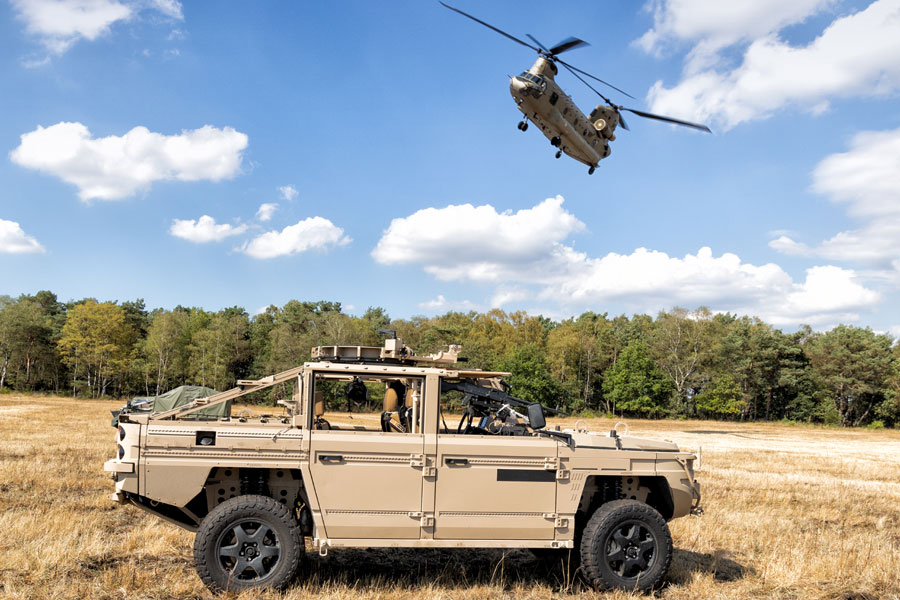 This third part of our Defenture ATTV story was delayed by the 19th December announcement of the Dutch Project 12kN Interim contract award, writes Bob Morrison.

When Carl and myself, along with five other specialist defence journalists, visited the Defenture design and production facilities in Tiel at the start of December we were both aware that the company had hopes of follow-on sales of its GRF / VECTOR Air-Transportable Tactical Vehicle (ATTV) but at that time the Dutch Project 12kN Interim contract had not yet been announced.

It was predominantly the opportunity to learn much more background detail about the Defenture link-up with Krauss-Maffei Wegmann for the joint German and Netherlands Luftlande or LuLa Platform, aka LLP, requirement [see:- KMW and DEFENTURE Sign LuLa MoU] which prompted us both to take time out of our otherwise quite busy work schedules to accept the company’s invitation to visit the factory and test track in the Netherlands. This joint programme originally commenced as a Bundeswehr requirement to re-equip and modernise the DSK (Division Schnelle Kräfte or Rapid Forces Division) with the Dutch Army’s 11 Airmobile Brigade (11 Luchtmobiele Brigade) contribution to this division having gone its own way in 2018 and procured its own fleet of vehicles [see:- Dutch Airborne Choose Mercedes-Benz G-Class]. However in late 2021 the Dutch MoD cancelled the already well behind schedule contract for an initial 500+ vehicles in three different categories after Mercedes-Benz was unable to confirm they could deliver the vehicles to meet the required specifications within the previously agreed price. With the need to provide an interim batch of suitable air-transportable vehicles for 11 Airmobile Brigade now deemed urgent, it was decided to rapidly procure 41 more of the GRF / VECTOR [see:- New Defenture VECTOR Contract ~ Dutch Project 12kN Interim] rather than wait until the LuLa Platform enters full service around 2027.

Already operationally proven with Dutch Special Operations Forces, who call the vehicle VECTOR, the Defenture GRF platform is said by KMW and Defenture to be fully compliant and verified for the key air transportability requirement of the LuLa / LLP programme. The integral lifting eyes for external transport are a permanent part of the vehicle’s suspension mounts, and therefore of the chassis, allowing for perfect centre of gravity, balance and weight distribution. This minimises movement and enhances in-flight stability when underslung, either tandem hook or single point, and the vehicle was also designed from the very outset be carried internally by CH47 Chinook as not only was its basic envelope tailored to suit the in-service helicopter’s dimensions but its ring mount was engineered to be foldable to fit this envelope at early ‘drawing board’ stage. GRF / VECTOR is not a modified civilian SUV (Sports Utility Vehicle) or commercial 4×4 pick-up truck but a bespoke military vehicle designed specifically with frontline long range operations in mind.

Of course there is always likely to be an initial cost disadvantage to procuring a bespoke military vehicle rather than taking a mass market civilian vehicle and modifying it to try to fulfil the sort of expectations elite combat troops will have of it in the theatre of operations. However it is a very short-sighted defence procurement organisation indeed that prioritises low initial cost over equipment being fit for purpose and allows beancounters, rather than soldiers with relevant and recent frontline experience, to dictate purchases.

Back to the suitability of GRF / VECTOR for the LuLa requirement. Henk van der Scheer, the Defenture CEO, says: “Airborne troops need a flexible, modular, high-performance proven solution for a broad range of operations. With a truly battlefield-proven light tactical and air-transportable vehicle with the highest level of mobility, the mobile platform as such is no longer a limitation in the stressful and challenging tasks executed by the international Airborne troops. According to these needs, we have built, in close cooperation with, Special Operation Forces from the Netherlands, Germany and Switzerland, the safest and most efficient interoperable and familiarised mobility solution ever”.

Gerard Rond, off-road driving expert and one of the founders of Defenture, says: “When developing our GRF, we have used our motorsport and Paris Dakar rally experience, in which it is not just important to have the fastest vehicle, but you also have to be sure that you will always make it to the Finish, despite the harshness of terrain and environment. In close collaboration with our international end users, our entire and complete design is built to avoid failure that can lead to hazardous situations, especially during missions in hostile territories. So forces who face the greatest danger, get the safest solution.”

By combining forces KMW & Defenture say they are are developing not just a vehicle, but a set of fully integrated platforms in different configurations to meet all the specific German and Dutch Luftlande requirements. Ralf Ketzel, CEO of KMW, is on record as saying “Our German-Dutch cooperation sets a strong signal that European cooperation can work – also in the participation of national industries, like in this German-Dutch procurement project.”

In addition to the German / Dutch LLP requirement, which is expected to lead to between 1500 and 3000 units in four basic variants being ordered around third quarter 2023, Defenture are currently working on the AGF2 / UFK for Germany’s KSK (Kommando Spezialkräfte or Special Forces Command). Codenamed MAMMOTH, and essentially an upscaled 9-tonne maximum GVW version of VECTOR, the AGF 2 (Mittleres Aufklärungs- und Gefechtsfahrzeug Spezialkräfte or Medium Special Forces Reconnaissance and Combat Vehicle) and UFK (Mittleres Taktisches Unterstützungsfahrzeug Kommando Spezialkräfte or Medium Tactical Special Forces Support Vehicle) programmes will see the delivery of four prototype vehicles in different configurations a little later this year with serial production of up to 80 vehicles expected to commence next year [for more see:- Defenture Mammoth Developed For German KSK]. This one is just a little bit sensitive, and as a result we were understandably not permitted to enter either the design office or the brand new production hall at the company’s Tiel headquarters.