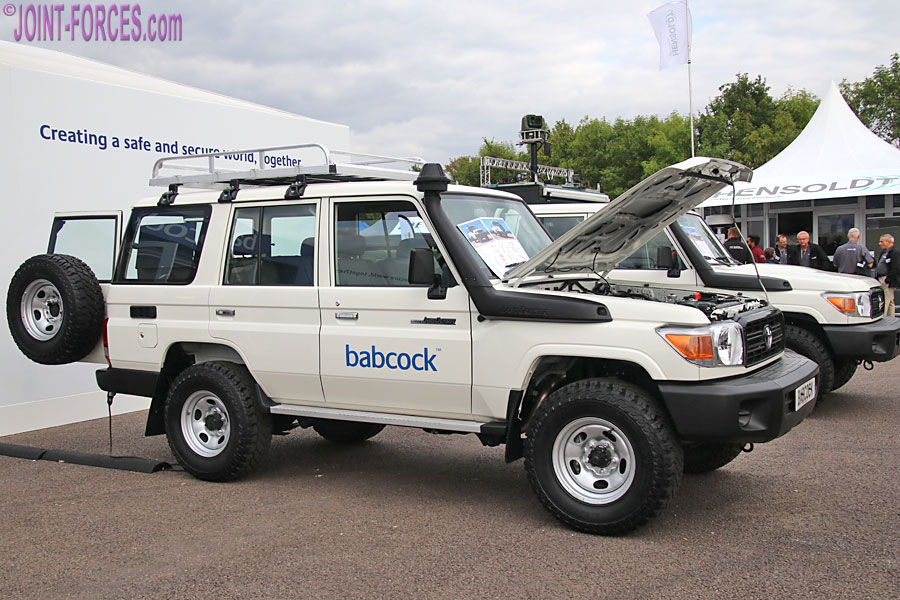 Surprising as it may seem, the latest version of the now near forty year old Land Cruiser J70 / 70 Series is actually seen by some as a serious contender for the UK Forces GSUP programme to replace the 25+ year old, and not manufactured since around 2000, Land Rover TUM (Truck Utility Medium) or Wolf 110 model; although the Land Rover Defender 110 was manufactured until 2016, the TUM version had a different chassis design and was only produced in quantity for the British and Dutch Armed Forces.

Initially a vehicle type proposed by Toyota GB Ltd, one of the 19 companies invited in January 1992 to tender for the UK TUL/TUM anticipated replacement of around 6463 leaf-sprung Series III Land Rovers, the Land Cruiser was not one of the three vehicles types eventually called forward for the competitive trials phase of the competition as it was not deemed to fully meet the MoD requirements. Roll forward three decades however, with effectively only the latest versions of the Mercedes-Benz Geländewagen or G-Class and the Nissan Patrol (plus the wider and heavier AM General HMMWV) still being produced out of those proposed by the other 18 original invitees, and the Land Cruiser cannot be overlooked if the MoD is looking to continue down the slightly militarised and comparatively low cost modified commercial utility vehicle route rather than buying a more rugged and consequently more costly bespoke military vehicle such as, to give just two topical examples, the Supacat JACKAL or Defenture VECTOR.

The Land Cruiser 70 Series of 2023, although still essentially a very basic utility truck with a reputation for being reliable and easy to maintain, has evolved slightly from the mid-1980s model variants offered for the UK Truck Utility Light and Truck Utility Medium (TUL/TUM) requirement of 1992 but visually it is very similar. In 1999, fifteen years after production commenced, the leaf-sprung solid front axle was replaced by independent coil suspension (though to this day leaf springs are still fitted at the the rear) and the previously quite distinctive front wing design carried forward from earlier models was dropped. Recent specification changes to safety and emission requirements in Australia, where the 70 Series is a very popular utility vehicle in the outback, and in some other major export markets have meant the Land Cruiser has evolved closer to meeting what were previously more stringent European and US standards so the Toyota vehicle is possibly beginning to look more attractive to more military fleet buyers than it may have been a few years ago. Of course to Third World buyers with low budgets who needed a simple pick-up truck for military use, buying a fleet of Land Cruisers has always been an easy decision… hence also the legions of ‘technicals’ taking stage front in low intensity conflicts around the globe for the last five or six decades, not to mention all those white vehicles transporting NGO medical and aid agency personnel in the same war-torn and crisis-hit theatres.

The Land Cruisers on prominent display at DVD 2022, held on Millbrook Proving Ground back in September, carried the corporate marking of the UK Government contractor Babcock International and were supported by the Toyota Gibraltar sales team. As was probably only to be expected at an expo which had so many potential competitors in attendance, the Babcock team were not announcing their precise plans for the UK GSUP (and/or other potential / forthcoming) light vehicle requirements, but the sales pitch gave the impression that they considered they could fill all and any UK MoD home and overseas needs for small 4×4 utilities by supplying a combination of types such as the Jeep J8 and Land Cruiser. Only time will tell on that score.

The two Land Cruisers attracting attention on the Babcock stand on the Steering Pad display area at DVD 2022 were a five-door J76 Station Wagon and a four-door J79 Double Cab Pick-up Truck. According to the Toyota Gibraltar Stockholdings data sheet for the J76, this 2730mm wheelbase version measures 4720 x 1770 x 1955mm high and maximum cargo space with all but the front seats folded is 1400 x 1525 x 1115mm high. Approach and departure angles are 30° and 25° respectively, ramp breakover is 27°, side slope angle is 41°, ground clearance under the differential is 230mm and fording depth is 700mm. Up to ten occupants, including driver, can be transported two inward facing bench seats are fitted at the rear, but this configuration would probably not comply with UK safety regulations so it is more likely that the rear compartment would be used for cargo and if configured for this the maximum load area would measure 1525mm wide by 940mm deep.

According to the data sheet presented at DVD 2022, the engine fitted to the five-door J76 was the Toyota 1HZ 4164cc in-line six-cylinder diesel producing 129bhp at 3800rpm, but I suspect this would probably not be the option offered for UK GSUP. With this power pack the Gross Vehicle Weight is 3060kg, of which the available payload would be 870kg. No indication of top speed or road range was given, but the fuel tank capacity was listed as being 130 litres. Electrics were shown as being 12 Volt. The French T4 VLTP NP, introduced as an interim purchase to tide over until the Arquus VT4 version of the Ford Everest was introduced, is a slightly militarised version of this vehicle; see French Technamm Masstech T4 VLTP NP for more.