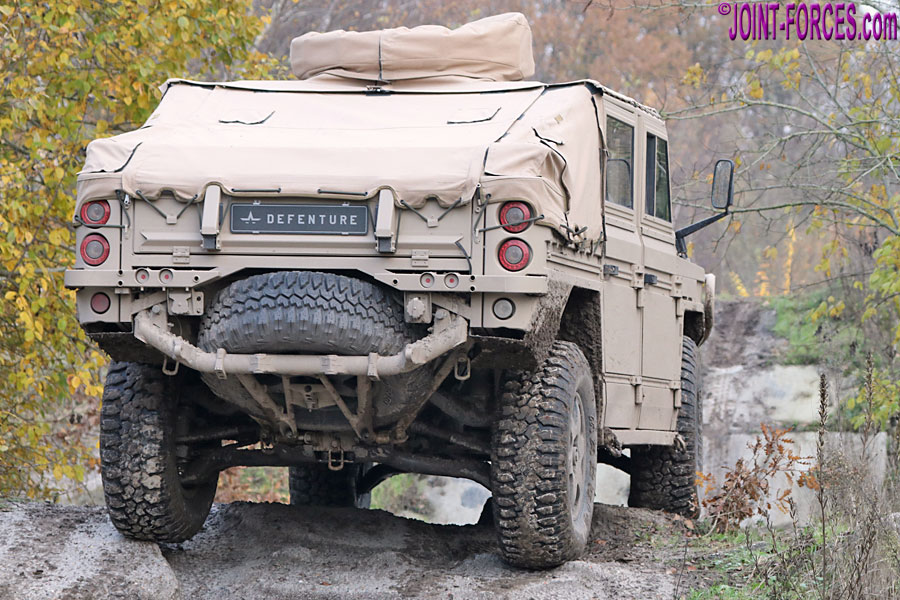 In this second part of the Defenture ATTV Story we take a closer look at the Dutch company’s signature Air Transportable Tactical Vehicle, writes Bob Morrison.

The Defenture GRF 5.12 ATTV or Air Transportable Tactical Vehicle, in service with Dutch Special Operations Forces (both Korps Commandotroepen or KCT and MARSOF) as the VECTOR Terreinwagen SOF, is a 4.7 tonne GVW optionally armoured 4×4 which can carry a 1.4 tonne payload. Designed specifically to fit inside a CH-47 Chinook transport helicopter, or be underslung from it, the vehicle fits an operational envelope of 5100 x 1800 x 1870mm high (to top of folded ring mount).

A replacement for the Serval variant of the Mercedes-Benz Geländewagen, the Defenture GRF (Groundforce) VECTOR was selected by the Dutch MoD in July 2013 to produce 50 vehicles and prototypes were quickly submitted for extensive trials prior to bulk delivery subsequently commencing in late 2017. In mid-2018 the order was increased to 75 and by mid-2020 all were in service.

Based on a stainless steel box section central spine chassis principle or CSCP construction, with corrosion resistant bodywork, VECTOR is powered by a 3.2-litre 6-cylinder Steyr multi-fuel diesel engine through a 6-speed ZF automatic transmission with 2-speed transfer case. Drive is permanent 4×4, and both front and rear differentials are lockable. Maximum power is 160kW, maximum torque is 500Nm and operational road range is quoted as being 800km on 115 litres of fuel.

On the off-road ability side, approach and departure angles are 46.5° and 43.5° respectively and ground clearance is 340mm. Designer Gerard Rond told us that from the very outset, based on his off-road rally raid experience, he created the GRF to have the widest track and greatest wheelbase possible while still remaining within the permissible envelope for air-transportation inside a CH-47. To ensure the best turning circle possible he also decided on selectable four-wheel steering from the outset and as a result the radius can be decreased to just 9.2 metres when travelling at low to moderate speed. Incidentally, although the front and rear suspension assemblies are not quite identical the parts are fully interchangeable allowing SOF mechanics to cannibalise and repair in the field in a way not possible on the vast majority of light and medium military vehicles.

The Defenture team, most of who hail from the motorsport sector with some also having prior military service, were keen to stress that the GRF / VECTOR is a ‘clean sheet’ design tailored specifically to military requirements, rather than being a conversion of an agricultural utility vehicle or a ‘supermarket and school run’ occasional off-roader more suited to farm tracks and the occasional foray onto grass. As a result not only is the vehicle able to operate in the -32°C (optionally -40°C) through to +49°C temperature range, but it is fully EMC (electromagnetic compatibility) proven meaning vital operational communications will not be degraded. Additionally, as the designers know that the actual payload carried by military vehicles on operations inevitably increases until every available space and surface that kit can be stacked upon is used up, spare load capacity was allowed for from the very beginning. As a result, modular ballistic protection up to STANAG Level 1 is an option and GRF / VECTOR was designed to allow this to be speedily and unobtrusively fitted using a cassette system.

Those vehicles we were able to photograph on our recent visit to the Netherlands were not fitted with weapons, though either a 12.7mm / .50cal heavy machine gun or 40mm H&K grenade launcher can be fitted in the ring mount plus a 7.62mm FN MAG medium machine gun can be pintle mounted in front of the commander. A bank of five smoke grenade launchers can also be fitted at the front.

In 2019 the German Bundeswehr’s BAAINBw announced a requirement for up to 80 AGF2 and UFK all-terrain and all-wheel drive vehicles for the KSK and on 30th July 2021 Defenture BV was appointed main contractor with serial delivery expected in 2024. We plan to take a brief look at this contract and at the Defenture MAMMOTH variant in Part Three.