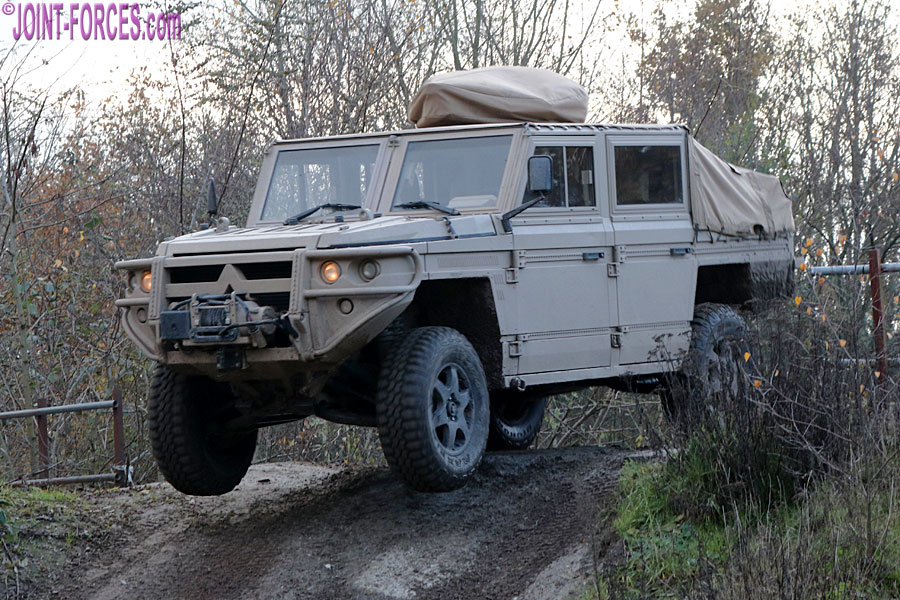 Defenture GRF ATTV (aka VECTOR) with Gerard Rond at the wheel on the company test track, December 2022 [© Bob Morrison]

The Defenture story started a little over ten years ago when founder Gerard Rond, a Dutch Rally Raid multiple champion and four time competitor in the Paris-Dakar, was in conversation with a high-ranking military officer who told him their Special Forces were undertaking missions in conflict zones with a vehicle not originally designed for the tasks and conditions.

The general said “Our soldiers, doing the most dangerous work, deserve the best gear to do their job.” This set Gerard thinking and he responded: “Give me the order and I promise they will get a vehicle that exceeds all expectations”. Working with friends on the rally and motorsport scene, in 2013 Gerard presented an innovative high performance modular 4×4 platform with 4-wheel steering which was not only capable of fitting inside a CH-47 Chinook helicopter and could carry in excess of 1.4 tonnes of payload but also had an operational range of 800km… and it offers ballistic protection too, by using a speedily mounted cassette armour system when needed. The Defenture GRF 5.12 ATTV is known by Dutch Special Forces as the VECTOR.

Defenture is not, however, a ‘one trick pony’ as in addition to already producing 75 VECTORS for the Dutch KCT (Korps Commandotroepen) and Dutch Marines SOF, plus eight more for Switzerland’s Special Forces, the company has a contract with the Netherlands Ministry of Defence for 275 SCORPION 6.6 4×4 military quads. They also have a contract to produce up to 80 of the MAMMOTH, a larger variant of the VECTOR, for the German Armed Forces, but precise details of this vehicle are under wraps with only a company graphic able to be displayed at present. And that is just the projects they are able to talk about for the moment. They also have hybrid and unmanned projects in development.

Carl Schulze and myself, along with our colleague Gerard Van Oosbree from Dutch Defence Press and four other specialist military journalists from Germany, were last week invited to visit the recently expanded Defenture factory in Tiel for a morning of briefings before moving to Gerard Rond’s near 8km long off-road test track where highly realistic KCT driver training is often undertaken. As several well-used customer VECTORS were back in the original assembly bays for scheduled deep maintenance, and as other sensitive work was being undertaken in the new 1,000 square metre production building, we were limited in the amount of internal photography we could take, but there was a Swiss ATTV outside for us to photograph and down at the test track we not only had a VECTOR to play with in the mud until it became too dark for photography, but there was also a Dutch SF vehicle on hand for static shots.

Throughout the course of the day we gleaned so much information that this feature will need to run to several parts, so before I head off for my next assignment here are some pictures of early VECTOR appearances and a couple of company graphics. I plan to continue with the Defenture ATTV Story on my return.