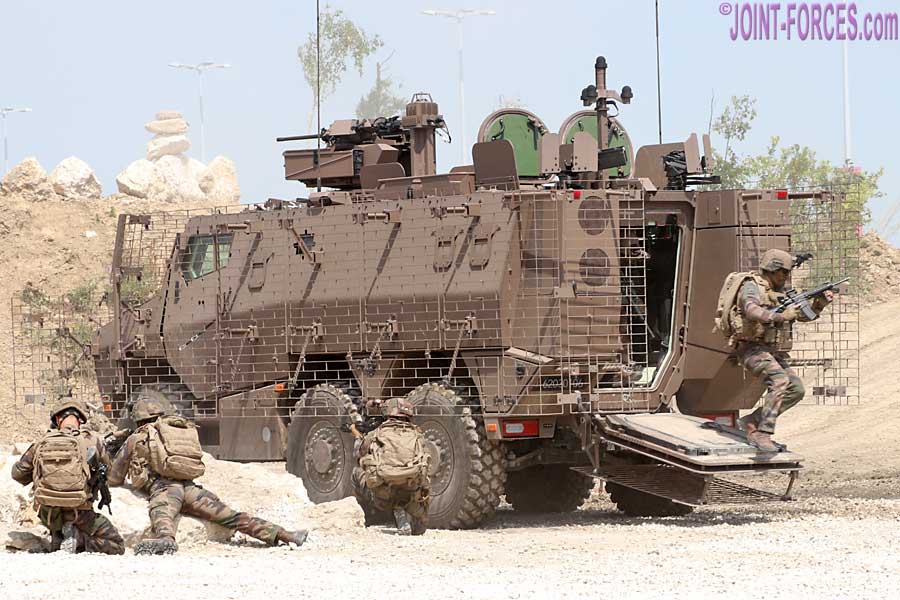 We already had an opportunity to photograph France’s new 6×6 VBMR GRIFFON armoured personnel carrier in the field a few months back during BRILLIANT JUMP 2022 ~ see French VBMR GRIFFON 6×6 In Norway for more detail ~ but as the vehicles deployed on that multinational exercise were not only in basic configuration but were also draped with camo nets we were glad to get a second bite at the cherry at Eurosatory 2022.

Four GRIFFON APCs participated in the display, two basic configuration command post vehicles designated GRIFFON EPC and two standard GRIFFON VTT (Véhicule de Transport de Troupes) personnel carriers fitted with appliqué armour and anti-RPG cages bringing them up to what the British would call TES or Theatre Entry Standard. This was our first opportunity to photograph GRIFFON with both the spaced armour appliqué package and the bar armour cage which together bring the vehicle up to STANAG 4569 Level 4.

In addition to the four vehicles which took part in the dynamic display, there was a fifth GRIFFON displayed by NEXTER on their outdoor stand. This vehicle was presented in basic configuration, as is evident from the protruding vision blocks in the front doors and in the crew compartment sides above the middle wheel station. The two Command Posts, which were static at the start of the display but then moved off before the Paras (with their UNAC RIDER Fardier ATVs) and the Infantry arrived on the scene as the scenario unfolded, were also exhibited in basic configuration.

As we have already covered the basic details of the GRIFFON in the previously mentioned article on the Norwegian deployment I won’t bore you by repeating the stats and I will let the pictures do the talking. Security was very tight on the NEXTER stand and even though I had a company-issued pass which allowed me to photograph on the stand the civvy security guards posted with each vehicle ensured that, with the exception of the driver’s station, no internal shots could be captured. However a sanitised press release photo of the interior of the EPC (Command Post) variant was issued in November 2020 and I have included this for those who are interested.

One final tiny point of clarification, the new vehicle is sometimes described as the EBMR GRIFFON and sometimes as the VBMR GRIFFON. EBMR (Engins Blindés Multi-Rôles) is the consortium (Nexter, Arquus and Thales) which builds the VBMR (Véhicule Blindé Multi-Rôles). How would the military function without their acronyms?