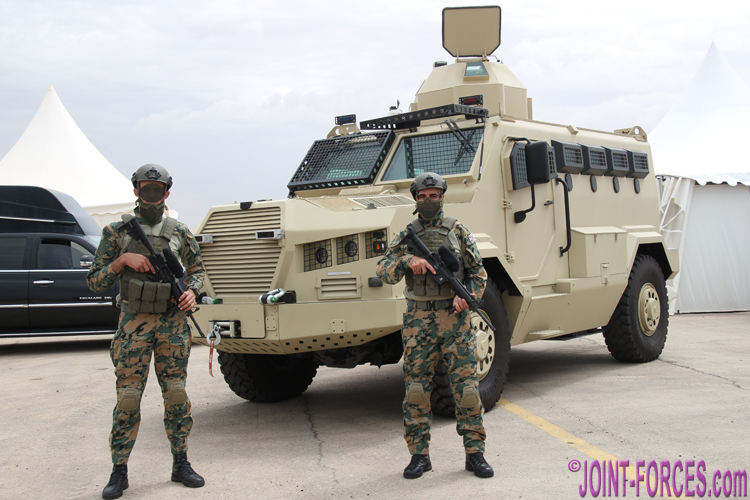 First unveiled in prototype form at SOXEX 2016, several production examples of Jordan’s Al-Wahsh 4×4 Protected Patrol Vehicle were on display at the SOFEX 2018 defence expo in Amman this May.

Built on a TATRA heavy duty 4×4 cross-country truck chassis, Al-Wahsh (literal translation, The Monster) is crewed by two and can transport up to eight troops or gendarmerie in the rear under STANAG 4569 KE Level 2 protection.

Weighing around 18 tonnes, the vehicle is capable of 110km/hr (c.69mph) on-road and its advanced independent suspension system and 380mm ground clearance give it very capable off-road performance. Its diesel engine is said to produce 370hp and automatic six-speed transmission is fitted.

Basic dimension supplied by KADDB, the design authority, are 5800mm long x 2500mm wide x 2530mm high to top of hull. Either a KADDB Snakehead cupola, mounting one or two 7.62mm machine guns, or a Remote Weapon Station mounting a machine gun or cannon up to 30mm calibre, can be fitted behind the cab.

An artillery variant of Al-Wahsh, mounting a 105mm howitzer, has also been displayed at SOFEX (the Special Operations Forces Expo) in both 2016 and 2018.