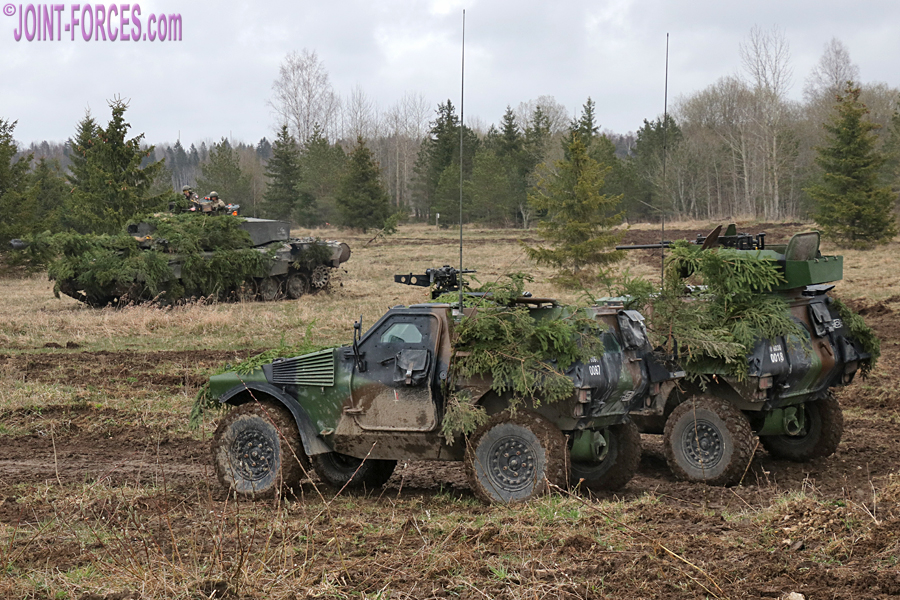 A brace of French VBLs deployed on Operation LYNX 9 in Estonia working alongside a British Challenger 2 MBT during interoperability training, May 2021 [©BM]

This small album of French wheeled vehicles in Estonia has been produced to accompany Part Three of Spring Storm In The Baltic Region, writes Bob Morrison.

The French Ministry of Defence has a long tradition of supplying homegrown equipment and vehicles for their Armed Forces, rather than buying-in foreign designs, but although France’s defence equipment manufacturers export to a wide range of countries around the globe it is actually quite unusual to see French-designed vehicles serving with the armies of the other NATO allies. As the French contingent currently serving with the British-led NATO eFP (enhanced Forward Presence) Battle Group in Estonia under Op LYNX 9 is fielding a fleet of small VBL, PVP and VAB 4×4 light armoured vehicles, which are all likely to be replaced in the not to distant future by either upgraded VBL Ultima variants or the latest generation VBMR Griffon 6×6 or VBMR-L Serval 4×4 multi-role armoured vehicles, producing this small album seemed like a good idea.

Before focusing on the armoured 4x4s it probably makes sense to briefly look at the Peugeot P4 (later Panhard P4) upon which the VBL was based. To meet 1960s military requirements and then designed in the 1970s as part a joint Franco-German cooperative programme after the ‘EuropaJeep’ programme with the Italians foundered, the P4 was essentially the French version of the Austrian SDP (Steyr-Daimler-Puch) design which the West German military subsequently procured with Mercedes-Benz badging as the Geländewagen; also known as the G-wagen and today as the G-class. To meet the French MoD requirement the three home nation car manufacturers Citroen, Peugeot and Renault all proposed cooperative ventures (with Volkswagen, Mercedes-Benz and FIAT respectively) but it was the Peugeot proposal than eventually won the early 1980s contract to supply up to 15,000 of the Véhicule de Liaison Tout-Terrain (VLTT) or All-Terrain Liaison Vehicle.

As part of the original Peugeot P4 programme, of which 50% of the finished product had to be French, a slightly different and more Jeep-like lower body tub was developed, with fabric rather than metal doors as on the G-wagen, and a Peugeot engine and drive train was fitted. The original design was a success, with 13,500 examples being produced under the original French contract. Initially both XN8 petrol and XD3 diesel Peugeot engines were fitted, but when NATO adopted an all-diesel fuel policy in the 1990s the petrol P4 fleet was converted to diesel. With the earliest P4 vehicles now over 30 years old, in the middle of the last decade the French MoD ordered an interim batch of locally converted Japanese SUVs as the T4 VLTP NP while the much larger batch of Arquus VT4 Ford Everest conversions was under procurement to replace the P4.

The Panhard VBL (Véhicule Blindé Léger or Light Armoured Vehicle) could be described as the French equivalent of the Armoured Land Rover, but built on Peugeot P4 running gear. Entering service service in the mid-1980s the VBL, which beat a Renault competitor in French Army trials, is essentially a Scout Car used for reconnaissance, liaison, close support and escort duties rather than troop transport and it is unusual to see French armoured or mechanised forces deployed without at least a few of these scurrying around.

As I have already penned a feature on the VBL, including photos of vehicles spotted on the original Operation LYNX deployment in 2017, I don’t intend going over old ground here. Those VBLs which I spotted this May, both during interoperability training with 1st Battalion of the Mercian Regiment and later on the Tapa Polygon during KEVADTORM 21, were either VB2L versions with a 7.62mm machine gun mount for self-defence or VBL RECO variants with 12.7mm heavy machine gun turrets, and all examples I spotted were working in mixed pairs. The French are currently supporting the UK-led NATO eFP Battle Group Estonia (BG EST) for twelve months, with personnel rotating midway through, and next March they should hand over to the Danes to allow them to support one of the other two multinational battlegroups helping support the Baltic Nations. Assuming the commitment is renewed, it is likely the French Contingent will take the upgraded VBL Ultima with them next time they deploy to Estonia.

The compact and angular VBL, which usually has a crew of just two or three, is not large enough to be used to transport small specialist squads of troops or cargo so the boxy Panhard PVP (Petit Véhicule Protégé or Small Protected Vehicle) is used instead. A derivative of the Auverland A4 rather than the Peugeot P4, it is slightly longer, wider and higher than the VBL and has a GVW weight about 800kg higher meaning it can carry around one tonne of cargo if the two rear seats are folded and it is also large enough to be used in a command & communications ROLE. The wide rear door makes loading and unloading of cargo much easier, and if troops are travelling in the rear they have vision blocks and firing ports in both sides and the rear door for self-defence. Like the VBL, the PVP only offers STANAG Level 1 protection against standard NATO 7.62mm and 5.56mm ammunition and grenade fragments so is not intended for frontline use in high intensity combat zones.

At this point it is possibly worth mentioning for those who are unaware of the evolution of French military vehicle manufacturing that the Panhard, Peugeot, Renault and Auverland brands all now fall under the Arquus name following mergers and a 2018 rebranding of Renault Trucks Defense. That, however, is another story which we intend to cover once we have the chance to visit the recently inaugurated Arquus Heritage Conservatory in Garchizy.

The last 4×4 deployed by the French Contingent in Estonia is the VAB (Véhicule de l’Avant Blindé which roughly translates as Armoured Vanguard Vehicle). Originally manufactured by Renault from the mid-1970s and still offered for export by Arquus, in 6×6 version as the VAB Mk3, this 14-tonne armoured personnel carrier can carry up to ten troops in addition to its crew of two. Widely operationally deployed over the last four decades, but soon to be replaced by the VBMR-L Serval, the VAB has a road range in excess of 1,000km and at top speed of over 100km/hr but is also highly capable off-road. The examples we spotted in Estonia were Armoured Engineer variants; the infantry supporting the Leclerc main battle tanks were using the much 8×8 VBCI, but we were unable to photograph these on this assignment as they were advancing down a parallel axis from the UK contingent.

Back on the main theme, for the next part of Spring Storm In The Baltic Region I plan to focus on the Joint Forcible Entry phase by American and British airborne troops.