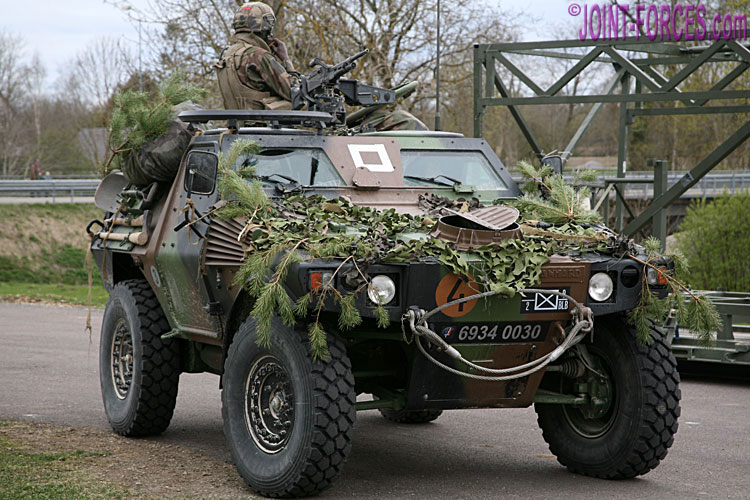 In 1978 the French Army General Staff, l’État-Major de l’Armée de Terre or EMAT, issued a requirement for a small armoured reconnaissance and liaison vehicle intended primarily to accompany their wheeled armoured formations and six years later, on 15th February 1984, the VBL offered by Panhard was chosen over a Renault competitor.

Today, after much merging of French vehicle brands, both Renault and Panhard are part of ARQUUS and the VBL has been out of production for a decade, but the nimble little armoured 4×4 is still operationally deployed by the French Army from NATO’s border with Russia and Belarus to sub-Saharan Africa. The British wheeled equivalent of the VBL was the Daimler Ferret Mk2, which last served operationally until the 1991 Gulf War, and its tracked equivalent was, and is, the CVR(T) Scimitar; for a brief period over the last two decades the UK has used the larger and heavier, though better protected, Panther CLV (Iveco LMV or VTML Lince) as a wheeled light armoured liaison vehicle, but two years ago the bean-counters inexplicably put this fleet up for sale before any replacement had even been ordered.

This company promotional blurb for the French vehicle sums it up quite neatly: “The VBL is a wheeled, amphibious, armoured vehicle with great mobility, and was designed for reconnaissance and infiltration missions. Its design followed the rule of three: 3 tonnes, 3 metres long, 3 crew, space divided into 3 (2/3 for the cab and 1/3 for the engine), 3 doors and 3 hatches on the roof.”

Effectively an armour-protected version of the Peugeot, later Panhard, P4 VLTT (Véhicule Léger Tout-Terrain or Light All-Terrain Vehicle) which is the French equivalent of the Geländewagen or Land Rover, the VBL is airportable inside C-160 Transall or C-130 Hercules transport aircraft and it can also be inserted by parachute by both. Additionally it is amphibious, with a small shrouded propeller allowing it to cross rivers and lakes at a theoretical 4.5km/hr, and positive pressurisation of the hull when all hatches are sealed means it offers the crew NBC (Nuclear, Biological and Chemical) protection.

For the technically minded, the basic VBL measures 3800x2020x1700mm to top of hull roof (2140mm to top of machine gun, when fitted) and has a kerb weight of 3250kg; payload for crew, kit and armament is 750kg. The later VB2L version is 200mm longer, with a slightly modified rear body, but is otherwise dimensionally similar and has the same payload. Armour protection, against 7.62mm rounds and shrapnel, is STANAG Level 1 and steel thickness varies from 5mm to 11mm.

The VBL and VB2L are powered by the 2498cc Peugeot XD3T in-line four-cylinder turbocharged diesel engine which develops 95hp and give it a maximum top speed of 90km/hr or 56mph, though an average of 70km/hr or 44mph is more realistic. As the VBL was originally primarily deployed alongside the Panhard ERC or GIAT AMX-10RC wheeled gun-armed armoured cars, and occasionally with the Leclerc Main Battle Tank, these seemingly quite low road speeds have actually not an issue, though as France introduces its new family of armoured vehicles 800 of the fleet are undergoing refurbishment under the VBL Ultima programme.

Externally the original VBL and the slightly longer VB2L are quite similar and very distinctive, especially if covered in scrim nets or natural foliage, but if one looks at the lower hull edge just behind the front doors the amount length of bodywork between the door edge and the lashing eye just in front of the rear wheel cut-out is the identifier. Additionally, though this is not always visible if the vehicle is camouflage, the upper bodywork of the VBL is more slopping behind the front doors with a triangular fillet marking the transition, whereas the VB2L has a plain upper rear side panel.

As of June 2019 the French MoD had a VBL and VB2L fleet numbering 1446, in several variants, on strength but this total was not further broken down. Approximately 900 of the original VBL model, plus 15 prototypes, were ordered in two batches and 700 of the slightly stretched VB2L were ordered around 2003/4. Several other nations, mainly in Africa and the Middle East, have procured the VBL but Greece and Portugal are the only two other NATO nations to have bought this compact little recce vehicle. However these are mostly outside the scope of this article, which concentrates on vehicles in French service. Several armed variants, toting anti-armour launchers rather than a machine gun or automatic grenade launcher, have been produced but these are also beyond the scope of this article.

At present ARQUUS is refurbishing 800 of the existing French Army VBL/VB2L fleet to bring them up to VBL Ultima standard. A manufacturer’s spokesperson has told us: “ All Ultima vehicles are refurbished: everything is repaired, upgraded and integrated. Technically, it is vehicle reconstruction and upgrade, not production of new vehicles. However, all hulls are reworked in our plant in Garchizy so they are good as new when integrated in the Marolles plant.” We understand the first four of the new VBL Ultima model should be delivered by next moth (June) and at least 50 should be delivered by the end of 2020.