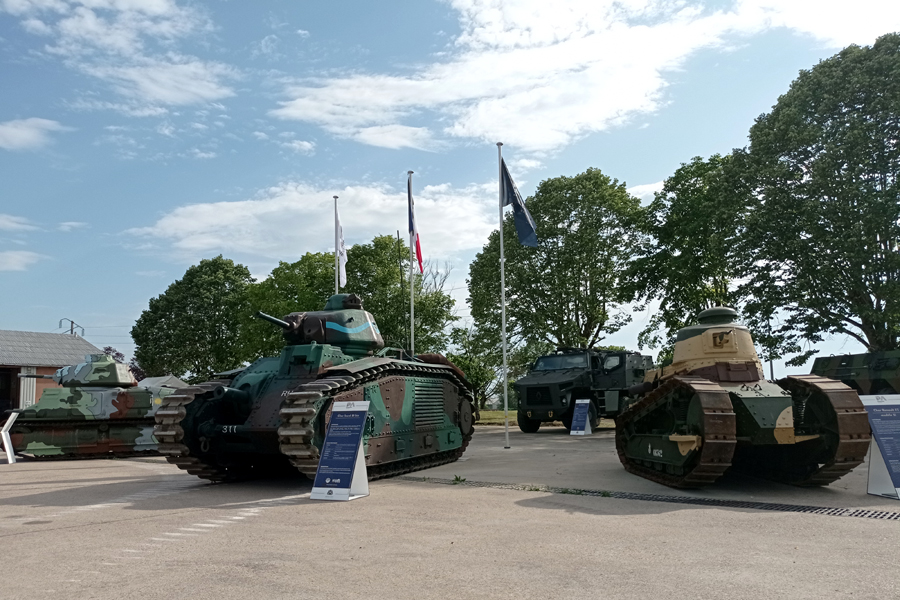 The Arquus Heritage Conservatory was inaugurated yesterday ~ we were invited to the event but travel restrictions prevented our attendance.

I am pleased to welcome you this 17th June in Garchizy for the inauguration of the ARQUUS Heritage Conservatory, the fruit of a long-standing reflection. It started with numerous editions of books or documents on line on the ARQUUS website. Among them, an online ephemeris, then two volumes of our brochures entitled Brèves d’Histoire, a book, ARQUUS, Un Siècle d’Innovation et d’Engagement in 2018 on the occasion of the inaugural evening of ARQUUS, and more recently a set of two comic strips entitled La Chevauchée d’ARQUUS (The Ride of ARQUUS), highlighting its prestigious roots.

It is now continuing with a more ambitious project, the Heritage Conservatory. Taking advantage of the presence in our own factories of products, sold or not, at the stage of prototypes, test vehicles or products presented to the French or foreign Armies, we considered it essential to keep this memory of the work of all our teams, engineers as well as operators and workshop managers. We have extended this first approach thanks, in particular, to donations or loans from partners who are extremely valuable in helping us to win this challenge.

The Délégation au Patrimoine de l’Armée de Terre (French Army Heritage Delegation) guaranteed us a substantial presence of post-World War II vehicles, such as the EBR or the AML, which highlight the ‘ combat reconnaissance’ DNA of ARQUUS vehicles, through its Panhard lineage. It has lent us, for the time of this exhibition, four jewels of its collection from the Musée des Blindés de Saumur, which underlines the diversity of our origins, Renault, Latil, Somua and many others. You will see them in the middle of the parade ground of the aptly named Trois Glorieuses. As for the Berliet Foundation, historical partner, it graces us for this day of exhibition with two mythical machines of the brand: the CBA of 1916, a truck of the First World War and the Sacred Way, and the GBC 8KT, born in 1964, dear to the army which saw it transporting its contingents as well as its professional units, in OPEX as well as on the National Territory, during more than fifty years.

The Renault History Association, for its part, has made available to us a documentary exhibition on the resilience of the Renault factories during the First World War. Mrs. Legueu has donated her husband’s collection, which is on display in the eponymous hall. These vehicles are the result of the hard work of Paul Legueu, founder of ACMAT, as you can see on the binders dedicated to some of these vehicles. In addition, Mr Fortin, a private collector, came from Montpellier, by road, to complete the Legueu collection by providing a magnificent vehicle in the colours of the French Foreign Legion. Finally, the companies MBDA and John Cockerill have respectively made available to the conservatory a MISTRAL anti-aircraft turret and the CRAB turret. I would like to thank all these partners, volunteers, for their support. Without them, nothing would be possible…

The year 2021 was devoted to the start-up of the project as it is presented today. The future will be devoted to the educational process that must precede the hoped-for opening to the public in 2023, to the search for older vehicles and to the creation of heritage associations on each of our sites.