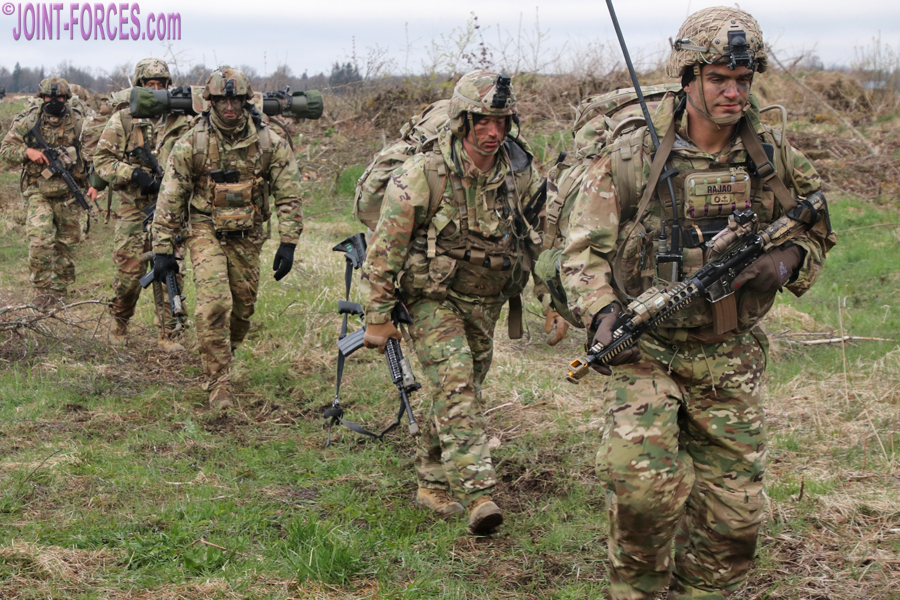 Background: SWIFT RESPONSE 2021 was a US-led multinational exercise held near simultaneously across several countries and linked into the DEFENDER-Europe 2021 deployment of troops from CONUS (Continental United States) into a number of European countries to demonstrate the US and NATO Alliance commitment and ability to rapidly reinforce in times of crisis; SWIFT RESPONSE activities in Europe commenced in Estonia in early May with a Joint Forcible Entry just ahead of the national KEVADTORM / SWIFT STORM field exercises, which also included troops and equipment dedicated to the NATO eFP (enhanced Forward Presence) mission in the Baltic Region.

Peacetime safety regulations and a bout of unusually inclement weather for early May, with extremely high winds and very heavy rain, forced the main parachute drop onto Nurmsi Drop Zone, about 60km from the Estonian Central Training Area near Tapa, to be postponed by more than 24 hours. However in the early hours of Saturday 8th May, a combined force of paratroopers from the US 82nd Airborne Division and the UK 16th Air Assault Brigade flew across the Atlantic from North Carolina, including refuelling in the air, to drop into Estonia under cover of darkness.

Over the last 30 plus years I have photographed British Paras jumping into action a good many times (including back in those distant days when not only was a 15-ship RAF Hercules mission to drop a full Lead Parachute Battalion Group a regular occurrence, but UK MoD was happy to allow specialist defence journalists to fly in the aircraft or stand alongside the DZ Safety Officer on the Alpha) and I have also covered American Paras on mass drops, both at Fort Bragg and in Europe, for over a quarter of a century. I therefore reckon I have a reasonable understanding of the procedures and can usually tell from the met forecast when there is a good chance that the Paras will be jumping from aircraft, rather than air-landing some distance away and being conveyed to the drop zone in trucks or on coaches; in the old days nicknamed a ‘Wallace Arnold Insertion’ by 5 [UK] Airborne Brigade.

By the Friday evening it looked likely that the rescheduled drop would now go in around 02:00 (local) on Saturday, at a time when photography would be extremely challenging at best; I had, of course, undertaken a daylight recce of the DZ well in advance and had managed to identify both where the VIP party and the media would be corralled to ensure we weren’t beneath the planned heavy drop and where the Military Police safety cordon around the airfield would be set up. Late in the evening, after liaising with our air movements specialist back in the UK (i.e. my specialist aviation and communications journalist mate Pat Carty) and having tracked in real-time the US Air Force C-17 heavy transport aircraft fleet as it crossed the Atlantic heading for the most easterly of NATO drop zones in Northern Europe, I took an executive decision and hit the sack, reckoning there was no point in me standing around like Del Boy’s kid brother Rodney in the dark on a cold and damp night while the Paras dropped a mile of more from the media box in total darkness. Tomorrow, I also reckoned, was likely to be a very long day so I put myself on duvet duties.

As expected, during the hours of darkness around 500 US Paras, mostly from 508 PIR but with specialists including engineers and gunners attached, plus almost 100 UK Paras, mostly from 2 PARA, descended onto a very soggy Nurmsi Drop Zone and as a result of the ground being wet and soft the casualty rate and associated injuries were low. The site at Nurmsi is a roughly 2,500m long Cold War era Soviet grass airstrip running NW-SE which has not been developed or re-forested, though there is forest to the NE which defending Estonian ‘OpFor’ insurgents on the exercise had used to good effect, so the location was pretty much ideal for a Joint Forcible Entry exercise. Once the Paras had seized and secured the Nurmsi airfield, its size and reasonably remote distance from the main exercise area at Tapa meant it was highly suited for a follow-on air assault to be launched the next evening.

Shortly after first light on the Saturday morning I checked in with the Military Police cordon at Nurmsi and then made my way round to the NE side of the airfield where the Paras were regrouping prior to tabbing off into the forest to mop up any surviving OpFor. However as a joint American and British MLRS (Multiple Launch Rocket System) battery deployed on FIRES SHOCK 21 had notionally pulverised the OpFor positions (they actually engaged trench positions on the Central Training Area) ahead of the originally scheduled P Hour a pitched battle was averted. While the Paras tabbed into the forest, a gun line equipped with both 105mm and 155mm artillery, separately delivered with vehicles to the Airborne Gunners on five heavy drop platforms from C-17 Globemasters, was established at the side of the DZ to provide covering fires.

While the Paras were off mopping up any Yellow Forces remnants ~ a bad knee injury suffered a couple of weeks before I deployed to Estonia for the month limited my mobility and prevented me following them through the forest on on foot ~ I spent my time around the DZ taking library photos of guns, rations and equipment until the helicopters started arriving for the follow-on air assault. It is my intention to cover the helo phase in the next feature in this series.