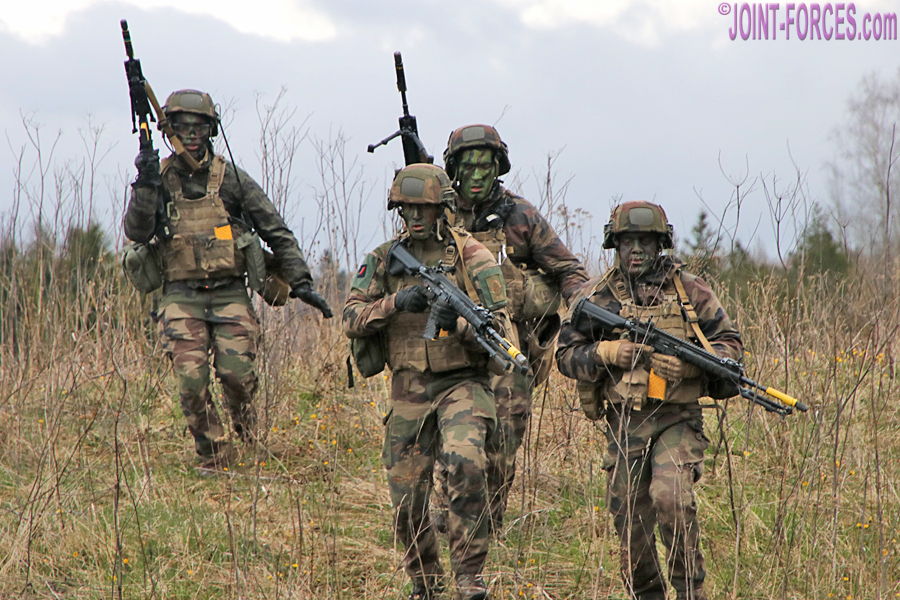 In Part Three of Spring Storm In The Baltic Region our focus falls on France’s LYNX 9 contingent and on UK-French interoperability training, reports Bob Morrison.

In the run-up to the FTX (field training exercise) phase of KEVADTORM 2021 (SPRING STORM 2021) the troops were practising platoon-level interoperability drills on the perimeter of an abandoned former Cold War Era airfield with some of the combat engineers from the French contingent acting as OpFor militia. We watched from one of the objectives as a platoon of French infantry using Mercian Regiment Warrior infantry fighting vehicles and supported by Royal Tank Regiment Challenger 2 main battle tanks plus French VBL scout cars assaulted and overran the position.

That day the Deputy Chief of Operations of the Military Staff (SCOPS) of the French Armed Forces, General Stéphane Mille, who was in Tallinn for the Military European Strategic Talks of the European Intervention Initiative, managed to slot in a flying visit to his troops deployed to Tapa on the eFP mission. For the general’s benefit a demonstration of British and French logistics interoperability was also laid on, which we were invited to watch, but interesting as that would have been I opted instead to head out (having of course first sought permission from the French officer in charge of safety) to some of the ruins being defended by the French sappers as this would allow me to be much closer to the action than the overview position from where the four-star would be watching the big picture.

The French contingent currently deployed in support of the UK-led NATO eFP Battle Group Estonia [BG EST] is roughly three hundred strong and deployed for one year; the participating troops, however, are on two six month roulements. A Danish Army contingent alternates with the French, who are currently on their third BG EST deployment, and a little later during KEVADTORM 2021 we had the chance to work with their Jutland Dragoons whose equipment had arrived by sea to temporarily reinforce the easternmost Baltic battlegroup for the duration of the exercise.

The current French SGTIA (Sous-Groupement Tactique InterArmes or All-Arms Tactical Sub-Group) on the LYNX 9 mission is roughly 200-strong and primarily comprises: two platoons of Leclerc main battle tanks and a reconnaissance platoon from the 12e Régiment de Cuirassiers; an infantry platoon from the Régiment de Marche du Tchad, with VBCI 8×8 armoured infantry vehicles; a combat engineer platoon from the 13e Régiment du Génie, with an engineer variant of the VAB 4×4 armoured personnel carrier; and a fires observation and coordination team from 40e Régiment d’Artillerie; All units are drawn from the 2nd Armoured Brigade or 2e Brigade Blindée. There is also a Headquarters element and a National Support Element, with logistics and military police units, which brings the total French contribution to BG EST up to around 300 personnel.

Back to the little picture: Training as a ‘mix & match’ formation down at platoon level, with French infantry being transported in British fighting vehicles with British tanks in support and French light armoured vehicles covering their flanks, both improves communications between allied units down at the sharp end and gives the troops and senior NCOs a better understanding of how their allies operate. In simple terms, it breaks down potential national barriers and builds a more effective team down at the frontline; interestingly, just as it was in the old days of the multinational ACE Mobile Force exercises during the Cold War, football still seems to be the primary topic which unites troops of different nationalities and gets them talking to each other.

In due course the French eFP contingent will be re-equipped with the new VBMR Griffon 6×6 in place of the VBCI and the VBMR-L Serval 4×4 in place of the VAB, and the smaller VBL 4×4 will be replaced by the upgraded VBL Ultima version, but that is still a little way down the line. However infantry personnel currently serving in Estonia, plus some of the combat engineers too, are now armed with the new 5.56mm HK416F assault rifle, which is replacing the distinctive bullpup design FAMAS F1.

For Part Four of Spring Storm In The Baltic Region the action will move to Nurmsi Drop Zone, if all goes to plan.