DEF20 Plus and ALLIED SPIRIT ~ Breach and Cross 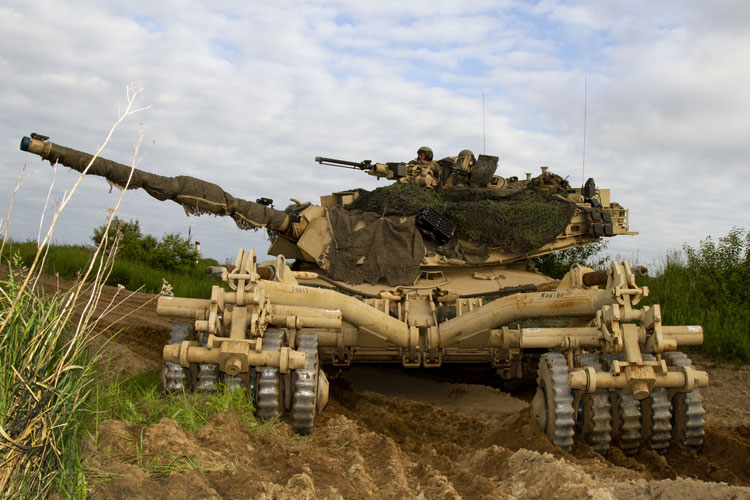 An M1 Abrams MBT with mine roller, from 2 ABCT of 3 ID, takes a defensive position on Drawsko Pomorskie Training Area [US Army: Sgt Evan Ruchotzke]

Earlier this week Polish and US troops on the ALLIED SPIRIT phase of DEF20 Plus (DEFENDER-Europe 20 Plus) undertook breaching and river crossing training.

Tomorrow, Sunday 14th June, the past week’s combined interoperability training will culminate in a major crossing of the Drawa River on the Drawsko Pomorskie Training Area, over a Polish-assembled pontoon bridge, by an armoured contingent from the US 3rd Infantry Division who have deployed for the exercise from bases in Germany. Polish infantry from 12th Mechanised Brigade will support the Americans and additional Polish troops using MILES simulation equipment will provide the Opposing Forces or OpFor. [To gain maximum interoperability training benefit, a third crossing of the Drawa is also scheduled for next week.]

Regrettably travel restrictions have prevented us getting out to DPTA, which irritatingly this weekend is being bathed in warm sunshine, but hopefully these images and video clips – of trench filling and bund breaching on the approach to the river, an initial crossing to secure a bridgehead, and a rehearsal for the main crossing – will bring readers a flavour of the exercise. All were captured by US Army photographers mid-week.

Originally scheduled for May but postponed by COVID-19 and downsized, ALLIED SPIRIT is now scheduled to run until 19th June. All US soldiers and civilians personnel involved in the exercise completed a 14-day quarantine and were tested for COVID-19 upon arrival in Poland.