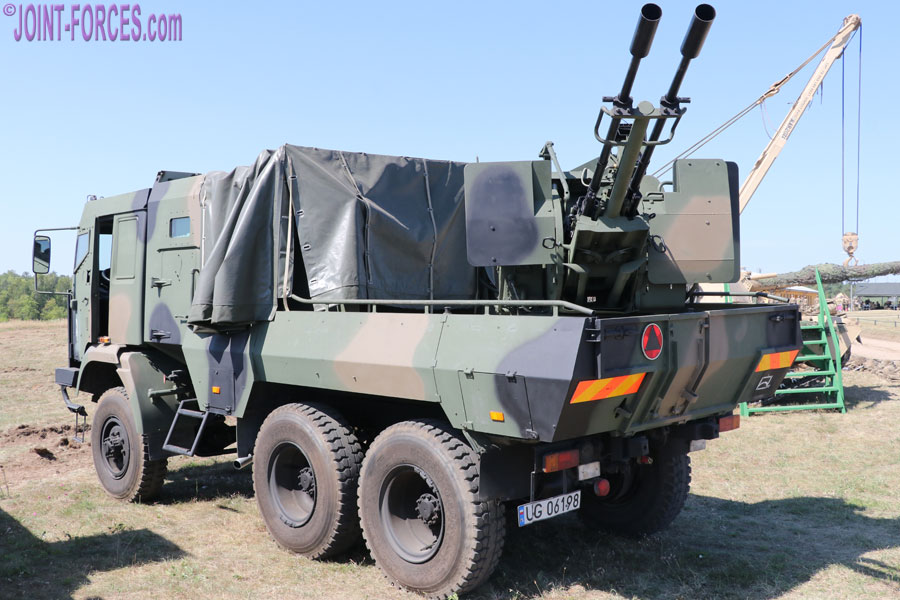 One of the 17 Mechanised Brigade HIBNERYT air-defence systems, which technically might better be described as a portee rather than a self-propelled system as the weapon can be demountable, appeared at the recent US-Polish combined arms live-fire exercise on the Drawsko Pomorskie Training Area.

This comparatively light and highly mobile system marries a twin-barrelled modernised ZU-23-2 anti-aircraft gun to an armoured Star 266M 6×6 truck to give a fast into action (anything between 5 and 20 seconds) close air defence system for primarily engaging low-flying helicopters; the system can also be used against lightly armoured ground targets.

The effective range of the electrically traversed and elevated twin 23mm ZU-23-2 cannons is given as 2500 metres and the practical rate of fire is stated by the Polish MoD as being 400 rounds per minute. Normal crew is four, transported in what is reportedly a STANAG Level 1 armoured cab, but the system can be operated by just two soldiers if necessary.

Although the basic ZU-23 automatic cannon was a Russian design, widely produced by Warsaw Pact nations and others, the Polish version licence-built by ZMT has been modernised quite extensively over the years. Towed twin-barrelled systems of the system upgraded with twin GROM air-defence missile launchers have been in Polish service for around three decades and the latest version of this automatic cannon variant can also be carried on HIBNERYT.

Although both HIBNERYT and POPRAD were displayed at DPTA last week, neither were fired in the air defence role as Bucierz Range is not used for surface-to-air live-fire exercises; on safety grounds these normally take place over the sea off the Baltic Coast near Ustka.