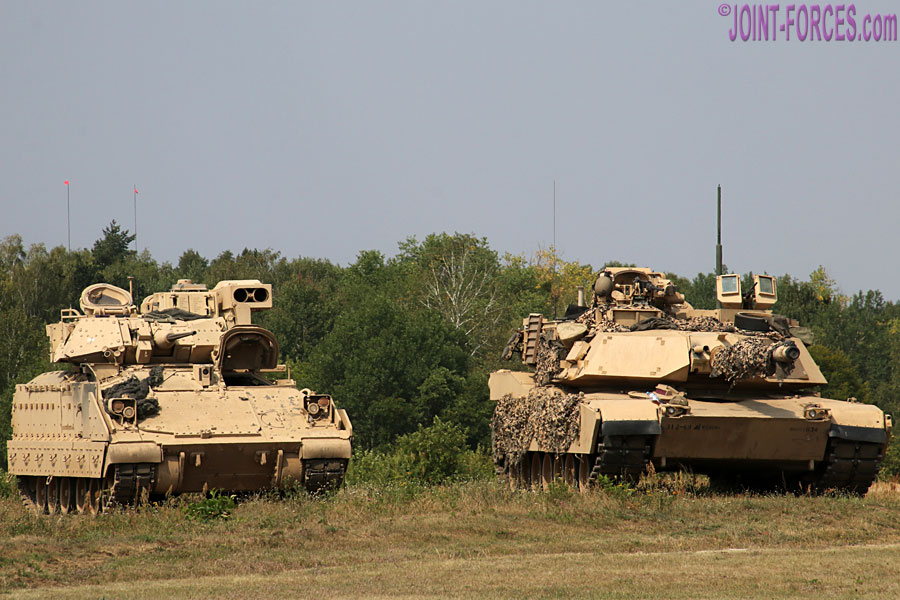 In April 2014, in direct response to the Russian Federation annexing the neighbouring Ukrainian territory of Crimea a few weeks before, the US Army in Europe (USAREUR) took the lead for the ATLANTIC RESOLVE mission and commenced bringing CONUS-based units (i.e. forces from the Continental United States) across the Atlantic for approximately nine month long roulements or rotations.

Three different types of Rotation – Logistics, Armoured (Armored in US parlance) and Aviation – are involved in the mission, currently overseen by HQ 1st Infantry Division (Forward) from a regionally aligned headquarters based in Poznan in Poland, and at any one time there are usually 6,000 soldiers participating. The ATLANTIC RESOLVE 6 deployments were incorporated into the massive DEFENDER-Europe 20 (DEF20) exercise, which when originally planned was intended to bring 20,000 troops to Europe early this year for a series of linked and multinational exercises, but the COVID-19 pandemic severely disrupted this process as troop movements temporarily ground to a halt and quarantine processes became necessary.

The 2nd Armored Brigade Combat Team (2ABCT) of the 3rd Infantry Division, home based at Fort Stewart in Georgia, was assigned as the sixth ATLANTIC RESOLVE armoured rotation and the bulk of their armoured vehicles started arriving in Europe in February courtesy of US Military Sealift vessels (see DEF20 ~ 2ABCT of 3ID Armour Deploys) with the troops flying in shortly after. The worldwide COVID outbreak seriously impacted DEF20 exercise plans but as restrictions eased 2ABCT gradually resumed bilateral, joint and multinational training events with allies in the ATLANTIC RESOLVE areas of operation, starting with ALLIED SPIRIT 20 at Drawsko Pomorskie Training Area (DPTA) in Poland in June.

When I visited DPTA earlier this month to watch the DEF20 Phase II ~ EDRE CALFEX At Bucierz Range, a Combined Arms Live Fire Exercise (CALFEX) involving a battalion from the US 1st Armored Brigade Combat Team ‘Ironhorse’ of the 1st Cavalry Division working alongside troops from Poland’s 17 Wielkopolska Brygada Zmechanizowana (17 Greater Poland Mechanised Brigade), part of 2ABCT from 3ID, mostly but not exclusively 2nd Battalion of 69th Armoured Regiment or 2-69A, was also still conducting training there. This gave us the opportunity to photograph how the Abrams tanks and Bradley fighting vehicles we last saw without weapons or accoutrements on Bremerhaven Docks looked when rigged for action.

According to the official ATLANTIC RESOLVE fact sheet and infographic, 2ABCT 3ID deployed with:-

The Abrams main battle tanks deployed with 2-69A of 2ABCT to Drawsko Pomorskie at the time of my visit were M1A1 SA (Situational Awareness) models which have a single second-generation Forward-Looking Infrared (FLIR) sight, analogue architecture and the Blue Force Tracker digital command-and-control system. Unlike the newer M1A2C – previously classified M1A2 SEP (V3) – tanks from Army Prepositioned Stocks in Europe used by 12th Cavalry Regiment ‘Thunder Horse’ on the EDRE and Combined Arms Live Fire Exercise seen on Bucierz Range in the previous feature, these sandy coloured tanks do not have CROWS (Common Remotely Operated Weapons Station) and it is not intended they should be fitted with Trophy APS or ARAT reactive armour as this tranche of the US MBT fleet is scheduled for replacement by the M1A2D model which is currently in development.

The infantry companion to the Abrams is the Bradley Fighting Vehicle System or BFVS but during manoeuvres on Bucierz Ranges Polish Mechanised Infantry riding in KTO Rosomak wheeled infantry fighting vehicles also operated alongside the 2 ABCT main battle tanks; I plan to look at the Polish armour in the third feature in this mini-series from Poland. Almost all of the US Bradley fleet, which used to consist of M2 Infantry and M3 Cavalry variants, is currently being upgraded or converted to a common M2A3 standard and it is therefore not easy to determine precisely which versions were fielded by 2ABCT; I suspect most were M2A2 ODS versions, but I admit to not being an expert in this particular field, and they were definitely not the latest M2A3 versions (identifiable by the Commander’s Independent Viewer at right turret rear) drawn from prepositioned stocks which we saw 2nd Battalion of the 12th Cavalry Regiment using on DPTA in the last feature.

After watching the start of the combined Polish-US CALFEX at DPTA on 11th August, Polish Minister of Defence Mariusz Błaszczak, escorted by Brigadier General Brett Sylvia of the US 1st Cavalry Division, visited a static display of 2ABCT and 17 Wielkopolska Brygada Zmechanizowana armour. While on a recce the previous day I was able to snap some of the American armour from this display and after the MinDef and his party departed I was able to grab a few more shots of the tanks as they dispersed; as a security precaution, the Minister’s close protection detail changed the plans for the media to spend time on the static display after the live fire so I was unable to spend quite as much time taking snaps as I would have liked to, but I think I managed to get most of what I needed.

The primary task of units on ATLANTIC RESOLVE rotational deployment is to conduct bilateral, joint and multinational training events across the Areas of Operation (AO) with allies and partners from 18 countries including: Belgium, Bulgaria, Czechia, Denmark, Estonia, Georgia, Germany, Greece, Hungary, Italy, Latvia, Lithuania, Netherlands, Norway, Poland, Romania, Slovakia and the UK. Their mission, according to USAREUR, is to “focus on strengthening bonds between allies and partners, increasing interoperability and building readiness.”