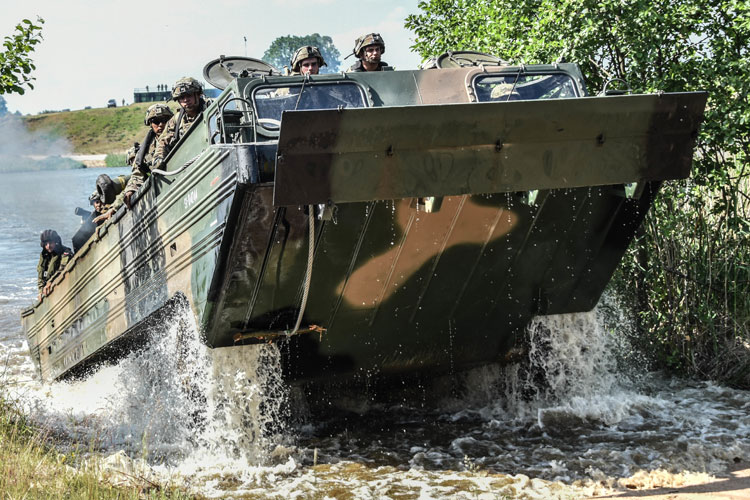 The PTS is a Soviet-made amphibious tracked transporter used by the Polish Armed Forces, based on the ATS-59 artillery tractor and T-54 tank, writes Bob Morrison.

Most recently seen during the Polish-US exercise ALLIED SPIRIT on Drawsko Pomorskie Training Area, part of the COVID-delayed and consequently downsized DEFENDER-Europe 20 exercise series, the PTS-M is regularly used by both Mechanised Infantry and Marine Infantry formations of the Polish Armed Forces.

Originally conceived as a means of transporting a light artillery tractor and field gun with crew across stretches of inland water such as rivers and lakes too wide to be speedily bridged, the Plavayushchij Transportyer Sryednyj or Medium Floating Transporter has a cargo payload of 10 tonnes and an empty weight of around 17.5 tonnes. Although not primarily configured as a personnel carrier, unlike the USMC Amphibious Assault Vehicles it is unarmoured and it has no passenger seating, the PTS is able to convey an infantry platoon plus personal weapons and equipment across a river or from ship to shore; the Polish Armed Forces regularly use the PTS-M (improved) version for both purposes.

Measuring 11.5 x 3.3 x 2.65 metres overall, the PTS-M offers a load area of approximately 7.8 x 2.5 metres behind the enclosed two-man cab. A full width tail ramp, lowered and raised by cables, provides access and egress for vehicles and passengers. Powered by a V-12 water-cooled diesel engine developing 350hp, the transporter has a maximum road speed slightly in excess of 40km/hr (25mph) and it can achieve around 10km/hr in the water courtesy of twin propellers. Essentially developed from the T-54 main battle tank, the boat-hulled PTS-M has six road wheels each side (one more than the tank) which identifies it from the similar but later PTS models, based on the T-64 and T-80, used by the Soviets and now the Russians.

The older photos on this page were taken by Carl and myself in Poland in 2015. The vehicles with the three-colour camouflage scheme were seen crossing the Drawa River on Drawsko Pomorskie Training Area in May and the grey vehicle was photographed three weeks later in mid-June on BALTOPS 15 at Ustka, where it was bringing Marine Infantry ashore from a tank landing ship during a multinational amphibious assault. It is likely that the PTS-M would have been used again for the planned amphibious phase of the recently concluded BALTOPS 20 had the scope of the annual multinational exercise not been curtailed in response to the pandemic crisis.