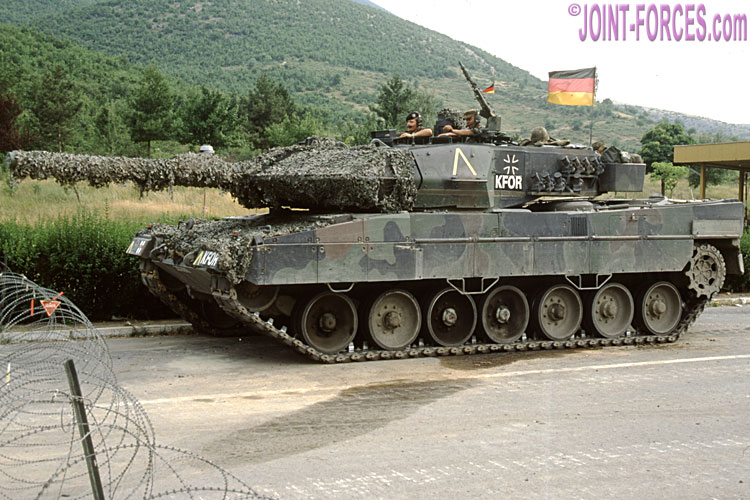 During the invasion of Kosovo by KFOR, 28 Leopard 2A5 main battle tanks formed the spearhead of the German contingent that advanced from the south-west on 12th June 1999 [© Carl Schulze]

In this sixth and concluding part of the series, Carl Schulze looks back at the Bundeswehr Leopard 2 mission history and provides a technical data table.

Mission History: Developed during the Cold War for the duel between main battle tanks in Central Europe in the event of an attack by the Warsaw Pact, the Leopard 2 MBT has been operationally used by the Bundeswehr only with its contingent of the NATO-led Kosovo Force (KFOR) on the peacekeeping and stabilisation mission between 1999 and 2005.

During the invasion of the Kosovo by KFOR, 28 Leopard 2A5 main battle tanks of the Panzer Bataillon 33 and Panzer Bataillon 214 armoured battalions formed the spearhead of the German contingent when it advanced into Kosovo from the south-west on 12th June 1999. After the KFOR units had established themselves, the German Army used their Leopard 2A5 in Kosovo mainly to secure checkpoints, to show presence, to conduct patrols and as a powerful reserve.

On 26 June 1999, a battle tank deployed at a checkpoint in the Orahovac area fired four warning shots with its 120 mm Rh-120 L/55 smoothbore gun when unrest broke out in the village. This gunfire pacified the situation immediately. So far this has been the only time a German Army Leopard 2 MBT fired its 120mm smoothbore gun in anger.

In Late 2000 and early 2001 the Leopard 2A5 was replaced by the Leopard 2A4 due to the easing of the situation in Kosovo. In 2005 the Leopard 2A4 tanks were also withdrawn from Kosovo, as no MBTs were needed any more in the region. Prior to this they had been used in 2001 as a means of deterrence to protected German bases in the Tetovo area of the Former Yugoslav Republic of Macedonia – since 2019 the Republic of North Macedonia and a NATO member since March 2020 – when civil unrest broke out there between Albanians and Macedonian.

Conclusion: Sound development work in the 1970s, the durability of various main components and sub-systems, and the continuous effort to modernise and upgrade the Leopard 2 ensures that even today, after 40 years of service, the tank is equal to or even superior to all main battle tanks in service worldwide.

It is to be expected that variants of the Leopard 2 main battle tank will continue to form the main weapon system of the German Army’s armoured units for at least another 15 years. From 2035 onwards, it is currently planned to successively replaced the Leopard 2 MBT with the so-called new Main Ground Combat System (MGCS), a French-German project of which development work was initialised in 2012.

Bundeswehr Leopard 2 Stocks: Between 1979 and 1992 the Bundeswehr received a total of 2,125 Leopard 2 main battle tanks and 31 Leopard 2 driving training tanks, then between 1992 and 1994 a total of 75 Bergepanzer 3 Büffel armoured recovery vehicles were added.

After the end of the Cold War the number of MBTs was gradually reduced drastically, with many vehicles being handed over to NATO partners and friendly nations. In the future, the armoured corps of the German Army will have an inventory of 328 Leopard 2 main battle tanks in various versions.

At the end of 2019, the following battle tank variants and special vehicles were in service: