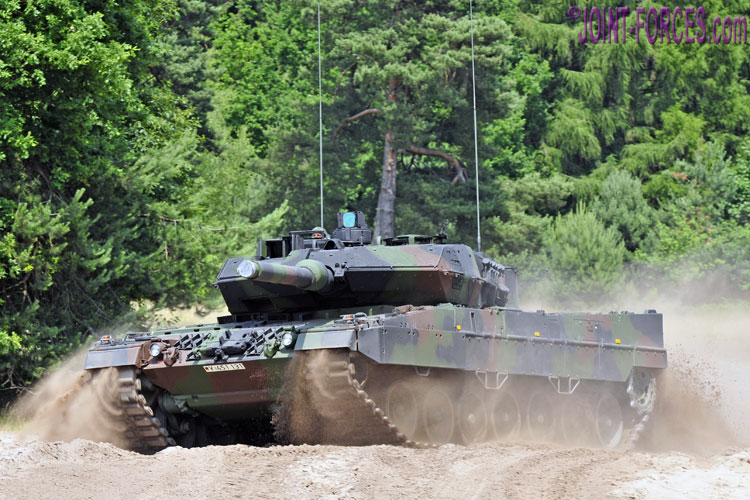 In this fifth and penultimate part of the series, Carl Schulze looks at the Leopard 2A7 and 2A7V versions plus the Special Purpose Vehicle variants.

Leopard 2A7 and Leopard 2A7V: The short-term transfer of 20 Leopard 2A6M main battle tanks to Canada for deployment in Afghanistan and compensation for the ‘loss’ in the form of 20 Leopard 2A6NL, which were procured with Canadian funds from Dutch stocks, as well as Canada’s obligation to finance the conversion of the vehicles to Leopard 2A6M status, was used by the Bundeswehr to carry out further upgrades to the MBTs at its own expense.

The result of this work was the Leopard 2A7, of which the German Army received a total of 20 from December 2014. This vehicle, which can be deployed in all climatic regions without restriction, has the following modifications: an Energie- und Kampfraum Kühlanlage (EKKA) air-conditioning system, that incorporates an auxiliary generator in the rear right sponson and the air conditioning system in the rear of the turret; a PERI R17A3 commander’s panoramic periscope, with integrated Attica thermal imaging system; a new fire suppression system; an Integriertes Führungs- und Informations System (IFIS) battlefield management system; the SOTAS-IP intra-vehicle and inter-vehicle voice and data communication system, including a tank infantry phone at the rear of the hull; preparation for the installation of modular add-on armour packages; and a new stowage concept for vehicle accessories and personal equipment of the crew. However, one of the most important innovations is the modification of the tank gun so that it can fire programmable ammunition with airburst capability, such as the DM11 Multi Purpose High Explosive (MP-HE) ammunition, whose fuse can be used as an impact, delay or variable time/proximity type, thus allowing targets to be engaged from behind cover.

On 29th October 2019, the first of a total of 104 Leopard 2A7V main battle tanks was handed over to the Bundeswehr at the Krauss-Maffei Wegmann GmbH & Co KG plant in Munich. The V suffix in the vehicle designation stands for Verbessert, which means Improved. The major improvements include a new module of add-on armour at the hull front, a new thermal imaging sight for the gunner, the installation of the SPECTUS multi-spectral driver’s vision system, a modified final drive and a new air conditioning system.

Special Purpose Vehicles: From 1986 onwards, the Bundeswehr procured a total of 31 Leopard 2 driving training tanks; instead of a turret, these vehicles are equipped with a special cabin that offers environmental protection for the trainer and additional students, and they feature a dummy gun at the front.

With the Bergepanzer 3 Büffel (Buffalo) Armoured Recovery Vehicle, the Bundeswehr procured the first real Special Purpose Vehicle based on the chassis of the Leopard 2 main battle tank. A total of 75 ARVs were delivered between 1992 and 1994. The ARV tasks include: recovering tracked vehicles from heavy terrain and from water; towing tracked vehicles up to the MLC 70 weight category; assisting in repair work; combat recovery of Leopard 2 MBTs using the combat recovery system; replacement engine transport; and clearing obstacles and carrying out earthworks.

For operations abroad, six of the vehicles were upgraded to Bergepanzer 3A1 Büffel, four in 2012 and two more in 2017. These vehicles were fitted with an add-on armour package, a mine protection kit, the SPECTUS multi-spectral driver’s vision system and the Integriertes Führungs- und Informations System (IFIS) battlefield management system. As part of the upgrade process their crew compartment was also partly reconfigured.

More recently, 52 of the Bergepanzer 3 Büffel ARVs were also upgraded with the SPECTUS multi-spectral driver’s vision system; these were given the designation Bergepanzer 3A0A1 Büffel.

The Gepanzertes Brückenlege System Leguan is an armoured bridge layer based on the Leopard 2. This vehicle is capable of laying two 14-metre long short-bridges or one 26-metre long long-bridge; both bridges have a load capacity of MLC 80. Overlapping of the bridges is possible so that water obstacles up to a width of 40 metres can be overcome with two 26-metre bridges. From July 2018 onwards a first batch of seven Gepanzertes Brückenlege System Leguan bridge-layers was issued to the Armoured Engineer units of the German Army. However, the forces actually have a requirement for 30 of the vehicles.