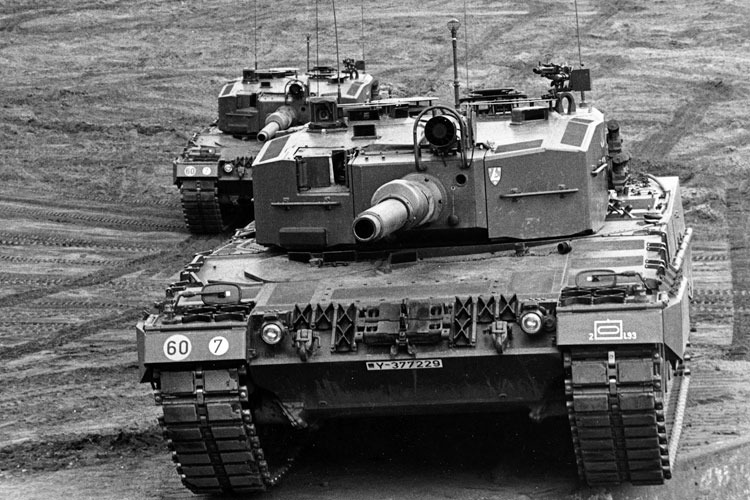 On 24th October 1979 the first series production Leopard 2 MBT was officially handed over to the Bundeswehr - here Leopard 2 MBTs of 2 Kompanie, Panzer Lehr Bataillon 93 can be seen on the Munster South Training Area [©BMVg]

In this third part of the 40 years of the Leopard 2 MBT story photojournalist and military historian Carl Schulze looks back at the series production batches.

After testing in the USA the prototype Leopard 2AV was also tested by the German Armed Forces and, based on the test results, the Leopard 2 was made ready for series production.

In May 1977 the Leopard 2 was finally declared ready for introduction into service and in June 1977 it was approved for operational use. That September the Ministry of Defence decided to procure 1,800 Leopard 2 main battle tanks in five production batches; later this number was to be increased. Krauss-Maffei Wehrtechnik GmbH was commissioned as prime contractor for the series production and 45% of the vehicles were to be built by Krupp MaK Maschinenbau GmbH in Kiel. Rheinmetall AG was responsible for the production of the 120 mm smoothbore gun Rh-120 L/44.

Above: Rear view of a Leopard 2 MBT of the 1st production batch – note the covered cross-wind sensor on the roof of the turret; this was omitted on later production batches. Front view – Production of the 1st batch of 380 Leopard 2s took place in 1979 and 1980 but with the thermal imaging system not yet being ready for production these MBTs were fitted with the PZB 200 passive targeting and observation system which was mounted on the mantlet above the gun barrel.

From autumn 1978 onwards further tests and troop trials were carried out with three pre-production vehicles. After these were manufactured, official series production started with the fourth vehicle. On October 24, 1979, the first series production Leopard 2 main battle tank was officially handed over to the Bundeswehr and deliveries of the First Batch, of 380 vehicles, was completed by 1980. These vehicles did not yet feature a thermal imaging system and instead were equipped with the Passiven-Ziel-und-Beobachtungsgerät 200 (PZB 200) passive targeting and observation system.

The Second Production Batch of 450 Leopard 2A1 vehicles was delivered between 1982 and 1983. These tanks were the first fitted with the thermal imaging system that was integrated into the Hauptzielfernrohr (HZF) EMES 15 stabilised main sight of the gunner. Another modification was the omission of the crosswind sensor mounted on the turret roof. The vehicles of the First Batch were retrofitted with this thermal imaging system and were given the designation Leopard 2A2.

The Third Construction Batch, of 300 Leopard 2A1 variants, was delivered in 1983 and 1984. Again, the vehicles had slight modifications, such as the commander’s PERI R17 panoramic periscope sight being mounted 50 mm higher. In 1984 and 1985, the 300 vehicles of the Fourth Batch were delivered; these now had the Fleckentarnanstrich (FTA) camouflage scheme ex-works, consisting of the three colours Teerschwarz (Tar Black) RAL 9021 F9, Lederbraun (Leather Brown) RAL 8027 F9 and Bronzegrün (Bronze Green) RAL 6031. They were also equipped with the new radios of the SEM70/80/90 family. These vehicles were designated as Leopard 2A3.

The 370 vehicles of the Fifth Batch, delivered between 1985 and 1987, were designated Leopard 2A4. They were equipped with the digital ballistic data computer (DigBal) and a fire suppression system. During their production run the ammunition hatch on the left side of the turret was removed and replaced by a welded plate.

The last of a total of 2,125 Leopard 2 Main Battle Tanks produced for the Bundeswehr was handed over on 19 March 1992.