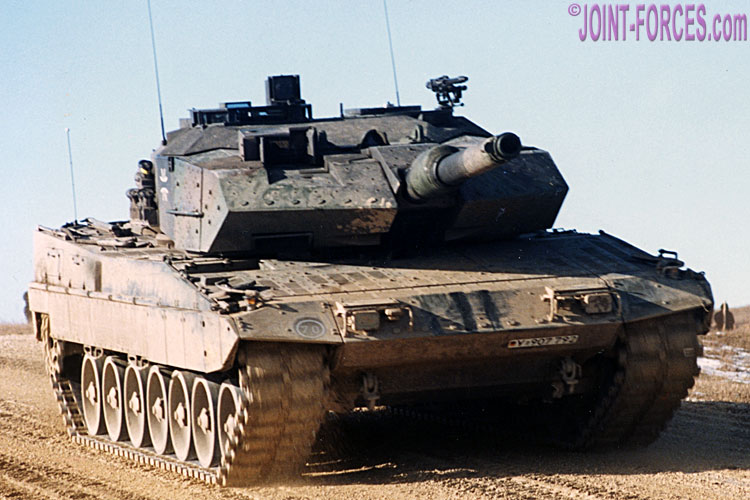 In this fourth part of the series, photojournalist and military historian Carl Schulze looks back at combat power improvement plus the 2A6 and 2A6M versions.

Improving Combat Power: Already during the series production run the responsible authorities began to think about a successor for the Leopard 2, or a possible improvement of the combat capabilities of the Leopard 2A4 in terms of firepower, armour protection and command ability.

The end of the Cold War led to the discontinuation of various armament projects, including that of the Panzer Kampfwagen 2000, which was intended to replace the Leopard 1. There was also no longer any question of a successor for the Leopard 2 being procured. Thus the focus was now on upgrading the Leopard 2, with the German term for combat capability improvement being Kampf Wert Steigerung (KWS). This KWS programme for the Leopard 2 was divided into three individual sub-programmes.

The KWS I programme covered the improvement of firepower by fitting the vehicle with the approximately one metre longer Rheinmetall 120 mm smoothbore gun Rh-120 L/55 and the introduction of a more powerful kinetic energy ammunition known as LKE. The KWS II programme was focused on improving armour protection and the command and control of the MBT. With the KWS III programme, the firepower was to be further increased by fitting a 140 mm smoothbore gun and an automatic loader to ensure long-term superiority in duel situations. Budget issues and the steadily easing security situation in Europe meant that the KWS III programme was not implemented and the KWS II programme was only implemented in part.

In December 1993, Krauss-Maffei Wehrtechnik GmbH was contracted to upgrade 225 Leopard 2A4 MBTs to Leopard 2A5, by improving them with components from the KWS II programme. An order for the conversion of 125 further vehicles followed. In the end, however, only 285 vehicles were upgraded. The first Leopard 2A5 was handed over on 30th November 1995.

The main innovations included: an add-on armour package for the turret, covering its front and the front part of its sides; an electric gun control system; the PERI R17A2 commander’s periscope with integrated Thermal Imaging Module or TIM; a spall liner for the turret; an electric firing system of the main gun; a sliding hatch for the driver, which replaced the swivel hatch; a vehicle navigation system with integrated GPS; a rear view camera for the driver as a reversing aid; and a redesigned turret rear with a new stowage concept. This vehicle has a combat weight of 59.7 tons.

Leopard 2A6 and Leopard 2A6M: The KWS I programme measures were implemented with the procurement of the Leopard 2A6 MBT. The major improvement of this vehicle was the fitting of the Rheinmetall 120 mm smoothbore gun Rh-120 L/55. With the new DM33A1 LKE II Armour Piercing Fin-Stabilised Discarding Sabot (APFSDS) ammunition, the gun is able to engage armoured targets at distances out to 4,000 metres. Between 2001 and 2005, 160 Leopard 2A5 and 65 Leopard 2A4 were upgraded to Leopard 2A6 standard, making a total of 225 units.

Lessons learned from Bundeswehr operations in Bosnia-Herzegovina and Kosovo, where its forces were confronted with an extreme mine threat, the transformation of the Bundeswehr into an operational army, and the increase in out-of-area deployments made it necessary to improve the mine protection of the Leopard 2A6.

Between 2004 and 2008, therefore, a total of 70 Leopard 2A6 tanks were modified to 2A6Ma. These vehicles were equipped with a mine protection kit, which included a mine protection belly plate under the hull and a belt seat for the driver attached to the hull roof. In addition, some of the ammunition storage points in the hull and turret were omitted, while the turret slip ring, torsion bars and seats in the turret were modified. The mine protection kit increased the weight of the main battle tank to about 62.1 tons.