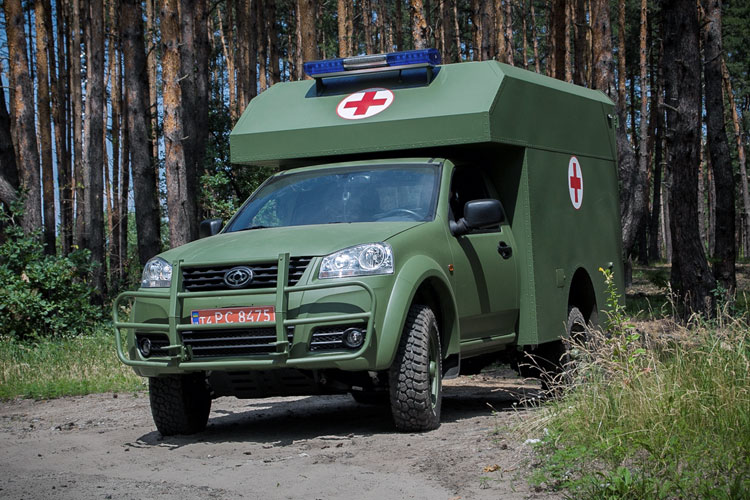 The BOGDAN 2251 Ambulance is a light 4×4 medical vehicle produced for the Ukrainian Armed Forces by the Bogdan Corporation in their Cherkasy factory, writes Bob Morrison.

Possibly better known for their bus and trolleybus production, manufactured at their primary factory in Lutsk, the Bogdan Corporation also produces modern all wheel drive trucks and light utility vehicles in Cherkasy for Ukraine’s military forces; their Model 2251 ambulance is a variant of their Model 2351 pick-up truck.

My first encounter with a BOGDAN 2251 Ambulance was while photographing a battlegroup advance to contact during Exercise RAPID TRIDENT 19 on the Yavoriv training area, about an hour to the west of Lviv. The vehicle was parked up out of sight behind an elevated viewing point, from where a multinational team of evaluators from the International Peacekeeping and Security Centre was overseeing the battle, with its standby two-man crew deployed forward so they could monitor the action and be on hand in case of accidents. As the ambulance was closed down and I was sharing a vehicle out in the heart of the live exercise area with a US Army combat camera team, so consequently had to go where they went, I was unable to hang around for the driver and medic to return at Endex and so did not get a chance to look inside this interesting vehicle.

Based on the Wingle 5 chassis produced by the Chinese manufacturer Great Wall Motors, which uses a licensed copy of an Isuzu bodyshell, this ambulance has been in service since 2018. In a news release dated 28 November 2018 the company stated: “Bogdan Corporation has fulfilled the contract on production and supply of BOGDAN 2251 medical vehicles ahead of schedule. All cars were sent to the Armed Forces of Ukraine. The military have received the final batch. Those vehicles are designed to transport or evacuate the wounded to hospitals.” The release goes on to state that this ambulance model was “designed for military medical units, mobile evacuation units, and by military hospitals of the Armed Forces of Ukraine. It could be used to evacuate the wounded from the military medical units and field hospitals. The vehicle could transport eight wounded.”

On 29 January 2019, the company’s press department issued another release, accompanied by this photograph of the ambulance in action, which stated: “The experimental evacuation platoon of one of the military mobile hospitals had to perform their first battle mission after Ukrainian detachments near the town of Popasna in Luhansk region of eastern Ukraine came under Russia-backed militants’ fire, the General Staff of the Armed Forces of Ukraine informs. That was the combat début of the newly-organised Special Medical Forces. The military doctors’ actions proved that they are ready to perform the tasks assigned.”

From this photo it is clear that two stretchers can be transported on the left side, with one of the pair on a folding rack suspended on straps, and other photos exist showing this arrangement is repeated on the right; however as there is a door in the right side of the rear compartment just behind the cab, the rack arrangements are not mirrored exactly. When a full complement of four stretcher casualties is not carried, up to eight ambulant casualties can be transported with four sitting on inward facing seats on the left, two on similar seats on the right, and two on rearward facing fold-down seats on the bulkhead behind the two-man cab. When stretcher casualties needing attention in transit are carried, the medic would accompany them on the centre-most of the two rear-facing seats.

I did not spot any examples of the Model 2351 pick-up truck in the field during RAPID TRIDENT 19, but this too is based on the Wingle 5 pick-up. Company photos, and most others photos on the web, show the in-service vehicle to be a four-door light cargo pick-up truck but a two-door heavier cargo version has also been displayed by Bogdan Corporation. Payload for the four-door version, which is powered by a 2-litre 134hp turbo-diesel engine is given as 1100kg and maximum road speed declared by the manufacturer is 140km/hr.