Home > Exercise News > DEFENDER-Europe 20 ~ US Armour On The Move

DEFENDER-Europe 20 ~ US Armour On The Move 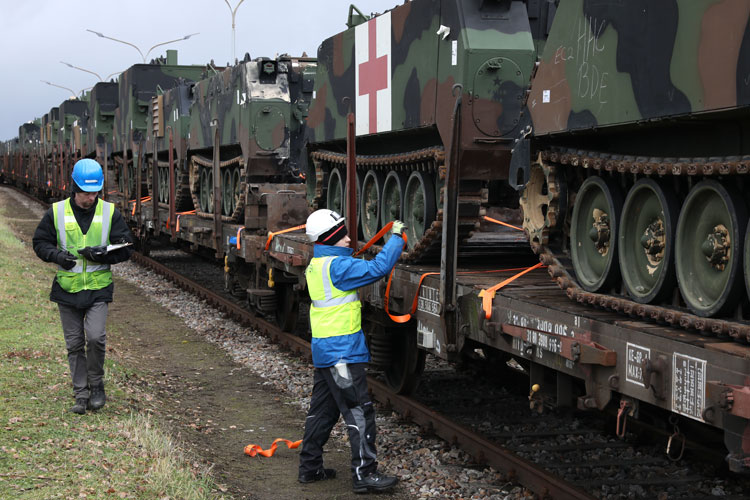 US Army troop carrier vehicles are secured and tagged onto railcars as part of an APS movement at Coleman Barracks, Mannheim, Germany, 28 January 20 [US Army: Spc. Elliott Page]

Yesterday, 31st January, the US Department of Defense released the first images of prepositioned armour and equipment on the move for DEFENDER-Europe 20, writes Bob Morrison.

Exercise DEFENDER-Europe 20 (DEF20) is the deployment of a division-size combat-credible force from Continental United States to Europe, including the drawing of equipment and the movement of personnel and equipment across the theatre, from the North Sea ports by way of Germany and Poland to the Baltic States.

Earlier this week the first US Army Prepositioned Stock (APS) movement for DEFENDER-Europe 20 commenced at Coleman Barracks in Mannheim, with military heavy trucks being being transported by commercial carriers and armoured vehicles being loaded onto railway flatcars for onward transport to forward locations where incoming troops will pick them up. Over this weekend the first of several transport ships is scheduled to dock in the Scheldt / Schelde estuary to unload vehicles and equipment bound for logistics bases in Germany.

The largest deployment of US-based forces to Europe for an exercise for over 25 years, DEFENDER-Europe 20 is effectively a REFORGER (REturn of FORces to GERmany) for the 21st Century and is similar in concept and scope to the last major (though not quite final) exercise in that series, namely REFORGER 90 / CENTURION SHIELD.