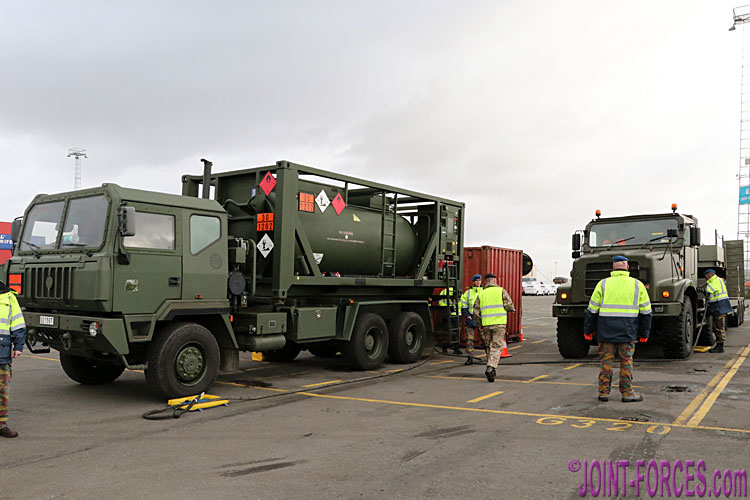 Over the next few weeks NATO logistic units will move US vehicles across Europe in a ‘Pony Express’ operation during the DEFENDER-Europe 20 deployment, reports Bob Morrison.

The DEFENDER-Europe 20 (DEF20) deployment exercise will see over 20,000 US troops being flown from bases on the Continental United States (CONUS) to central northern Europe where many of them will then collect prepositioned vehicles and equipment held in storage areas or unloaded from strategic sealift ships at ports on the North Sea and transported eastwards to staging areas.

The first phase of this massive logistic operation on mainland Europe commenced at the end of January, with Belgian clearance divers checking Antwerp Docks prior to the arrival of the British Ro-Ro (Roll-on / Roll-off) ferry MV Eddystone, on Monday 3rd February. Aboard this sealift vessel was a large number of logistic vehicles which are now playing a major part in moving prepositioned US Army Prepositioned Stocks (APS). See the links below for more.

Belgium is one of three NATO countries with North Sea ports, the others being Germany and The Netherlands, who are offering Host Nation Support to the US Army for what is billed as the biggest exercise deployment of troops from the United States to Europe in over a quarter of a century. When the British Army vehicles drove ashore from Eddystone their fuel tanks needed filling, as peacetime safety regulations prohibit carriage of vehicles with full tanks on ferries, and so the Belgian Army’s 29 Bataillon Logistique stepped forward with a DFDC (Deployable Fuel Distribution Capability) module on an Iveco ASTRA truck to top up the British vehicles inside the Temporary Military Village set up on the dockside. In addition to the DFDC being used to refuel the mostly HET and MAN SV convoy, our Belgian hosts also lined up two more modules on Iveco 6×6 and Iveco 8×4 trucks for us to photograph off to one side without interrupting the refuelling team.

The DFDC module, which weighs 12 tonnes when full, consists of an 8,000-litre tank, a diesel generator and a pump set all built into a standard 20-foot ISO container frame. The pump set can deliver 280 lpm (litres per minute) using various combinations of 50 lpm and 120 lpm nozzles. The two most common base vehicles for the Belgian DFDC are the Iveco ASTRA 6×6 with armoured cab, which has limited all-terrain capability, and the non-tactical Iveco ALC 8×4, which can also tow a three-axle trailer with a second DFDC to give 16,000 litres of fuel. It is also possible to fit two DFDC modules on a VANHOOL trailer towed by a Mercedes ACTROS 6×4 tractor.

As is to be expected of a major British Army heavy equipment long distance convoy move, line-haul in US parlance, the Royal Logistic Corps (RLC) also took along their own refuelling vehicles to escort the Heavy Equipment Transporters (HET) and MAN Support Vehicles (MAN SV) on their travels from the North Sea ports to eventual destinations in Poland – and possibly a little further away during the FTX phase of the integrated exercises running alongside DEF20.

The British Army’s MAN SV Unit Support Tanker (UST) Medium (Improved Medium Mobility) 9 Tonne 6×6, which is similar in role to the Belgian DFDC on Iveco ASTRA 6×6 combination, is based on the MAN SX44 and has a 7,000-litre fuel tank. According to Carl Schulze, our MAN SV expert, this refueller’s pump set situated behind the fuel tank incorporates an Alfons Haar FPOS 100-1135R-XI positive-displacement pump unit and incorporates two hose reels with hoses and attached trigger nozzles, two hand rewind bounding reels, gauges for measuring pump pressure and vacuum, and five-digit mechanical registers. This is the more off-road capable of two British UST models, the other and more numerous version is classed as having just Medium Mobility.

The Oshkosh Close Support Tanker (CST) used by the British Army for bulk refuelling has a quite similar tractor unit to the 8×8 HET (Heavy Equipment Transporter) but is instantly recognisable by having only two rear axles instead of three. In US service this vehicle is known as the Oshkosh MTVR (Medium Tactical Vehicle Replacement). The British CST is powered by an 11.9-litre, 6-cylinder Caterpillar C-12 diesel engine developing 430hp and giving a top road speed of 105km/hr. There are three distinct variants of the CST in British service: the 20,000-litre Close Support Tanker (Fuel); the 18,000-litre Close Support Tanker (Water); and the 15,000-litre Tactical Air Refueller. The cab can have enhanced blast-proof armour fitted for driver and crew protection.