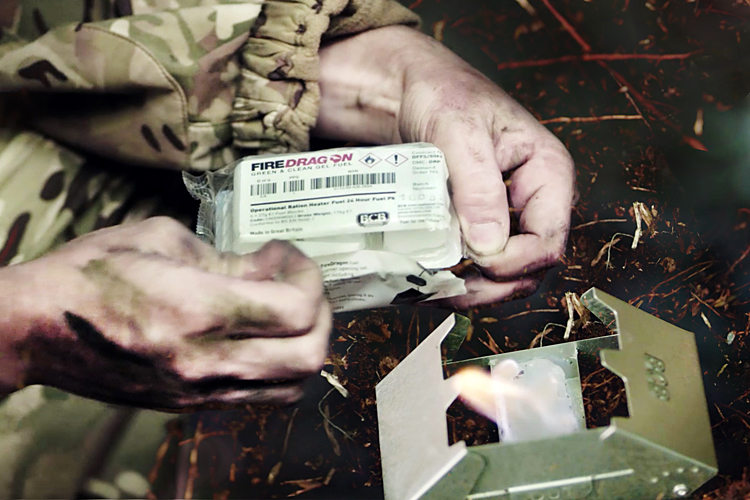 The UK MoD has awarded a new contract for environmentally-friendly FireDragon fuel which has helped to reduce the British Army’s carbon footprint.

Press Release, 03 September 2019: The FireDragon fuel and its associated foldable cooker will be yet again be issued to British soldiers to help them warm their drinks and heat their operational rations.

The fuel which is manufactured in the UK by Cardiff-based BCB International Ltd, has a high purity of ethanol,is clean, burns quickly and intensely with a significantly reduced cook time compared to other solid fuels. It is made primarily from renewable waste vegetation. Having used over 2 million packs of FireDragon fuel in the first years of the contract, the UK Ministry of Defence has managed to significantly reduce its carbon footprint compared to the previously used toxic hexamine fuel.

Following numerous independent tests, BCB’s chemist, Ben Harrison, confirmed that FireDragon will reduce the carbon emissions of the British Army and reduce the carbon footprint of its operations by a substantial amount. Harrison also added that: “Hexamine emits cyanide and a lot of noxious fumes such as formaldehyde and nitrogen oxides when it burns. Formaldehyde and ammonia are also used in its production, bringing their own hazards. Hexamine produces a lot of carbon monoxide, especially when compared to FireDragon. FireDragon, by contrast emits, no formaldehyde or cyanide”.

The Head of Commercial at Leidos Supply Limited said: “The ethanol fuel blocks have proved convenient and effective; and the individual cooking system is highly regarded by British Troops.”

The new contract will run for four years. Other European militaries are currently evaluating the fuel.

Team Leidos operates the commodity procurement, storage and distribution functions previously performed by the MOD’s Logistic Commodities and Services Operating Centre. Since 2015, the Logistics, Commodities Services and Transformation Programme has delivered over £1bn products to the UK Military using cutting-edge procurement techniques and strong governance. Team Leidos brings together a skilled and experienced team of private sector defence and logistic partners with the global expertise to deliver the digital transformation required. The partners include: