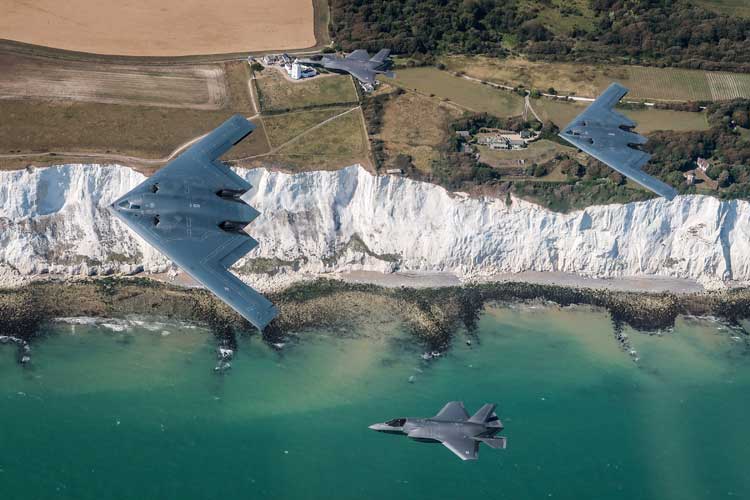 For the first time, RAF F-35 Lightning jets have been conducting integration flying training with the B-2 Spirit stealth bombers of the USAF.

RAF Press Release, 30 August 2019: For the first time, Royal Air Force F-35 Lightning jets have been conducting integration flying training with the B-2 Spirit stealth bombers of the United States Air Force as part of their deployment to RAF Fairford in Gloucestershire, UK.

The USAF deployment of the B-2s from the Bomber Task Force Europe is long-planned. Whilst deployed to the UK the aircraft will conduct a series of training activities in Europe. During this deployment, RAF F-35B Lightning fighters are conducting sorties with the USAF B-2 bombers. Both are 5th generation aircraft and this is the first time that USAF B-2s have trained with non-US F-35s.

Minister for the Armed Forces, Mark Lancaster said: “NATO is the bedrock of Euro-Atlantic defence, and those secure foundations continue to be reinforced by the training exercises being completed between the Royal Air Force and our special friends in the US Air Force.”

Group Captain Richard Yates, Chief of Staff at the UK Air Battle Staff said: “We’re delighted that the USAF and 501st Wing Bomber Task Force are here in the UK and that our F-35 Lightning pilots have the chance to fly alongside and train with the B-2 bomber crews. This is the first time that any other country has done this.

“This flying integration builds on the work of Exercise LIGHTNING DAWN in Cyprus and the visit of RAF F-35 Lightning to Italy in June, where in both cases it had the opportunity to prove itself among other NATO allies who also operate the aircraft.”

“Our Royal Air Force friends are integral to the 509th Bomb Wing mission,” said Lieutenant Colonel Rob Schoeneberg, Bomber Task Force Commander. ”The beauty of our partnerships is that we get to understand how they see the world. Working alongside international fifth generation aircraft provides unique training opportunities for us, bolsters our integration capabilities, and showcases the commitment we have to our NATO alliance.”

RAF Fairford routinely hosts deployments and exercises by US strategic aircraft. These regular deployments reinforce the US Air Force Europe and the Royal Air Force’s unique and complementary partnership and our collective contribution to NATO.