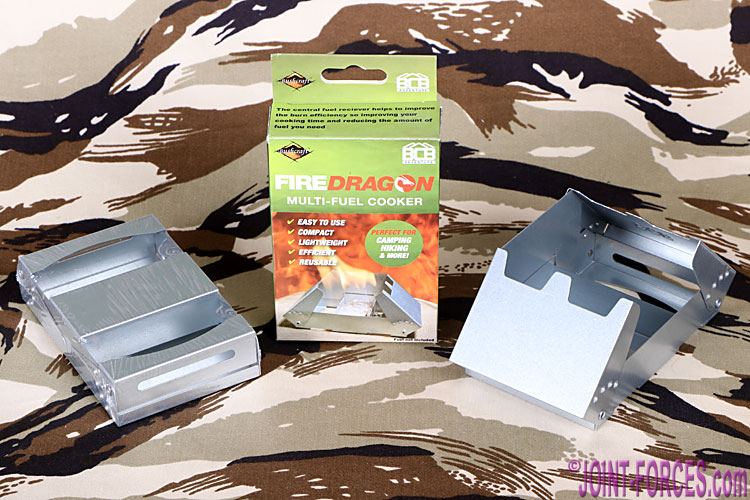 In the beginning: At the end of the last decade Cardiff-based BCB International, who had been working in conjunction with Professor Knight and Doctor Morgan of Cardiff University, unveiled a new development in the outdoor cooking fuel field. Christened FireDragon, as it burns and it’s Welsh, the experimental substance was an ethanol-based all-weather, non-toxic, biofuel gel sourced from UK-grown grain stock. Also capable of being produced in tablet form as a replacement for hexamine tablets, although originally primarily intended for civilian use in outdoor cooking stoves, FireDragon obviously had military applications too.

When FireDragon biofuel gel in bottles first became available for civilian purchase the Managing Director of BCB, who I have now known for close on a quarter of a century, sent me samples to try for myself and I was impressed. Shortly after, when tubs of the new fuel were available in more solid form, I ran a brief test against new (Methyl Decanoate) tablets being produced as a hexamine alternative by one of the traditional firelighter manufacturers as by this stage both new fuels were being evaluated by the UK Ministry of Defence, alongside three other products, as non-toxic replacements for the ‘hexi’ tablets invented in Germany in the late 1930s and still used by many armies worldwide.

Liquid gel fuels, just like camping gas cylinders, are by their very nature unsuitable for general military issue to troops on an individual basis, so even although FireDragon gel ignites easily and performs well in wind and rain, is non-toxic and odourless, comes from renewable sources and is safe for wildlife, to meet UK Forces requirements (and to keep the RAF happy when transporting it in their aircraft) the Welsh fuel’s properties had to be tweaked to turn it into more solid tablet form. The Cardiff boffins did precisely that and in the autumn of 2015 BCB International won the UK MoD Operational Ration Heater Fuel (ORHF) contract then by the following February the first tranche of several thousand 24-hour packs along with slightly redesigned Operational Ration Heaters (ORH) were delivered.

Three fuel tablet pods can be stowed inside the heater to save space – yes, I know that is lizard camo but I did not have any dragon camo to hand [©BM]

In early 2016, once the initial delivery commitments to UK MoD had been fulfilled, BCB sent me one of the new ORHF 24-Hour Fuel Packs (NSN-9110-99-426-2694) and a civilian packaged ORH (NSN-7310-99-587-4226), which is marketed as the FireDragon Multi-Fuel Cooker, to allow me to evaluate this latest NATO-Approved fuel and heater combination for the now defunct Combat & Survival Magazine. They also sent a pack of their Waterproof Matches, which are found in various NATO ration packs and Aircrew Survival Packs, but I used an ordinary domestic match to light the the fuel as I wanted to ensure that it was indeed easier to light than a hexamine tablet; any soldier who has tried lighting a hexi tablet in the field in anything but dry calm weather will know what a pain that can be. FireDragon easily passed this particular unscientific test, even in quite a stiff breeze.

Although we have covered many of the ration packs issued to British forces since 2001 in this sub-section of the JOINT-FORCES.com website the topic of heating them has only been briefly touched upon so I felt it was time to take another look at both the ORHF and ORH. The FireDragon tablet I used to heat the Tomato Pasta Salad retort pouch, from a 2017 UK 24-hour Operational Ration Pack, in the video clip below is the standard 27g or 1oz size issued to UK Forces and the Multi-Fuel Cooker is the commercial package version, but this is identical to the MoD-issue ORH.

You will see from the video clip that the FireDragon tablet ignited as soon as the match came in contact with it, and indeed I had more trouble getting the match to light than the tablet; I deliberately used a book of low quality matches from a NATO ration pack rather than more substantial windproof matches as I wanted to show just how easy it is to light the Welsh fuel tablet compared with hexamine, for which it seems sometimes even a blow torch will only just do the job.

When issued to troops the 24-Hour Fuel Pack contains six foil-topped tubs in an easily opened package and should be issued with one of these new, more compact, field cookers. The new design has both a built-in tray to hold the fuel tablet as it liquefies and a separate windshield which clips over the base and also stiffens the wings to give a stable platform for canteen or mess tin. Instructions for using FireDragon, which is not only non-toxic but can also be used to clean hands before handling food and will even light when wet, are printed on the packaging. To find our more go to FireDragonFuel.com and to see the full range of FireDragon products click on this BCBin.com link.

The video clip on this page has been truncated to stop the viewer falling asleep, but if you like watching paint dry you can see the full eleven minute sequence on our Vimeo page. FireDragon tablets are designed to bring 500mm of water from 20C to a rolling boil in five minutes and to continue for three minutes more, but in our unscientific field test a single tablet burned for ten minutes on a very blustery December day and heated the water from about 10C. Two examples, flat and folded, original and copy, of the much less substantial and sometimes prone to tipping Elbit-style hexamine fuel tablet heater found in many NATO ration packs in front of the UK ORH [©BM] The new UK ORH is a little less bulky than its predecessor and, filled with three fuel pods, it will easily fit in the very handy Hexi Pouch produced by Dave of BritTac [©BM]