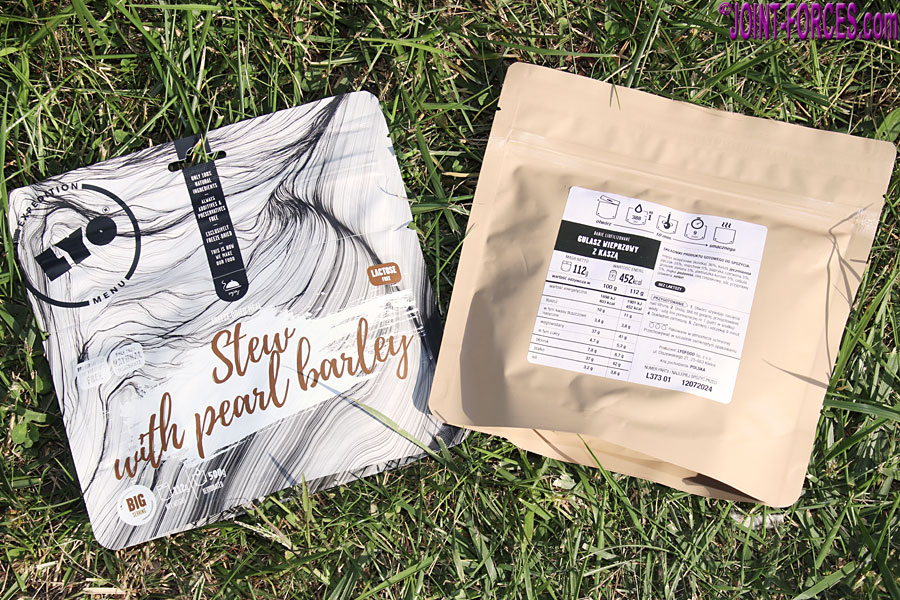 LYOFOOD Sp. of Kielce, a major town roughly halfway between Warsaw and Krakow which hosts the annual MSPO defence and security expo, is famed for its expedition foods consumed by explorers and extreme outdoor sports athletes. However what is perhaps less well known is that they also produce freeze-dried meal items for military ration packs.

Poland’s Armed Forces are currently nearing the end of a process, like many projects delayed by the COVID-19 pandemic, to completely revised their combat rations and the next evolution is expected to include lightweight freeze-dried components for packs intended for use by Special Forces, Special Operations Forces, and Rapid Response formations deployed in areas where water is abundant. We had hoped, having covered the evolving Polish Rations topic since 2020, that example of the new packs might be available at the recent MSPO 2022 expo but at the show we were informed that partly due to the evolving security situation in Eastern Europe since MSPO 2021 the project has not yet completed its third and final stage. The LYO FOOD team were at the expo in early September and in addition to confirming that they were working with Poland’s Military Research & Development Center For Food Services (Wojskowy Ośrodek Badawczo-Wdrożeniowy Służby Żywnościowej or WOB-WSŻ) to ensure they could meet future requirements.

As well as allowing me to take one of their military meal pouches off the stand to photograph it alongside the civilian equivalent, the LYOFOOD team also gave me three main meals and a desert to bring back to try out in my own time. As I was only on a whirlwind trip to Kielce this year, because I needed to travel back to Copehill Down for ARMY EXPO 2022 which overlapped the Polish expo, and consequently I needed to travel light with only a daysack / camera back and small under-seat laptop & clothing (i.e. spare shirt, socks & shreddies in a vacuum bag) case, I was really glad that these were freeze-dried pouches which not only took up minimal room but only used up about 400g of my carry-on weight allowance.

The four freeze-dried pouches I brought away from the expo were: Pork Stew with Pearl Barley (Gulasz Wieprzowy z Kasza) – 112g net weight; Traditional Polish Sauerkraut (Bigos or Hunter’s Stew) – 80g net; Chicken Tikka Masala with Rice (Kurczak Tikka Masala z Ryzem) – 128g net; and Apple Crumble (Kruszonka z Jablkiem) – 70g net. Rehydrated weights were 500g for the meals and 140g for the desert, with a fill line printed inside the pouch on both sides to ensure the correct amount of water was added and an indication in ml also printed on the comprehensive three-language (English / Polish / German) instruction and ingredients label which peels back to reveal ten more. After tearing open the top and extracting the oxygen absorber then adding hot boiled water and giving a good stir before closing the zip-lock, main meals needed to be stood for 9 minutes and the dessert for 2 minutes.

Whenever I am travelling to foreign parts I try to eat what the locals are consuming wherever possible, as life is way too short to be a fad eater or a traditionalist, though should a decent Full English be available at breakfast time I will usually start the day off this way if I don’t know when the next meal opportunity is likely to arise. The traditional Gulasz and Bigos therefore held no surprises in store for me, and of course the CTM and Apple Crumble are British staples, but I have to say that I was pleasantly surprised by both the quality and the taste of all four dishes. LYOFOOD pride themselves on only using natural ingredients and on being preservative and additive free… and this shows up in their products. These four definitely earned my seal of approval.

For current and past Polish military rations see:-