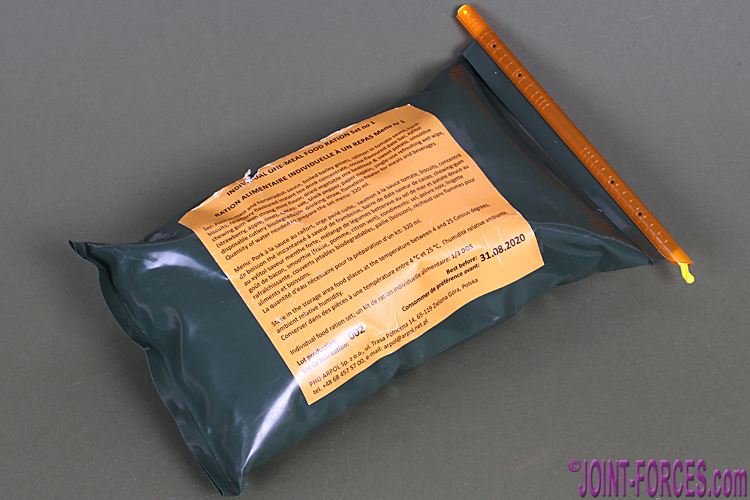 At the recent Eurosatory defence expo in Paris, our senior correspondent Carl Schulze picked up a sample of the IRŻ 1-Posiłkowa, which is effectively a downsized version of the previously covered 24-hour IRŻ pack. Distributed by KADAR Poland, who gave Carl the sample featured here, but according to the label actually produced by PHU ARPOL Sp, this example has an English & French contents label and, unlike previously reviewed Polish 24-hour ration packs, it contains retort pouches for the main courses rather than tins.

Contents gently slipped out of the pack [© BM]

According to KADAR, these single meal ration packs have a two year shelf life (when stored between 0°C and 25°C ) and provide 1200-1300 kcal of energy dependent on menu; they state that 30 different menu versions are available. An individual flameless heater or reusable flameless heater is included for producing hot meals and beverages with 250ml of water being required for beverage preparation. Pack dimensions are 320mm long by 175mm wide, though when full the pack width reduces except at the ends, though it should be noted that the ANYLOCK closure slider at the opening end is 50mm wider than the tough plastic pack.

The 1-Meal IRŻ which I taste tested was Set/Menu No.1 from production lot 002 and had a best before date of 31st August 2020; i.e. roughly 26 months after Carl collected it. With the exception of the plastic bag containing utensils, salt & pepper sachets, chewing gum and serviette, everything else was loose packed with the Flameless Ration Heater and heating bag wrapped around most of the contents to keep them together during packing.

Accessory pack – ours was missing a wet-wipe towelette [© BM]

I have not yet tried out the included SPEEDYHOT Flameless Ration Heater, which is supplied along with a zip-lock foil heating pouch with instructions in English on a large printed label, as this needs to be used in a well-ventilated open space, but I am confident it would provide more than enough energy to heat both main meal retort pouches as the chemical reaction after a little water is added is usually pretty fierce with this type of thing. I warmed my main courses up by standing in a pan of simmering water for about eight minutes and, though initially I decanted the pouches into separate bowls for photography I soon realised that the only way to eat this particular meal was to mix the pork and barley.

Taste is always a very personal thing and my palate is more geared to spicy than bland, so I cannot say this was the most tasty ration pack I have tried over the years. The Pork & Barley was hearty enough, but was way too unexciting for me so once I had photographed the meal and tasted a few mouthfuls I added some Tabasco sauce. About 20 years ago I was rather put off salmon after several days of eating it for almost every course of every meal at a Norwegian Army training camp, but the can contained in this Polish ration was actually not too bad at all and I scoffed it.

The Date Bar with Cocoa was exceptional, and with my sweet tooth I could eat these day after day, though I peel off the paper-like edible outer wafer layers (made of potato starch) before eating. The Dried Vegetables are possibly an acquired taste, and even though I like pickled beetroot I found these purplish flakes not to be to personal taste; conversely, although I am not a fan of sweet potato I actually quite enjoyed the orangish flakes which were bacon-flavoured.

The rock hard biscuits are probably best used as trauma plates, not least because no jam or cheese spread was included to liven them up, but alternatively they could be ground down into the main course to soak up the sauce. The lack of any coffee powder sachets seemed a bit strange, but as Chokeberry Tea is one of my favourites this was not really a problem. The smoothie was okay, but took a lot of stirring to get rid of all the lumps and even then it still tasted more like reconstituted powder rather than blended fruit.

Interestingly, our particular example had no Polish writing on the contents label but company illustrations for this ration show all three languages suggesting that is is being produced to NATO specification. Interestingly, the four pieces of cutlery appear to be white plastic but are actually compostable eco-friendly items produced by Scottish company Vegware.

By no means the worst ration pack I have eaten, but definitely not the most mouth-watering.