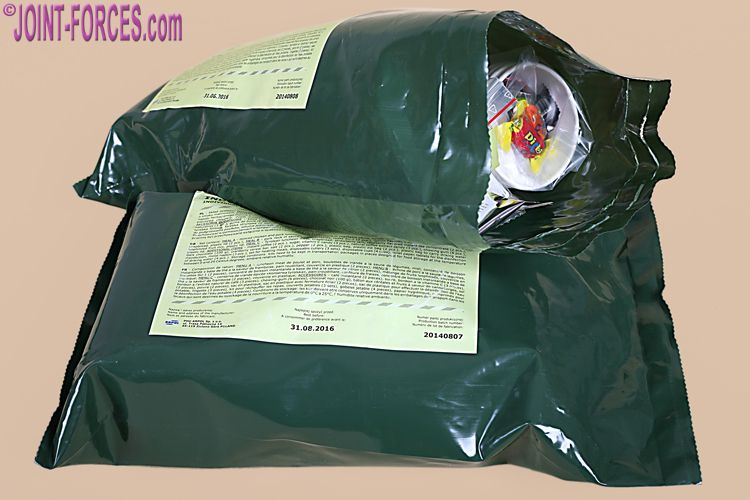 In the early summer of 2016, while I was out in Poland covering Exercise ANAKONDA ’16, the Polish Press Officer team was keen to have me publicise their latest ration pack outside of their homeland. I was impressed and, as short code examples of these packs are now appearing on the UK surplus scene, plus as Carl also recently picked up an example of the 2018 production batch Individual One-Meal Food Ration produced by Arpol, this reprise seemed in order before I tuck into our latest Polish ration sample.

Back in the February 2012 issue of COMBAT & SURVIVAL Magazine (which sadly ceased publication in March 2018 after its new sole director put the company into Liquidation) I featured the Polish WRŻ  – Wojskowa Racja Żywnościowa or Military Food Ration – which is effectively a 940kcal single meal pack version of the IRŻ 24-hour pack. Also produced by Arpol, a company created 25 years ago in 1993 to produce ration packs for the Polish Armed Forces plus emergency services and disaster relief teams, the WRŻ comes complete with a Flameless Ration Heater (FRH) for the main meal retort pouch and also includes a small pouch of water to activate the chemical reaction which generates the heat.

The one-meal WRŻ ration pack illustrated here is Menu W1 SH, which comes in a tough dark green outer bag which is similar to a US MRE outer. This pack was one of three choices available in 2012 each containing: a silver main meal retort pouch of Meatballs and Pasta in Tomato Sauce, Chicken Breast Casserole or Spicy Vegetable Rigatoni; two foil packs containing dried fruit or a fruit bar and concentrated drink or soup powder; a cellophane pack containing two ‘hard tack’ biscuits; a tub of fruit jam; the Flameless Ration Heater, wrapped around the main meal; a Polish/English instruction sheet for the heater plus a 45ml sachet of (non-drinking) water to activate it; an accessories pack; and a plastic utensils pack.

The accessories pack contained one tea bag, one sachet of coffee powder, four colourful sachets of sugar, salt, pepper, two small boiled sweets, two tablets of tooth-cleaning chewing gum and a strip of ordinary gum, a cleansing wipe, a strip of toilet paper and a small plastic bag for waste. The utensils bag contained knife, fork, spoon and teaspoon plus serviette. Our Menu W1 SH concentrated drinks sachet was raspberry (actually chokeberry) flavour instant tea beverage concentrate, which seems to be very popular in Baltic region ration packs and which I have developed a taste for even though I seldom drink tea, and the dried fruit sachet contained sultanas.

Turning now to the 24-hour IRŻ, also packed in a tough dark green outer bag, unlike the WRŻ it contained canned components rather than retort pouches and a reusable fold-up Field Cooker with fuel tablets rather than a single use FRH. As stated in my original magazine article, the use of cans rather than pouches makes this quite a bulky pack but as the cans are made from an ultra-lightweight aluminium alloy the weight difference between the two types of individual item packaging is actually comparatively minimal.

I was given two IRŻ packs for review during ANAKONDA 16, one at Wedrzyn during the urban assault phase and one at the live-fire demo at Drawsko Pomorskie the following day, and fortunately both were different (Menu S-RG-4 and Menu S-RG-5) which allowed me to sample a variety of meals cans. As far as I could determine, there were at least seven different Menu Sets in the S-RG series (there was also a 21 Menu S-R series, which I had not yet seen) and each of the seven packs provides in excess of 3,600kcal if all edible components are consumed.

The dark green outer packs have a large pastel green contents label in three languages – English and French, which are NATO standards, and Polish – on which every item is listed, though translations can sometimes be very literal. On the list the contents of the outer pack are broken down into MEAL A, MEAL B, MEAL C, and ADDITIONAL ITEMS (the latter being mostly common to all Menu Sets).

The only real difference between Menus 5 and 4 were the canned items: MEAL A had Minced Chicken & Pork Luncheon Meat and Meatballs In Vegetable Sauce; MEAL B had Pork Neck In Sauce With Vegetables; and MEAL C had Tyrolean Luncheon Meat. All large (300g) canned items were pre-cooked and could be eaten cold if necessary, but looked a bit greasy when cold and tasted much better when heated on the field cooker supplied. The 100g and 190g cans were intended for spreading on the Crispbread, of which nine slices were included in each of the two foil packs in each Menu. The Jam and Honey could be spread on either the Rusks (biscuits) or Crispbread.

I taste-tested every item contained in these two ration packs, and also heated a couple of the larger tins on the Field Cooker (the others I subsequently heated in boiling water). All the canned products were tasty, and both the meatballs and the pork neck were surprisingly high quality.

My only minor complaint would be that the menus seem a little bit ‘samey’, but that may be because I have become accustomed to the wide variety of main courses found in UK Operational Ration Packs. The one area where the Polish IRŻ was markedly different from the likes of UK and US ration packs was the brew pack.

Two sachets of instant coffee were included, with just one sugar sachet and no creamer, but the only other drinks were five 15g foil sachets of fruit flavoured tea concentrate; three were Lemon flavour, but the two described as being Raspberry were actually Chokeberry (Aronia). These concentrates can be hydrated with either hot or cold water and are very tasty – I do like these and wish my local supermarkets stocked them. However the tastiest item of all was the freeze-dried fruit sachet, which could be eaten as it comes (by reconstituting a pinch on the tongue) or hydrated with a small quantity of cold water.

The next ration pack I will review is the Polish Individual One-Meal Food Ration picked up from KADAR by Carl at Eurosatory. At the recent War & Peace Revival living history show I also managed to find French and Spanish Armed Forces one-meal ration packs, neither of which I have previously reviewed, so watch this section of JOINT-FORCES.com for more.