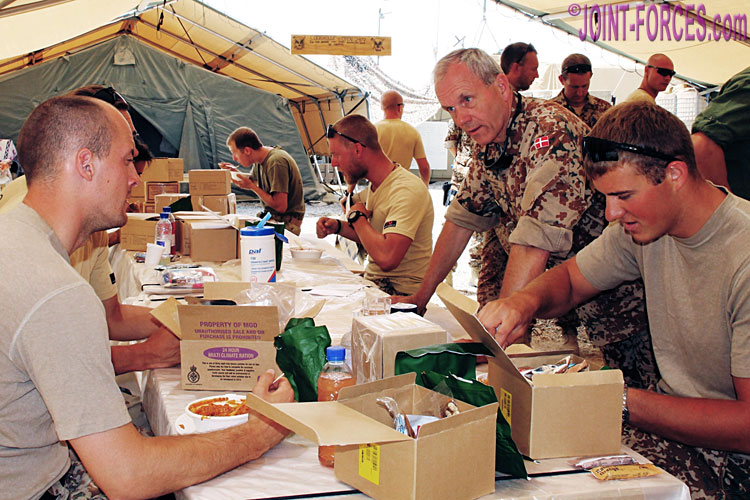 In this latest rations feature, although delving back into my archives again, I move forward to the Danish Summer Field Ration of 2011, writes Bob Morrison.

Danish rations at the turn of the millennium, while adapted to national taste and diet expectations, were not exactly the most inspiring of the many different types I have sampled since my first forays into the field to document military equipment back in the mid to late 1980s.

It was one of Denmark’s ration packs I first turned my attention to way back in late 2008, when I started documenting what troops I had worked with ate in the field, and three years further down the line from my first look at that already six year old carton the Danes had moved forward a bit with their field cuisine. Danish troops serving in 2011 in Helmand Province alongside British Forces did not have their own national specialist Hot Climate Rations and instead had a choice of four types of combat ration available to them to provide quality. These were: the Norwegian Tropical Field Ration, from Drytech; the UK 24-Hour Multi-Climate Ration or MCR; the US Meal Ready-to-Eat; and this, the then new, Danish Summer Wet Pouch Ration.

The Danish battlegroup in Helmand was only 750-strong, and just around 8% of the size of the British contingent it worked alongside, so it was unsurprising that their government did not invest in producing their own version of the UK MCR in what would be considered comparatively small quantities and instead issued a choice of UK, US and Scandinavian (at that time Norway, Sweden and Finland all used Drytech REAL Meals) field rations alongside one of their standard issue rations intended for Northern Europe. Most nations have their own food likes, mostly traditionally based on the most plentiful raw ingredients in their part of the world, and although Danish troops are a cosmopolitan bunch they still have their preferences so it made sense that, while not quite ideal for Afghanistan in the hottest months of the year, the standard Summer Wet Pouch ration packs tailored specifically for their taste buds should also be available to troops stationed in Main Operating Bases where logistics did not present as much of a problem.

In 2011 the Danes had three types of Field Ration available to them, with twelve menu choices for each of these three types, which were: Winter Dry Pouch or Summer Dry Pouch types, with freeze dried meals for rehydration with water, which of course is abundantly available in Northern Europe; and Summer Wet Pouch (i.e. retort pouch ) with boil-in-the bag main meal options. In comparison with what the UK MoD was issuing to frontline troops these newer Danish field rations were not at first glance quite as advanced, but compared to the ones they were replacing they were a welcome step in the right direction and indeed some components had effectively been imported from their American, British and Norwegian equivalents.

The pack featured here is a Summer Field Ration (Feltration, Sommer) which Carl sent back after working in the field with the Danish Battle Group in Afghanistan. This particular carton was Wet Pouch Menu 16 – Chicken Sour / Sweet Pasta and Breakfast Mix with Fruit Cereal ( Kylling Sur / Sød Pasta & Mix m. Frugt). It contained as its main components: a 500kcal vacuum-packed REAL Field Meal pouch of Breakfast Mix from Drytech AS of Norway; a 400g retort pouch of chicken and pasta giving 660cal, from OrifO of Denmark but produced in Thailand; and a 225g foil pouch of apple compote (literal translation apple porridge) from Skandig Food of Denmark.

The sweet & sour chicken pasta was just like any other boil-in-the-bag meal, needing heating for five minutes for best results, but if necessary it could be eaten cold and still provide a reasonably satisfying main meal. The apple compote was basically best described as being a bit like the fruit portion of a Muller Fruit Corner, and could be spooned either cold or warm. If absolutely necessary the Breakfast Mix could possibly be nibbled cold, though only a hamster would probably enjoy it that way, and for maximum benefit it had to be mixed with a third of a litre of boiling water and then re-sealed for five minutes to allow it to reconstitute properly. This was a downside for a field ration issued to troops on operations in an arid theatre where drinking water was at a premium and made it unsuited for those stationed without plentiful fresh water at remote and potentially vulnerable ISAF Patrol Bases.

Earlier Danish Field Rations used to be issued with a block of rye bread, which looked and weighed a bit like a small house brick, but the Summer Field Ration contained four individually wrapped 50g rye slices instead. Menu 16 also contained a 25g RAW BITE (Denmark) organic fruit & nut bar, which I rather liked, a 35g orange-flavoured Rabel protein bar (Denmark) and a 47g pack of three oat biscuits from Bisca (Denmark). Two commercial 20g tubs of cheese / paste and a commercial 25g tub of pâté were provided for spreading on the biscuits. For nibbling, two 30g packs of mixed nuts and a 25g pouch of dried fruit grains (raspberry flakes in this case) were included.

On the accessory side there were two wet wipe sachets, two spoons, three toothpicks and a toothbrush. An Action Meals (US) Individual Flameless Ration Heater of the type found in MREs was also included, along with a resealable plastic bag to contain heater and retort pouch during warming, as no US-style outer carton was provided. For seasoning there were several sachets of salt and pepper plus a sachet of spicy sauce and one of mayonnaise.

Finally to the brew / drinks kit. Two sachets of energy drinks powder and one of drinking chocolate powder, all produced by OrifO, were included along with three teabags, three sachets of freeze dried coffee powder and three sachets of sugar. The whole lot was then loosely packed in a single brown cardboard carton measuring roughly 200x175x130mm or 8x7x5inches. Total calorific value for Menu 16 was given as 3315kcal.

Of all the Danish Field Rations I had eaten over the previous twenty or so years until the original review these were certainly the best, though if given the choice of Danish Summer Wet Pouch, US MRE or British MCR I reckon my vote would have been cast for the latter. Interestingly Carl, who with more than three months embed time in Afghan in 2011 alone had to eat field rations much more than I did, echoed my opinion.