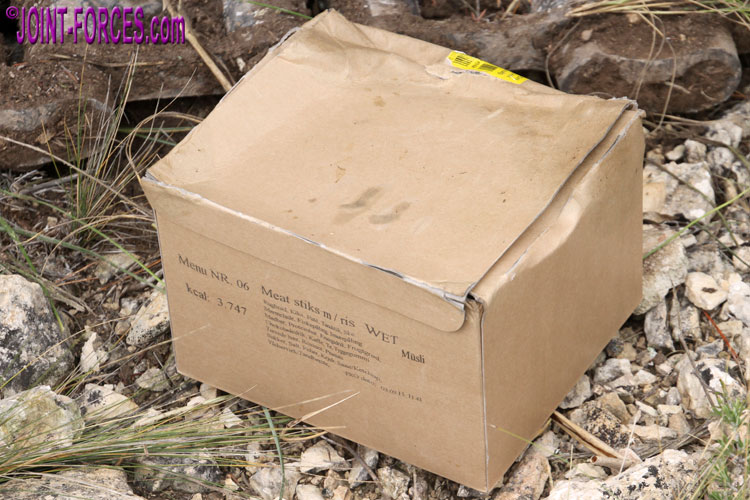 Operational service in Afghanistan prompted some nations to revise their ration pack contents and the Danish Summer Field Ration is typical of this trend, writes Bob Morrison.

The Danish Feltration, Sommer pack covered in the last article, which Carl sent back from Helmand Province in 2011, was an advancement on the standard field rations produced in 2002 and 2005, covered in the first part of this trilogy, but it wasn’t quite there yet.

By the time we next caught up with the Danes in the field, in Chinchilla in Spain for the multinational Exercise TRIDENT JUNCTURE 2015, the summer rations contents had been tweaked a bit further in the direction of healthy snacking rather than traditional set meals. As the UK Ministry of Defence had previously gone down this route in Afghanistan, where the Danes worked alongside British troops in Helmand Province, and as Danish soldiers had been issued UK Operational Rations packs alongside American and Norwegian alternatives while on ISAF duties, this move towards more snacks was unsurprising.

The Danes I briefly worked alongside in Spain in November 2015 only had precisely enough rations packs on their vehicles to last them the duration of the LIVEX phase out on the CENAD Chinchilla training area so I was unable to blag one this time. However during a lull in the proceedings a member of a CV9035 recce team passed me his opened carton, the contents of which he believed to be complete, for me to quickly photograph and I spread everything out on the ground alongside one track of his vehicle for these few quick snaps. Unfortunately there simply wasn’t time to spread them out on a flat rock or bivvy sheet, which I would have preferred to do.

This carton was WET Menu No.6 and it had been packed just a few weeks before, on 3rd September 2015. At this time Denmark issued both WET rations (Dansk Feltration, Sommer ) for summer, with retort pouches, and DRY rations for winter, with freeze-dried meal pouches. At the risk of repeating myself, and of possibly boring regular readers of this section, freeze-dried meals are usually unsuitable for arid theatre deployments as they require precious fresh water to reconstitute and conversely wet pouch rations are unsuitable for extreme cold weather theatre deployments as they freeze and take a long time to thaw and reheat, hence the reason for some armies having to hold both types on the inventory.

Contents listed on the outside of WET Menu 6, auto-translated, should have included: Meat Sticks (i.e. Ćevapi or Köfte) with Rice, Muesli, Rye Bread, Biscuits, Pâté, Toothpick, Spoon, Marmalade, Fish Paste, Spread, Food Bar, Protein Bar, Energy Drink, Fruit Bread, Chocolate Drink, Coffee, Tea, Chewing Gum, Dried Berries, Raisins, Peanuts, Sugar, Salt, Pepper, Spice, Sauce / Ketchup, Wet Wipe, Toothbrush. The only thing from the list I can spot missing from the photos is the Rye Bread, which presumably was similar to the individually wrapped slices contained in the 2011 ration pack, though having said that it should be noted that American-made shelf-stable whole wheat bread (similar to the type found in US MREs and some UK ORPs) was included; I reckon this might have been the Fruit Bread on the list. Total calorific value was given as 3747kcal and shelf life was three years.

Danish troops have recently been serving operationally alongside the British Army again, this time as part of the NATO eFP (enhanced Forward Presence) Battle Group in Estonia, but unfortunately that pesky pandemic and the associated international travel restrictions prevented either Carl or myself joining them in the field for the KEVADTORM 20 exercise. I suspect, however, that as only a company group was deployed out east with the British-led formation they may well have been issued with UK Operational Ration Packs rather than Danish Summer Field Rations.