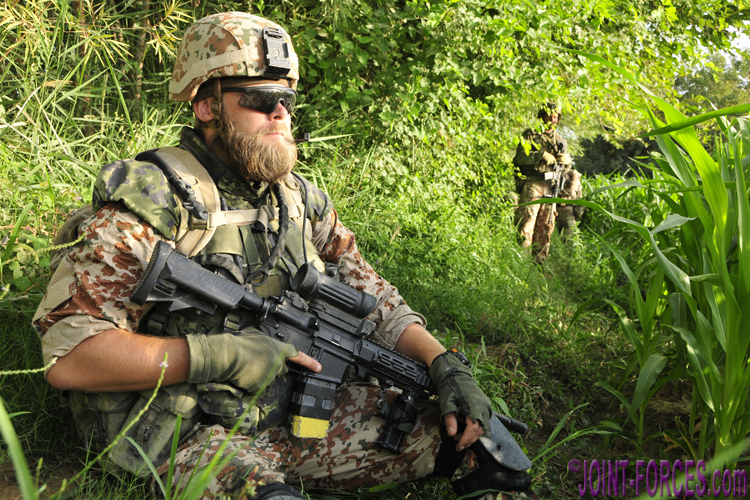 Following on from the Norwegian FSR 2000 of around 2005, in this article we look at the Norwegian Tropical Rations eaten in Afghanistan in 2011, writes Bob Morrison.

As mentioned in Part 29, back in the middle of the last decade both Norwegian and Swedish field ration packs were built around freeze-dried meal components produced by Drytech AS in Troms in Norway, with essentially only language markings differentiating. Danish troops serving alongside British Forces in Helmand Province in 2011 did not have their own national specialist Hot Climate Rations but were given a choice of four types of NATO combat ration; in addition to the then quite new Danish Summer Wet Pouch field ration, which was intended primarily for issue in Northern Europe, they also had access to British (24-Hour Multi-Climate Ration), Norwegian (Tropical Field Ration, from Drytech) and US (Meal Ready-to-Eat) individual ration packs.

Meal packets were issued linked together, though perforated for easy separation [©BM]

The primary reason for the Danes not producing their own hot climate rations was a logical one, as their contingent in Afghanistan, although a vital component in the Coalition both tactically and politically, only numbered about one twelfth of Britain’s contribution. Additionally, as their Norwegian neighbours and close allies produced a hot weather ration with items which catered to some extent for Danish taste buds, and as both their British and American partners in Helmand Province had developed ration packs specifically for use in the Afghan operating environment, it made sense to share.

In this article, to maintain national continuity, we focus on the Norwegian Tropical Rations but later on in the series I also plan to look back at the aforementioned Danish Summer Wet Pouch ration pack. Many UK readers who use camping and outdoor leisure stores will be aware of the REAL Turmat brand of freeze-dried meals produced by Drytech of Norway and it is this company’s REAL Field range of rations, including the same meal pouches, which Norway and most of its Scandinavian neighbours issue to their troops.

A derivative of the previously covered Norwegian FR2000 rations, the Tropical Field Ration variant issued to Danes in Helmand came in the same vacuum-packed and waterproof triple pouch format as the earlier FR2000 and the standard issue Field Ration of 2011, with each pouch broken down to provide a complete meal. Perforations between the three sections allowed meals to be separated for stowing in separate pouches or pockets and as a bonus this allowed soldiers to swap meals to suit individual taste; the down side to this, however, could be that the last man to choose ended up with the dreaded Cod & Potato Stew Menu 4 Dinner, which tended to assault the nostrils in a very hot environment.

The major disadvantage of issuing freeze-dried meals in an arid environment is that, unlike in Norway, fresh or clean water is usually scarce and poses logistic problems [ ©BM]

Two sizes of 24-hour ration were issued, providing 3800 or 5000 calories in total, with the latter being aimed at Special Forces or those on prolonged frontline combat duties; the difference in calorific value being achieved primarily by replacing the REAL Meal main dish pouches with larger versions. In the lower calorie variant five different breakfast meal pouches and thirteen different lunch/dinner pouches allowed eight different menu options to provide variety throughout the week and included in this selection were complete lactose-free, gluten-free and vegetarian options (though this was really only a token attempt at catering for special dietary requirements as nobody could eat the same vegetarian option day after day and one would need to have good mates to repeatedly swap main meal pouches with if you did not want to die of boredom).

The three meal packets alongside a 5.56mm P-mag plus contents of each packet [©BM]

The 5000 calorie version did not have Menu 8 (gluten-free) but otherwise the only major difference between the standard and SF versions was the size of the main meal pouches and the overall weight, which was usually around 1.3kg or 2.85lb for the larger version. The one major downside to these rations, as far as Afghan Ops went, is that they required at least three litres (5.3 pints) of drinking quality water to reconstitute the meals and drinks – okay if you were at a Main Operating Base with good logistic supply, but less desirable if at an isolated FOB or deployed into the field for any length of time.

On opening the package which my colleague Carl send back from Camp Bastion during his embed my spirits dropped instantly as I realised that the triple pouch 5000cal Field Ration Tropical had been separated into individual meals, and although the main light green label indicated it was the Menu 3 option I just knew that I had ended up with a Menu 4 dinner. Yes, my so-called mate of at that time nigh on twenty years, who I have been on the bevvy with in some rather dubious establishments across Europe, from the cold snows of the Arctic Circle to the arid plains of Turkey, had actually substituted Cod & Potato Stew for my Chicken Curry. Come the Day of Revolution, ‘friend’ …..

Joking apart, and assuming one has both a ready supply of drinking water and time to prepare the freeze-dried main meal pouches, the Norgie Tropical rations are actually not too bad. They certainly cater for the Scandinavian palate, with a fish starter (both mackerel in tomato sauce in my sample) included for every lunch and dinner option except veggie Menu 7, plus cod or wolf fish as two of the main dinners, and those who don’t normally eat much fish unless it is smothered in batter and accompanied by chips could find this a bit of a pain. Note: to derive full calorific and dietary benefit from a 24-hour ration pack one should eat or drink EVERYTHING edible that it contains.

Another rather repetitious thing about the Norwegian Tropical rations is that every meal in every Menu included a packet of oat biscuits, to accompany the starter fish pouch, and an energy bar. Now I actually quite like the Havrekjeks biscuits, the Norwegian equivalent of the old Biscuits Brown which every British ration packed contained for many decades. They come packed as three pairs of squares and taste sort of like sweet digestives, but on the downside they are so crumbly that I have yet to see one that has not at least partially broken into crumbs and is fit only for mixing into a paste with the mackerel to give it some body. As for the energy bars, all three of my samples were the same type of caramel-flavoured nutty and sticky grain bar and although I found them tasty enough I would hate to think I had to eat one of these three times every day to keep up my calorie intake.

On the breakfast side, the main component was a pouch of freeze-dried cereal with fruit and, just like the lunch and dinner main component, this took both time and drinking water to reconstitute so not ideal if on patrol or based at a remote forward location. Five different varieties of breakfast cereal were supplied, but vegetarian Menu 7 offered gluten-free porridge instead. All except Menu 1 also included a sachet of jam in the breakfast pouch, and the veggies got jam with all three Menu 7 meals to keep up their calories.

Turning to the drinks, there was a pouch of proprietary brand dried coffee included for every meal, but no tea option, plus an energy drink sachet (requiring half a litre of water) was included for every meal in every menu option. A proprietary brand drinking chocolate sachet was included in all breakfast and lunch packs and a hot blackcurrant drink powder sachet from the same manufacturer was included with every dinner. Accessories were limited to a sterile wipe, two sterilising tablets and tooth-cleaning chewing gum for each meal.

Looking in detail at the ration packs available to our NATO allies revealed that although the average squaddie inevitably finds something to moan about as far as his scoff or scran goes, the choice and variety of rations available to British troops in Afghanistan is probably second to none. It should therefore come as no surprise that our Danish allies, who had their own plus Norwegian and American offering to choose from, could often be seen tucking into UK Multi-Climate Ration Packs. Both Carl, even with his peculiar German taste buds, and yours truly agree with their choice.

Now to the coffee. I am no Jack Reacher but, just like the hero of the Lee Child novels, I do like a decent cup of filter coffee and I am not a fan of the relatively bland powdered coffees issued with most military ration packs. Uncle Sam sends out containerised versions of the big name coffee shops to keep the Fobbits happy at rear echelon bases in combat zones, but for many guys out on the front line in isolated patrol bases a decent cup of coffee, like a cool shower and an even cooler beer, is one of the luxuries they could only dream of ….. enter CoffeeBrewer from GrowersCup.

On his 2011 embed with Danish troops working alongside UK Forces in Afghanistan’s Helmand Province Carl was issued with these CoffeeBrewer pouches, which are effectively a hybrid between a filter coffee brewer and a cafetière (French press). To use just peel open the top, add hot water, seal with the built-in zipper and leave for a few minutes to percolate, then pull a tab to create a spout and pour.

Inside the stout paper outer the ground coffee (24g) is contained in a separate pouch with sufficient air volume around it to allow hot water to circumflush it and extract the drink. A filter separates the brewed coffee from the grounds and when you have served the first cup and a half, or mug, the remainder drops beneath the filter and stops the brewing process, meaning that it will not go bitter like it would if left in a cafetière. Additionally, dependent on the time you allow for brewing, your drink can be mild and pleasant (5 mins) or strong and assertive (8 mins).

Several different varieties, including organic, from African and South or Central American countries are currently available. Check out en.the-coffeebrewer.com for more.