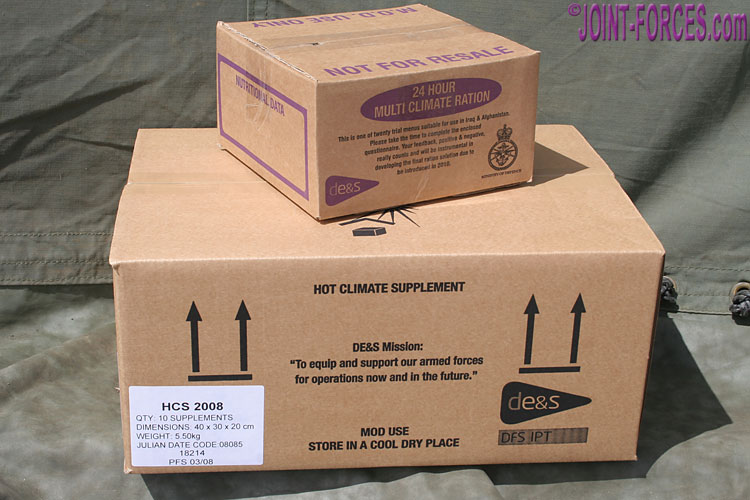 On 25th June 2008, at the expanded 2008 DVD military expo, the UK MoD announced that troops deployed on operations were to get a new food ration, writes Bob Morrison.

This feature is based on two articles produced for the August 2008 and April 2009 issues of the now defunct COMBAT & SURVIVAL Magazine. It forms part of a sequence of features showing the evolution of mainstream UK rations packs from the start of combat operations in Afghanistan, and then Iraq, through to the present day 24-Hour and Individual Meal versions.

Although DE&S (the MoD in-house Defence Equipment & Support organisation) unveiled the proposed new rations at DVD ’08 their introduction was still some way off as field trials of the new menu range would not actually commence until May 2009 and full issue would not begin until 2010. In this neat bit of spin, which attracted widespread mainstream media coverage, empty cartons for the new rations were on display but the new range of foodstuffs to be trialled was not. However, the shindig did give us an opportunity to speak to some of those in the supply chain, plus we were also able to officially get our hands on the 2008 Hot Climate Supplements that are being issued to troops in Iraq and Afghanistan alongside the standard 24-hour Operational Ration Packs (ORP).

The forthcoming 24-hour Multi Climate Ration (MCR) trial would see the number of General Purpose (GP) menus for issue in hot climate theatres increase from ten to twenty, plus each of the specialist menus (Halal, Sikh/Hindu and Kosher/Vegetarian) would increase from five to six, giving a total of thirty-eight variations. Prior to operations commencing in Afghanistan in 2001, the GP Operational Ration Pack offered only seven choices of menu, and each of the religious variant menus was limited to just three choices, but around three years ago the range was extended.

If the MCR menu trials in 2009 proved successful, in addition to a range of new breakfast and main course choices, there would also be a number of replacements. For example, heat-sensitive chocolate bars would removed and replaced with flapjack/energy bars, plus Biscuits Brown, Biscuits Fruit and Pate would be replaced by pasta pouches which could be eaten cold. There would also be a reduction in the hot drinks – tea and coffee – which would be replaced by energy drinks and fruit flavourings to add to water to encourage hydration. Cold breakfasts such as muesli would provide extra carbohydrate and fibre in addition to providing variety to the repetitious baked bean based breakfast. Finally, fruit purée drinks and fruit cocktail desserts would replace the hot custard-based desserts.

The composition of the trial MCR packs was said to have been heavily influenced by feedback from personnel in all three services, including direct input from troops who had experienced eating Operational Ration Packs for long periods on deployments in severe and demanding conditions. Prior to operations in Afghanistan’s Helmand Province it was assumed that in the main troops deployed operationally would only have to survive for a maximum of a couple of weeks on the ORP before better catering arrangements were set up, but the events of the summer of 2006 which saw units in isolated outputs regularly enduring for twice as long, and in some specific cases for almost three months, forced a rethink. As a result, food selection panels to select products for the new MCR were conducted in May 2008.

The official MoD line was that the Multi Climate Ration menu trials aimed “to address the forces’ concerns for the long term and will provide a number of varied and nutritional food items to meet the needs of troops in the harsh Afghanistan and Iraq environments.” Hopefully, the increased variety would reduce ‘menu fatigue’ and thereby boost morale. As anyone who has spent any time in a combat theatre surviving on ration packs will know, even though British rations have long been regarded as among the best in the world, since Gulf War One if not before, there are only so many times that one can face Chicken Stew & Dumplings (2001) or Chicken Arrabiata (2007).

Announcing the Multi Climate Ration trials Lieutenant General Dick Applegate, Chief of Materiel Land said: “Food is vitally important to the morale of our Armed Forces, especially whilst deployed on operations. One of the most important requirements is to provide increased variety to troops operating for long periods on rations which will help reduce menu fatigue. These new menus have been developed to meet the needs of service personnel operating in the extreme climates of Afghanistan and Iraq, providing them with a range of nutritionally balanced meals.”

Defence Food Services project leader, Captain Paul Cunningham added: “The food served to our soldiers, sailors and airmen is well-balanced, nutritious and plentiful and, in the main camps, the majority of our troops eat freshly prepared hot and cold meals, cooked by professional skilled chefs, using a wide range of commercial rations including fresh fruit and vegetables. However, in the remote areas in Afghanistan and Iraq, away from the main camps, it is not always possible to provide meals cooked by chefs from raw ingredients. Under these circumstances we currently provide a range of ten General Purpose, or five Vegetarian, Halal, Sikh/Hindu ration packs that are issued with supplements to reflect the weather. The new Multi Climate Ration trial will double the amount of available menus and remove the need for supplements. We have lots of new items in the rations and I am convinced these will be very popular with our troops.”

Hot Climate Supplement out of its bag – round for size comparison is 5.56mm [© BM]

Throughout the summer months of May to October every soldier issued with a 24 hour Operational Ration Pack box was in theory also issued with a bag of five supplements comprising: energy bars; fruit pouches; pretzels; drink flavouring; and a pasta meal which could be eaten cold.

The recommended daily calorie intake for male soldiers operating in temperate climates is 3600kcal, which was reflected in the composition of the ORP, but in hot weather theatres the need increases to 4000kcal, with the difference being catered for by the HCS.

In recent years, winter supplements to provide the calorie boost required for working in sub-zero temperatures have also been issued where relevant.

MCR Trials
The first of nearly a third of a million packs of the new 24-hour Multi Climate Ration, due for distribution to frontline troops from May 2009 for full-scale trials, rolled off the production line that February.

This new MCR saw the introduction of twenty new menus to replace the ten previously available in the General Purpose (GP) Operational Ration Pack, plus there were six more new menus to meet Vegetarian, Halal, and Sikh/Hindu dietary requirements.

Intended to offer both a healthier option and greater suitability for those operationally deployed in hot climates, the new meals were also designed to give greater variety to troops on frontline combat operations who might have to go for extended periods without access to fresh produce.

The down side to this, however, was that the traditional Biscuits Brown, Corned Beef Hash and Yorkie Bars that some of us old hands pretty much grew up on were replaced with newfangled pasta lunchtime pouches, muesli and energy bars.

In May 2008 food selection panels, including troops who had recently returned from operations, chose the new products for the trials packs, which would be consumed in-theatre between May and October 2009.

The results of these trials provided information for the team working on future long term menu choices for the 24-hour ORP intended for Hot Climate distribution from summer 2010.

In the new packs ready-made soups in retort pouches replaced powdered soups, which took longer to prepare and depended on clean water availability for reconstitution. Pasta lunch pouches took over from pâté or spreads and conventional chocolate bars were replaced by energy bars. Contents of MCR Menu 15 photographed in early 2009 – note how many of the new items are commercial brands [Crown Copyright/OGL: Andrew Linnett]

Muesli was the healthy eating option which replaced corned beef hash, and various fruit pouches appeared instead of oat biscuits. Shrewsbury biscuits and ginger biscuits were in, as were Oreo cookies and choc-chip cake, but Biscuits Brown and Biscuits Fruit were out, along with treacle pudding, which was replaced by rice pudding.

Energy provision of the new packs was boosted to 4000 calories. Carbohydrates provided a minimum of 55 percent of this daily intake, fat provided 30 percent more, and there was a minimum of 12 percent protein. The 10-man Ambient Ration Pack, photographed here in 2008, provided a bulk catering alternative to the ORP when cooking facilities were available at forward locations [© BM]