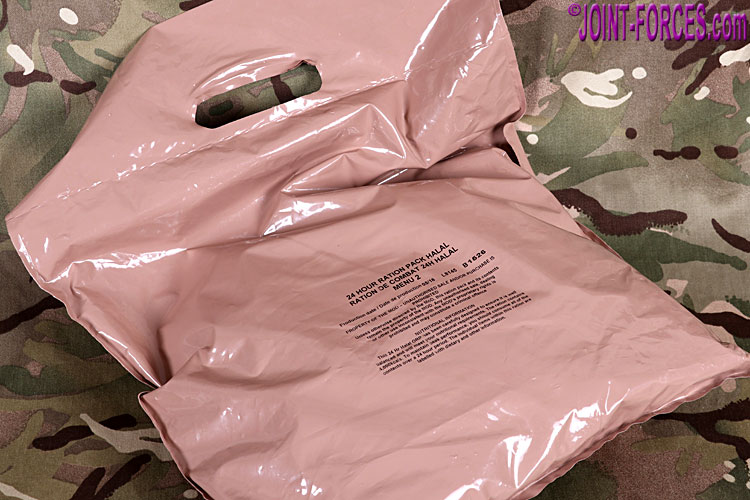 Since around 2018 the UK has moved away from paperboard cartons to polythene bags for holding its individual Operational Ration Pack contents, writes Bob Morrison.

Continuing on the theme of Halal rations, having previously covered both the current US Meal Ready to Eat (MRE) Religious version and the new Bahraini 24-hour Individual Ration Pack intended for those soldiers who follow a strict Muslim diet, in this article I am focusing on what the UK classes as a Cultural & Ethnic (C&E) variant of its standard three-meal 24-hour Operational Ration Pack.

Back in November 2018 (see FR18. SMRP 2018 ~ UK 8-hour Single Meal Ration) I delved into the history of the current seven-year UK MoD contract, which is updated every two to three years, so I do not plan to bore readers by repeating details save to say that when the contract was awarded the original tranche was officially titled Operational Ration Packs 2017 and the second batch was titled Operational Ration Packs 2019 on formal EU notices. On 21st November last a Prior Information Notice was issued for the next batch, Operational Ration Packs 2022, which should see the tender bidding process launched in the summer of 2020 with an anticipated contract commencement date of April 2022. The 24 HOUR RATION PACK HALAL MENU 2 featured here was packed in May 2018 which puts it in the original 2017 tranche.

This pack was given to us for review at the DSEI 2019 expo in London last September, where the ‘new’ rations were being heavily promoted on the UK Ministry of Defence stand. Of course, as regular readers of this section of the website will have spotted, it was really only the tan coloured polythene bag that was new, if having been in production for 18 months is new, and with the exception of different retort pouch meals the bulk of the contents of this bagged Halal Menu 2 packed in May 2018 were not too different from the boxed Halal Menu 4 packed in November 2014. Incidentally, although boxed ration packs were replaced by bagged on the production line in 2018 the minimum 24 month shelf life from Date of Delivery meant that troops deployed on Operation CABRIT in Estonia were still on boxed (06/2017PD Carton B) ORPs as late as May 2019.

to the muesli pouch, as recommended, and stirred it well then left to stand for a full minute before decanting to photograph it, I found it to be a bit dry; I recommend adding a little more water if you want it to be milky. The Mexican-style tuna and pasta dish, which has been in British ration packs for ages, was full of flavour as expected. I found the Steak & Vegetables to be a bit bland, and in retrospect I should have added the Hot Diggidy Sauce; I have been a fan of this sauce since before it was selected for British ration packs and I tend to hold back these little bottles for when really needed. Incidentally, maybe I got a bad pouch but I found the steak to be very fatty and low quality; in fact more like mutton than beef. On the positive side, that Sticky Toffee Pudding stuck to my ribs on a cold January night and kept me warm when I ventured out into the teeth of a westerly gale. Although this ration pack is described as Halal, the meals would not be out of place in a non-C&E pack.

In the next article in this series I plan to look at the current bagged UK 24-hour Enhanced Ration Pack.