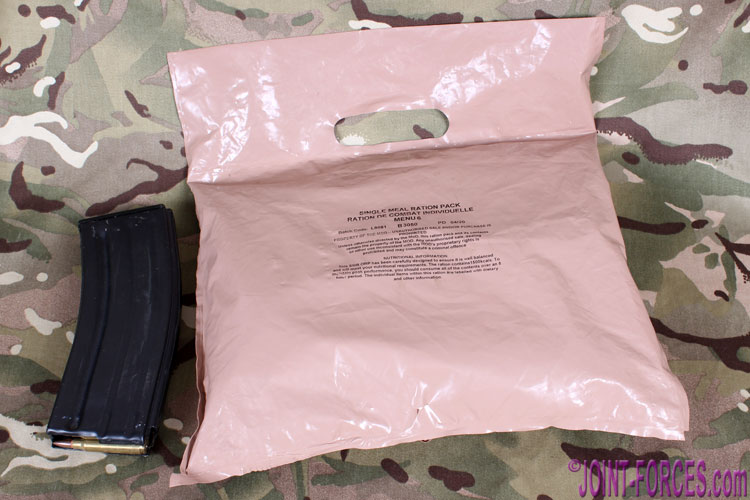 In January 2016 the UK Defence Food Service Team announced a future requirement for a Single Meal Ration including a range of menu variants, writes Bob Morrison.

The Prior Information Notice (PIN) for Supply of Operational Ration Packs, which also covered 24-hour General Purpose, 24-hour Extended, 24-hour Cold Climate, 10-man Group, and Emergency & Survival packs, was short on specific detail on the Single Meal Ration Pack (SMRP) but it did note that it would need to include a Flameless Ration Heater or FRH. This new seven year contract, with an estimated annual value of around £20million, was expected to commence in May 2017 and expire no later than September 2024.

Safety label for FRH on rear of bag [©BM]

Roll forward to December 2017, just a couple of days before Christmas, and a Prior Information Notice Without Call For Competition was issued covering what appeared to be the same seven year requirement with estimated total value of £140,000. In this notice it was stated: “The ration range currently includes, but is not limited to, a 24-hour Individual General Purpose (GP) ration (including Cultural & Ethnic (C&E), Enhanced and Cold Climate (CC) variants), Single Meal Ration (SMR), 10-Man Group Feeding and Emergency Rations.”

The late 2017 PIN, which stated that the 24-hour Enhanced and 8-hour SMR rations are variants of the 24-hour GP ration, confirmed they include a Flameless Ration Heater and gave current annual consumption volume of all 24-hour Enhanced and 8-hour SMR rations as being circa 15,000 and 80,000 rations respectively. We have not yet managed to source an Enhanced 24-hour ORP but in the late summer we were given the new 8-hour Single Meal Ration; it is marked PD20, suggesting a Packing Date of 2020, but some components were produced in early 2018 and all have a projected shelf life until at least September 2020 with a few extending well into 2021.

Main Meal retort pouch and one of the Snacks [©BM]

As far as we have been able to determine, the primary raison d’être for the Single Meal Ration is to feed garrison-based troops, including recruits, who are out on the ranges or training areas between breakfast and dinner mealtime sessions; a great idea… unless you are loaded onto the truck early in the morning before the cookhouse or galley is open and dropped back in base after it closes. Total calorific value of Menu 6, illustrated here, was approximately1500kcal if all edible items were consumed.

Common Components include 3 in 1 Coffee and Tea [©BM]

These rations, which are contained in a tan coloured plastic outer bag – a bit like a US MRE, but not quite as tough – are essentially just a cut down version of the 24-hour Operational Ration Pack and contain almost exactly the same food items we have previously seen. Components are: 1x Main Meal retort pouch; 4x Snacks; 2x Energy Drink Powder; 3-in-1 Coffee sachet; 3-in-1 Tea sachet; Chewing Gum; Tissues; Wet Wipe; Polythene Bag (for rubbish); and Flameless Ration Heater.

There appear to currently ten different Menus in the standard outer carton, with one being Vegetarian. Interestingly, one of the ten main meal options is Halal and two more dishes are of Asian origin (one Indian and one Far East) so it looks like an attempt has been made to cater for Cultural & Ethnic needs.

As can be seen from the illustrations, my Menu 6 contained the All Day Breakfast, BBQ Beef Jerky, Chocolate Chip Biscuits and Cookies & Cream Cereal Bar. The main meal retort pouch contents were okay, though the sausages were not at all appetising and I actually much preferred those I had not too long ago in one of the 24-hour ORP Vegetarian All Day Breakfast packs.

The Flameless Ration Heater, which requires just 60mm of water to activate it, should heat your main course in about twelve minutes but if time is not on your side it is possible to eat these rations cold. Unless something exciting comes in I am going to finish with UK rations coverage for the time being and will focus next on US MREs, first delving back into my archives to find images of older versions and probably ending up with those eaten by 24 MEU on recent exercise in Norway.