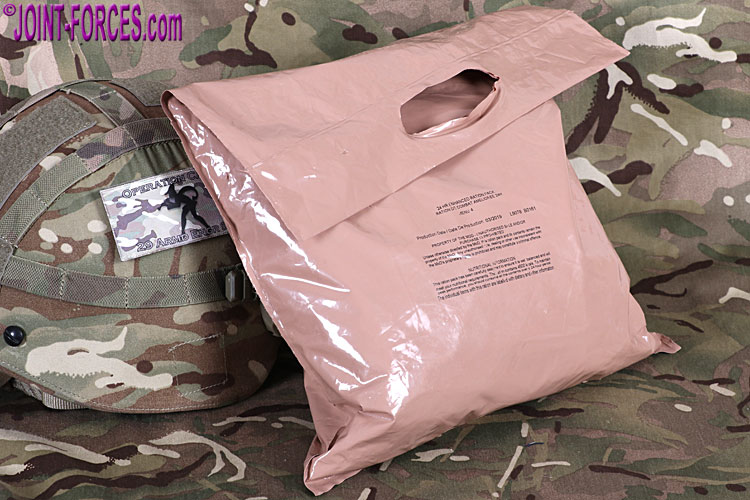 The Enhanced Ration Pack (ERP) is the rarest UK Operational Ration Pack (ORP) variant, accounting for around just one percent of total annual consumption, so we were very fortunate to have been given an in-date example to try; each year the UK Armed Forces munch their way through approximately 1.5 million of the GP (General Purpose) ORP but only around 15,000 of the ECR are produced.

To put this figure in perspective, around 100,000 units of the Cultural and Ethnic (i.e. Halal, Kosher, Sikh/Hindu) variants of the 24-hour ration pack are produced and even 80,000 units of the 8-hour Single Meal Ration (which I will cover in the next article) are expected to be called up during each year of the current two-year contract. I have yet to find any public explanation for the existence of this comparatively small quantity of enhanced rations, which are not freeze-dried so are not intended for Arctic use, but by asking those involved with the combat rations supply industry if they can shed any light on the subject those who are prepared to talk invariably whisper “Special Operations”.

Although an ERP weighs 400g more than an ORP – 2.2kg versus 1.8kg – it still only provides the same Breakfast, Lunch and Dinner meal pouches plus Pudding that one finds in a standard 24-hour ration. However the snacks are slightly tweaked to help provide an additional 500 calories (4,500kcal versus 4,000kcal) and, more importantly, the nutrients balance is believed to have been altered to better suit specialist troops deployed on long range patrols behind enemy lines or in a jungle environment. At this point it is possibly worth noting that the UK Enhanced Ration Pack fulfils a very different role from the US Enhanced Ration General Issue (ENRGI) trialled by the Natick Soldier Systems Center around the cusp of the millennium; the US ENERGI experiment was conceived as a means of providing a lighter weight, low volume, energy-rich food source for troops participating in the early stages of intense combat operations, but I digress.

Back to the UK ERP. The example photographed here is Menu 4, packed 03/2019, and its contents included: 300g Chicken Sausages & Beans, for breakfast; 300g Tomato Pasta Salad, for lunch; 300g Indonesian Style Spicy Rice With Pork, for dinner; 75g Mango Cake, for pudding; 50g Oat Digestive Biscuits; 100g Whole Wheat Bread; 50g Sesame Bar, which provides 267kcal; 100g Mexican Sweet Chilli Peanuts; 42g Smooth Peanut Butter; 50g Lemon Flavour Boiled Sweets; 140g Diced Pineapple In Light Syrup; Tropical, Grapefruit and Raspberry Drink Powders; Cherry Fortified Drink Powder; Hot Chocolate Drink Powder; and a Common Components pack. Like the Halal ORP covered in the last article, the common components were contained in a Reusable Polybag, for rubbish, and included: 2x 3-in-1 Coffee; 2x 3-in-1 Tea; 2x Sugar sachets; 5x Waterproof Matches with Striker; 2x Wet Wipes; 6x Water Purification Tablets; 3x two-packs Chewing Gum; and a plastic Spork. A Flameless Ration Heater, a pack of 10x Tissues and 5g bottle of Hot Diggidy Dog sauce were also loose packed. Note how tea, coffee, whitener and sugar are combined as 3-in-1 sachets, which is a bit of a pain for those who prefer their tea and coffee to be plain, but this can be justified as ditching the sugar and whitener would mean the user was not consuming all nutrients provided in the ration pack.

Taste-wise, there were no surprises in any of the meal pouches. Personally, I am not a fan of the Sesame Bars, which we last saw in the current UN Patrol Combat Ration Pack also packed by Vestey Foods, but as they provide plenty of calories, carbs, sugars and protein in a very compact three-layer block they are a vital energy source. I found both the Mango Cake and Whole Wheat Bread to be moist and tasty, and much nicer to eat than the usually quite bland crackers / biscuits found in many other ration packs. The Chicken Sausages struck me as rather bland, so next time I have these I think I’ll add the Hot Diggidy Dog sauce, which this time I added to my Tomato Pasta Salad to give it a kick. As this ERP has such a high calorific value and I have been stuck at a computer terminal all week, I spread the contents out over two days.

In the next article in this series I plan to look at the current bagged UK 24-hour Single Meal Ration.