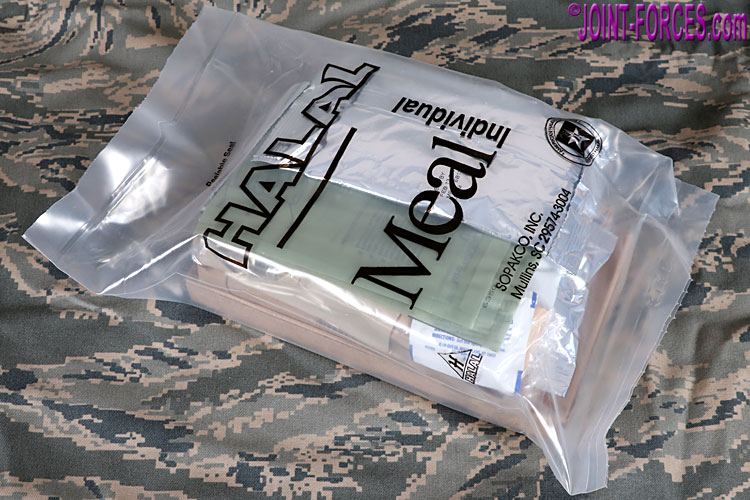 The Meal Religious Ready-To-Eat Halal is one of two US military meal types produced specifically for those who follow a strict religious diet, writes Bob Morrison.

The Halal Individual Meal, along with its Kosher equivalent, is not strictly an MRE but an MRRE, and is produced independently of the main 24-menu MRE contracts. The MRRE also has a considerably shorter shelf life than the mainstream MRE and at delivery to the unit this will be between just 8 and 10 months.

According to current information published by the US Defence Logistics Agency: “The Meal, Religious, Ready-To-Eat, Kosher or Halal is utilized to feed those individuals in the Military Service who maintain a strict religious diet. Each meal consists of one Kosher or Halal certified entrée and religiously certified/acceptable complementary items sufficient to provide the recommended daily nutritional requirements. Each case of Religious Meals contains twelve meals with entrées and component/accessory items.

“Each meal contains an entrée plus a variety of components. In addition, an accessory packet with condiments / seasonings, utensils, flameless ration heater, and napkin is included with the meal. Each menu provides a minimum of 1200 Calories (11-13% protein, not more than 35% fat, and not less than 48% carbohydrate).

“Except for the beverages, the entire meal is ready to eat. While the entrée may be eaten cold when operationally necessary, it can also be heated in a variety of ways, including immersion in hot water while still sealed in its individual entrée package. A flameless ration heater has also been packed into each meal bag to heat the entrée.”

As I have mentioned in previous articles on US MREs the term entrée, or sometimes entree, is used to describe the main course component and not (as in Europe) the starter. All Halal-Approved MRREs, first introduced in 1995 and of which there are currently 12 Menus packed in a single carton, are certified by the American Halal Foundation and carry this organisation’s logo stamped on the outer pouch as well as on the brown cardboard cartons which hold the green entrée and dessert retort pouches. For several years the outer pouch for Halal meals has been thick transparent plastic, rather than the tan colour used for MREs, though the material appears to the same. Our meal was assembled on 13th March 2017 – the code 7072 is stamped on the outer pouch – by SoPakCo, who appear to have been the sole Halal supplier for the last few years.

Halal Individual Meal Menus are not numbered, unlike MRE Menus, so unless you can read the entrée name printed on one of the two retort pouch cartons through the outer plastic choosing can be a bit of a gamble. The main meal featured here was Jalfrazi With Lamb, which would probably have been my first pick if offered a choice of all twelve, and the desert was Chocolate Mocha Pudding. Other contents of this Menu pouch were: four snacks in individual foil pouches; a Lemon-Lime Beverage Base Powder sachet; an Accessory Pack holding 2x Sugar, Salt, Pepper, Toilet Tissue, Moist Towelette, Brown Serviette, Toilet Paper, Spoon and a Book of Matches; and a Flameless Ration Heater.

Although three of the main Halal dishes are of clear Asian origin – Lamb Jalfrazi or Jalfrezi, Dal Marsala and Saag Chole – the other seven could be described as more Western or European in nature. My impression of the Lamb Jalfrazi was that is was reasonably authentic, but very mild for someone who regularly eats hot Nepalese and Indian dishes, though it made a pleasant meal; however I reckon a couple of tortillas would not have gone amiss as roti / chapati substitutes. The dessert was a chocolatey gunk which would no doubt appeal to chocaholics, but I personally found it to be a bit sickly. The snacks included with my meal were Oatmeal Cookies, Energizer Trail Mix, Sweet & Salty Peanuts and Traditional Snack Mix.

In closing this article, I have been assured by a retired British officer and cleric on the UK Kosher rations selection board that in theory both Halal and Kosher (which I have not yet obtained) Individual Meal ration packs can be eaten by those with either Muslim or Jewish strong religious beliefs as the animal products used will have been ceremonially prepared. Incidentally, for those who do not eat pork on religious grounds but do not insist on full Halal or Kosher Approval, all twelve Menus in the standard MRE Carton A (#1 to #12) are deliberately kept pork-free.