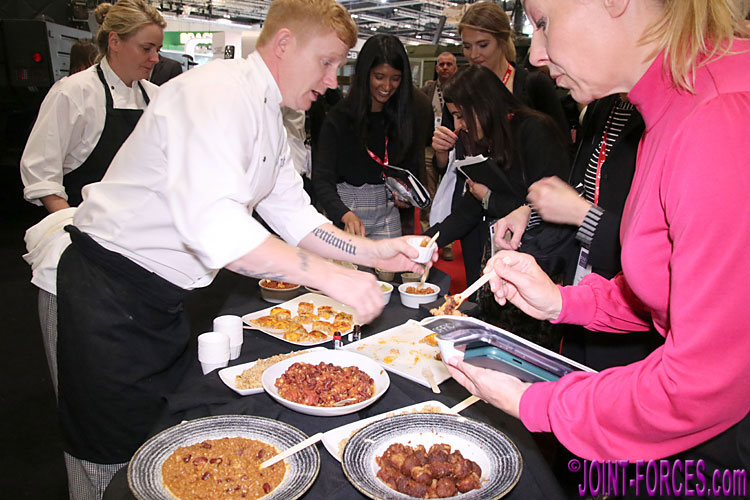 Okay, maybe it was not quite 5,000 visitors that the Staff Sergeant Chef and her Sergeant Sous-chef fed with that wide range of different sample dishes at each of the twelve sessions throughout the expo, but as their stand was right outside the very busy East Theatre where many of the keynote speeches were made every day the food they kept serving up did not last very long on the tables.

Anyone who has been fed in the field by British Army chefs during long exercises, or on operational deployments, will be aware that they can conjure up all sorts of culinary delights using just the bulk 10-man packs issued to field kitchens (see this article for more) and it is not unusual for them to break up the monotony by creating international theme nights. At DSEI this year, by combining the contents of 24-hour Operational Ration Packs (including the Vegetarian, Sikh / Hindu and Halal variants) with the 10-man packs the pair created a wide range of different tastes at each of the three daily servings – even though they had only an improvised kitchen set up in a corner of a loading bay to accomplish their mission.

After sampling the afternoon fare on Day One of the expo I asked Chef if I could visit her behind-the-scenes kitchen, which she readily agreed to, and when I saw just how rudimentary the facilities were I asked if I could bring my camera in first thing next morning to snap the operation before the serious food preparation commenced; as my good friend Jitka is a Head Chef I am well aware that the last thing a kitchen needs when cooking is underway is an outsider with a camera getting in the way. I suspect that many who subsequently tasted the food, including a wide range of breads, that came out of that tiny kitchen area would presume the chefs had a full range of cooking equipment at their disposal but pretty much all they had was a small commercial oven similar to those found in pasty shops and the like, a two-ring electric hob, a domestic deep fat chip fryer, a domestic electric frying pan and a water boiler.

I must confess that I sampled the fare from this improvised kitchen on three out of four days, all in the name of editorial research of course, and everything I tasted was superb. Indeed these snacks were so good I did not bother with lunch on those days that I was able to make it up to the east end of the Excel halls in the early afternoons. Thanks guys.

Above: Other than a small commercial oven this was pretty much all the chefs had to work with [©BM]