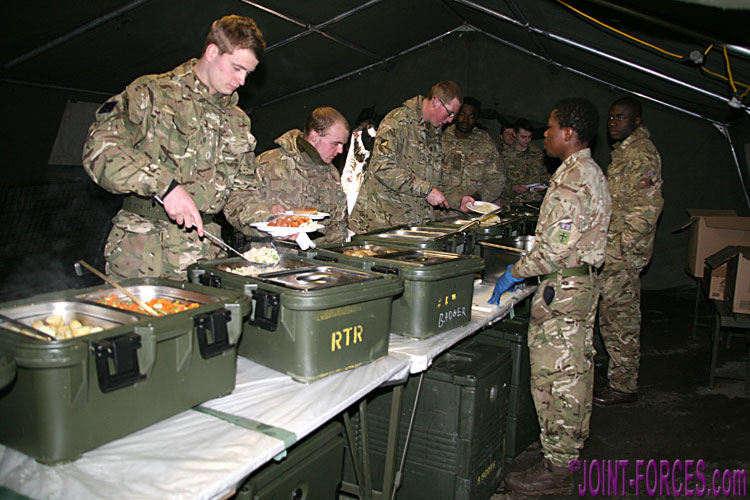 Following on from our run of features on UK Operational Ration Packs and before starting on US MREs in this article we quickly look at the UK 10-man Ration, writes Bob Morrison.

Around the time back in 2002 that UK Forces, most notably 45 Commando and Special Forces, went on the offensive against al-Qaeda in Eastern Afghanistan, close to the Pakistan border, the UK Ministry of Defence introduced a new 10-man Ration Pack for chefs to use in simple field kitchens at deployed locations.

One pack contained the basics to sustain ten soldiers over a 24-hour period but by supplementing with locally sourced fresh fruit, fresh vegetables and bread it was possible to feed more personnel. Based on operational lessons, these 10-man packs have evolved just like the individual 24-hour ORP.

During the 3 [UK] Division Exercise TRACTABLE ’16 on Salisbury Plain, where a tented field kitchen capable of feeding over 1,000 personnel was set up on the Old Carter Barracks site, we grabbed the opportunity to both sample meals and photograph the contents of 10-man ration packs which the chefs were using to feed the hungry hordes on this major logistics deployment exercise. Using just a bank of Kärcher diesel-powered BFK-FC Multi Cooking Modules with associated Hotplates and Ovens plus 10-man rations supplemented with fruit and veg, a Lance Corporal and four privates were able to produce 1,456 portions at both Lunch and Dinner with no less than six different main courses at each sitting!

Each 10-man Ration Pack, of which I identified at least five different Menu Variants, consists of two brown cardboard cartons inside a large outer carton and the batch stacked up outside the field kitchen contained 28 packs on each pallet; i.e. one pallet is sufficient to feed a typical infantry platoon and attached personnel totalling 40 pax for one week. By my reckoning that equates to close on one million calories in a single stack.

We did not have the chance to photograph each item in the pack individually, and our hosts were actually pleasantly surprised that we were paying so much attention to the contents, but we were able to snap components in groups. It is pretty amazing just what army chefs can come up with from those basic ingredients, but one NCO explained to us that they enjoy the challenge of creating new and appetising unusual dishes to break the routine for both themselves and their customers.

Lunch options on the day we photographed in the kitchen included: Hot Baguettes, freshly baked and filled with roast turkey, pork or lamb; Mince & Onion Pies; Bratwurst with Rice and Curry Sauce; Meatballs & Pasta; Fish Fingers; and a Veggie Option. Accompanying sides included Baked Potatoes, New Potatoes, Egg Fried Rice, Baked Beans, Peas, Mixed Veg and Gravy. A salad bar and assorted fruit were also provided along with hot and cold drinks. The evening meal, for the same numbers, was even more complex with a choice of three types of dessert as well.

Over the last thirty years I have been fed by Army, and Royal Navy, chefs on exercises and operations from the Arctic to the Balkans. I have yet to be disappointed by the field catering.

¤ The bulk of this article was first published in COMBAT & SURVIVAL Magazine in mid-2016 before the new owners of the publishing house unexpectedly closed the business down, terminating production of three popular newsstand magazines. Diesel-powered Kärcher field cookers – configured here with hotplate at the front and oven above, though they can also be configured as a bain-marie [©BM]